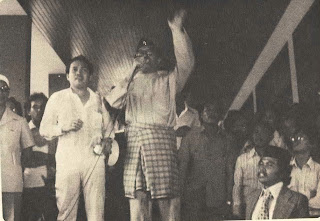 Young Ibrahim Ali with Datuk Mohamad Nasir in the 1977 Kelantan crisis
All praises to Allah.

Through sheer determination, Ibrahim managed to gather "Melayu biasa", devoid of political power, money and capital, and positions but armed with aspiration and determination, to express their voices loudly and gave hope to the almost further marginalised 67% Bumiputera of Malaysia.

Ibrahim and his team at Perkasa and Majlis Perundingan Melayu managed to thwart off attempt by the self serving left leaning Chinese chauvanistic NGOs and activists and hungry and powerful fringe group of Melayu liberal to end all form of affirmative action.

Lastly, the Government announced the establishment of the Council On Bumiputera Development headed by the Prime Minister himself. This was better than their request for reinstate MeCD, or placing MARA under PM's Department.

The joy to Ibrahim and his team from all quarters was that almost all the 31 resolutions of Kongres Ekonomi Bumiputera was being considered and encompassed within the five initiatives of the 10 Malaysia Plan.

Few months back, there was not even a word of Bumiputera mentioned in the unpublished version of the New Economic Model.

The road for Ibrahim and Perkasa had been a rocky one but they perservered. Perkasa was attacked as kuno, backward, racist and extremist by MCA and Gerakan leaders and youth leaders. If it is not out of ignorance, it is then a signal from MCA and Gerakan that they are willing to put themselves on the ancestoral sacrificial altar to stem the rise of any Malay nationalist groups.

A word or two of retaliation from Perkasa can deny MCA and Gerakan of Malay votes and sent them to the back pages of the history books. Ibrahim said he had Chua Soi Lek explicitly told.

Them alone was not enough.

Perkasa's biggest adversary came from UMNO-owned New Straits Times; power and money hungry warlords within UMNO; and self serving Melayu liberal that use to walk the corridors of power and working themselves back in through the three Malay based parties.

Ibrahim believed that the already positioned evil web of Melayu liberals in all strategic areas of media, politics, government, and corporation including the National Economic Advisory Council could continue to impute more damage to the socio-econo-political fabric of the nation.

With the IMF and World Back as their Mecca, they are adamant that liberalisation, openness and competition as the gospel answer to their dream of develop nation lifestyle. They are oblivious to the nation's historical process.

As a nation, Malaysia has always maintain pragmatism in it's socio-economic policies. It had never been caught in the ideological fad of the times.

During the cold war of the 1960-70s and the ideological battleline is drawn between communism/socialism versus capitalism, Malaysia adopted the 5-year economic plan from communist Societ Union and free enterprise in certain segment of the economy from the West.

The strange characteristic of the Melayu liberal is to be oblivious to the negative impact that arise from adopting the unbridled liberalisation and free market policy of Western neo-liberalism.

They naively believe that the simplistic one-policy-for-all solution offered by global business consulting firms will create a free market mechanism that will obligingly serve to meet the nation's socio-economic agenda.

The argument is old but remain relevant.

Malaysia is a complicated mosaic with many fragmentation of disparity which would have inhibited the nation building process of any country.

If not for the tolerance and acceptance of the citizen to the diverse races, geography, social strata, and history of the nation and it's people, peace could not be achieved. Without peace, Malaysia could not have developed to it's present form.

Because it had been taken for granted, peace and security was never understood and considered by the populace, particularly the later generation, as the main driver of growth for Malaysia.

Thus the idea that tinkering with the socio-economic policies using corporate policy from business consulting template will bring about that Western affluence the Melayu liberal desired and yearned for.

Ibrahim will face more challenges ahead. It will be beyond just defending Article 153 of the Federal Constutution but mirroring the inter-generation gap, clash of ideology and civilisation, and revenge of big business interest.

Knives are sharpened to make sure he is buried in the next General Election. He is already accused of threatening the Prime Minister for the agenda he carried. The invisible powers at be want to see him stopped.

It will be left to the proletariat rakyat via voters of Pasir Mas to keep Independent Ibrahim in Parliament. The support for Ibrahim outside Pasir Mas is needed to sooth any disgruntled constituent. At the moment, the Pribumi of Malaysia needs his courage and brevity.
at 6/11/2010 01:20:00 AM

Ya Bro, credit where it is long due and many thanks to Ibrahim Ali and Perkasa for defending the rights of the Malays in the Perlembagaan and what's more we did not even touch what the others have.

For now Ibrahim Ali is the only Malay leader that can unsheath the kris and proudly take an oath that he will defend his race.

I recently visited your blog. By it's makeup, I do not like what I see.

Why should I entertain someone who is both childish and treat me as enemy?

Do remember that at one time, I help promote your blog.

So get lost out of here, forever.

Assalamulaikum,
What about Islam that says all men are equal.....