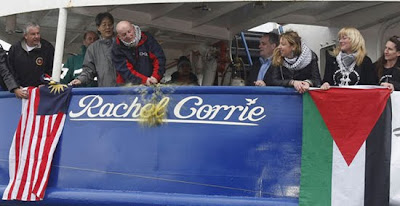 Malaysia strongly demands Israel to ensure the safety of all the humanitarian activists onboard the cargo vessel MV Rachel Corrie that was seized by the Israeli Defence Force early morning of 5 June 2010.

The Ministry of Foreign Affairs is closely monitoring the developments as there are six Malaysians on board the Rachel Corrie.

This is the latest information received from Sufi Yusof.

MV Rachel Corie had been intercepted by the Israeli Navy at around 2:45 pm Malaysian times. It is being towed away to the Israeli Port of Ashdod, the same destination the Israeli had offered for landing but was rejected.

The Israeli had offered Rachel Corrie to land at Ashdod and upon undergoing inspections, the goods will be allowed to be delivered to Gaza. However, Rachel Corrie insist to continue on its mission to land at Gaza.

Our prayers for all those on Rachel Corrie. May they not undergo what the earlier flotilla had to go through.

An official communique will come out from Ministry of Foreign Affairs soon.

Below are SMS messages received from Matthias to his son, Christopher Chang:

(Note: KL Time is approximately 5-6 hours ahead of Rachel Corrie)

The latest communication between Sufi Yusof and Shamsul Akmar aboard the Rachel Corrie at 9 am did not confirm of any boarding.

On-board video by a reporter

Secret video by a reporter

Censored footage of Gaza Flotilla boarding "cooked up" by IDF

Another IDF propoganda spamming You Tube
The Jeruselem Post here reported a fake report that the Rachel Corrie is boarded.
at 6/05/2010 04:00:00 PM

Oh. The Israeli newspaper which propogated Anwar as the next Prime Minister of Malaysia.

It's good that you have direct contact with Malaysian passengers on board. I've been updating the situation in the wee hours of the morning in my blog, but I don't have the contact that you have and have been relying on internet reports.

You are right, we can't rely on the Israeli and western media. The Israeli media especially have been engaging in a disinformation campaign.

Nevertheless, your report seems to be consistent with reports from The Free Gaza Movement and Y Net News.

Incidentally the Free Gaza Movement is also updating minute-by-minute through its freegazaorg twitter here. According to the twitter report, which remains unconfirmed, the Rachel Corrie was stopped in international waters at about 10.30 am and a request to ship to identify was issued, but there was no boarding of the ship yet. The ship still refused a second call to go to Ashdod.

It sure look like a standoff with either side refusing to yield. Let's pray nothing untoward happens.

We try the best that we can do.

What the Israelis did was beyond the international law.

What exactly did Hitler see in Jews back then?