Give credit where it is due for PM 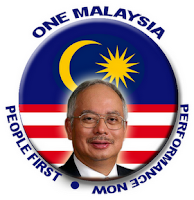 Prime Minister, Datuk Seri Najib Razak is due to present the 10th Malaysia Plan and the New Economic Model in Parliament tomorrow.

Najib has outlined his plan by introducing what he described as the four pillars towards achieving the Vision 2020 develop nation status.

Probably it is coincident, Merdeka Center published its latest opinion survey claiming 72 per cent of Malaysians are satified with the Prime Minister's performance. This is higher than the 69 per cent rating he received in April.

While this blogger is rather cautious with Merdeka Center survey results, it is nevertheless a much needed booster for Najib. He was rather taken a back, when his New Economic Model was rejected by the recent Kongres Ekonomi Bumiputera ke 3.

The survey do say that confidence levels in government's initiatives were limited. For example, only 50 per cent were confident that initiatives such as the Government Transformation Programme (GTP), 1Malaysia and New Economic Model would be able to achieve their goals.

It does not reflect the true picture of the GTP. Within three months, it has begin to deliver results.

This only shows the increasingly cynical sentiments of the public. And, 58% of the survey view that 'the Federal Government was good in planning but weak in implementation'.

The perception is not necessarily true. There have been progress made here and there. For instance, there are 97 convictions from arrest made by MACC reported on its website. Some 2,665 contracts published online.

Unfortunately, public expectation on the eradication of corruption is far from met. For this blogger, nothing short of rolling the head of few big fishes is satisfactory. Names like Tan Sri Nor Mohamad Yakcop must no more be on the Cabinet and be facing thorough investigation by MACC.

In the area of crime, overall crime have dropped by 15.1% and redeploying police to hotspots have managed to reduce street crimes by 36.9%.

The difference between public sentiment or perception and real results is a concern. It shows the ineffective Najib's communication team.

The statistic given by Pemandu mirrors the survey.

Out of 44,653 hardcore poor listed, 12,453 are no more considered as hardcore poor. there have been an increase in LRT ridership by 928,775. There have been 929 pre-school started and 7,616 primary schools are ranked to promote school quality.

Economy-wise, the GDP first quarter registered a 10% increase. Malaysia have been recently ranked 10th most competitive nation in the world. Things are looking better.

Voicey,I want to be honest that Najib is working harder to be near to the Rakyat that Pak Lah.So,it is not surprising that his ratings have gone up BUT HE WOULD HAVE TO GET RID OF CORRUPTION if he want to survive the next election.Congratulations to Najib.

I am a bit wary about the percentages given.

We have seen it before during Pak Lah's administration where some people can manipulate the figures to satisfy the leaders when the reality are far from the figures.

Quite hard to credit someone when advertisement for glamour the rakyat have to cough out the money.....?

Th Merdeka Center Chief admitted that the result (DSN' popularity) may not necessarily translate into winning the coming election. It means the Centre's results do not have the same credibility and reliability as those polls in UK and USA. Remember how accurate they predicted hung parliament in recent UK election?

It actually means Merdeka Center tell us "Don't trust me".