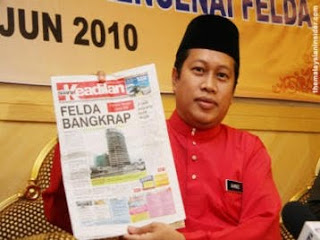 The perception that "Felda" bankrupt being perpetrated by Suara Keadilan in their June 22-29th 2010 issue is totally absurd and a lie.

Many felt Suara Keadilan and PKR officials deserve to be sued by "Felda" because it could affect their reputation and overseas ventures.

This blogger beg to differ on the action and felt it to be unnecessary. Furthermore, lawsuit just ain't enough.

The fact that cash position of "Felda" is reduced from RM4.08 billion to RM2.73 billion for 2009 doesn't tell anything about a tightening situation. Felda is a cash rich company with its huge cash reserve known to be floating in our money market.

Note the inverted commas used for Felda and other terms later. It will be explained later. In this case, it means almost Felda but not exactly Felda. Suffice to say, it is indicative of "Felda".

"Felda" cannot go bankrupt as the perception game being played by PKR. It has 340,000 hectare plantation and total asset rose from RM9.17 billion for 2004 to RM15.37 billion for 2009. There is no lawsuit or any judgement executed to adjudicate bankruptcy.

Perhaps some will argue that what about the liability side? Old blue chip Sime Darby can fail when untrained hands and robbers have a hand in the cookie jar. That is a possibility but all this talk of bankruptcy arise because Idris Jala couldn't shut his f**king mouth.

What is really needed upon "Felda" to improve their transparency and information dissemination. Felda could easily dispell such slander with preemptive public relation and media strategy. They have no problem to get media coverage thus, there is no need for the lawsuit.

For assurance, the simple logic that it has huge cash reserve and Banks are licking their kneecap to give them loans only shows they do not have high borrowing. Their six years average net profit from plantation is RM1.1 billion. There is no issue of them not meeting their financial commitment at all.

The rumour that Felda Global Venture was facing losses could be simply dispelled off based on reason that they were new investments and still awaiting to bear fruits. In Felda, they are used to waiting five years for oil palm tree to begin harvesting their fruit.

Having said that, do the officials at "Felda" understand what is Suara Keadilan doing?

Dato Ahmad Maslan explained it briefly in his press conference yesterday that PKR is targeting the safe BN stronghold seats at the Rancangan Felda. Other than some rancangan in Jerantut that was filled up by PAS members during Dato Asri's time at Kementerian Tanah dan Galian, most of Felda settlers are BN supporters.

That still doesn't mean the "Felda" officials understood what was happening. As far as PKR is concerned, they need to instill amongst Felda settlers some doubt in the management of Felda.

Imagine, if 1,000 copies of Suara Keadilan is bought and left at coffee shops for public to read. Assume 20 people read it or at least saw the headline, that means 20,000 people were made known that Felda is bankrupt.

This is still assuming they do not believe it.

All it takes are some grouses of Felda settlers over some administrative issues with management or bureaucrasy caused problems to prolong. Then some instigator will start to remind of this Felda Bankrup news on Suara Keadilan. It will then spread like wild fire and have a life of its own.

If the Felda officials attitude is to say, "jangan layan fitnah" and claim the moral ground that "people will know and appreciate them" because they are honest and capable, their situation can be described as good as mampus.

Allow me to correct something here. Common people are not concern to know what is happening in Felda.

Members of the public with concern for public issues are small in preportion. Majority of them tend to be critical. They have a tendency to seek for untold stories and so-called inside information because they believed mainstream newspapers are not free.

The Felda officials thinking that "the truth shall set them free, hellalujah" must be naive to think so. Once a negative perception sinks in, it is very difficult to change, even with facts and figure. Try to reverse the perception of that PAS demonstrator lying across the road with a Palestinian flag to hold up a car.

What more with our bureaucrat tendency to just go by a simple "nafi nafi" to dispell false allegations without giving convincing details?

Now, the explanation for the quote and unquote used earlier.

Take for instance, the "Felda" press conference by Dato Ahmad Maslan yesterday. He himself couldn't exactly answer with confidence a question by a blogger on whether the RM15.37 billion was total asset or net asset as in after netting liabilities or net as in revalued assets.

This is not to blame him because he is not financially trained. The two officials next to him shouldn't be keeping bisu like a pengantin but speak up and explained. They were saved because the blogger decide not to drill them further to avoid embarassment.

Then the issue of "Felda".

What is meant by "Felda" and all these numbers? There are many "Felda"s - Felda Corporation, Felda Holdings, Felda Proper and Koperasi Felda. Excluding the subsidiaries, there is also the new entity set up by Dato Mohd Bakke Salleh called Felda Global Ventures.

Where is FGV in the scheme of thing is confusingly explained by one official. Not because it was not understood, but because it does not made sense why it is placed above certain entities.

The usual attitude of Government officials when stuck and unable to explain, they go on their "we-know-better" excuse and body language. The question is not explained. One do not know if he does not know.

All these points to the need for Felda to be clear in explaining their position and not be too secretive. Being secretive these days, it only made one more mysterious and attracts more speculation.

Felda cannot afford not to take preemptive measures. Otherwise, they will fall to be come victims of irresponsible political perception game based on lies, misinformation and slander.

Will their lawsuit helps? By right, the lawsuits should shut the mouth of the other side from talking about the case. But that did not stopped Anwar and PKR from spreading lies about his sodomy case, did it?

Having known the answer, answer another one. How long before these lawsuit will reach the court and get judgement? I'll rephrase. How many years before bicara even begin?

By then, many Rancangan Felda voters bought into the lies and end up voting Pakatan. If bicara only about to start, they could direct the Felda lawyers to withdraw the lawsuit. Because they could already be in Government.

The duped voters would only realised a bit too late. By then, just like what happened to Penang Malays today, they only realised they are now further racially discriminated and marginalised. They realised too late the danger of voting DAP out of anger.
at 6/26/2010 03:00:00 PM

Hmmmmm you're right. But it's only through the Lawsuit that we can get the full picture on Felda's Accounts provided the Court Allow the Defendent Access to full Details of Felda's Accounts.

Is FELDA's management so confident as to be willing to Bare FELDA Naked in Court? We'll See!

Before PKR came to be born, we had very little of this type of talk which were not adequately justified and validated with facts and data. Or should we say that then we had not credible enough business analysts like we do today and we have many more "con"-sultans now. There should be almost equivalent number of "con"-sultans from PKR as well as BN who are feeding people in poltics craps which should not make news at all. If Felda is to fail, there must be signs just like the winds before the thunderstorm. Someone's hole is drying... and we get this news.

Voicy,definitely FELDA is NOT BANKRUPT.But THE INSTITUTION that is BANKRUPT is the GOVT OF MALAYSIA.FELDA must be careful of the KAKI RASUAH politicians who will want to strip FELDA of all
its assets just like what have happen to the govt assets like JET ENGINES.

Do agree that because of that drop of nila (real or not) a whole belanga of milk will be ruined. The common layman reads just the headlines and does not bother to read and investigate further. I learnt this in my financial management classes where we analyse brokers' reports with bombastic headlines, and its impact on stock market.

As a consultant, I get to work with the top companies in the world. The media strategies by these companies are truly impressive. Oil spills and rogue traders can be made to go away in a blink of the layman's eye.

What does it take before our government learns advanced media tactics?

Isn't APCO supposed to advise the Government on That and at such a hefty fee too!?

Maybe they should employ you instead?!

One thing I know is that those FELDA Folks are not as stupid as they were in Tun Razak's time, what with Children Educated Inside and Outside the Country.

What matters now is to get to the bottom of FELDA's Activities....
And that means A thorough Audit by A Highly Reputable Accounting Firm.
Is FELDA Management up to it?!!

APCO is for Government's international PR.

That sweeping statement you made in the final paragraph about Penang Malays-its debatable. Which Penang Malay are you referring to? Certainly the ordinary Penang Malay does not feel worse off, compared to the previous BN government.

Sweeping as it is, I don't think you can speak for other Penang Malays to.

When I wrote it, I had the Do Re Mi and other kedai makan being torn down in mind.

The reason claimed to be it would potentially obstruct traffic.

Interestingly, Chinese hawkers already blocking roads had the road block for them.

That is color blind Malaysian Malaysia or Middle Malaysia for you.

I beg to differ.

Bankruptcy is a legal term. Read Hantu Laut on this.

Upon reading it, ask yourself whether the Government could be legally bankrupt?

In fact, Greece is not legally bankrupt.

Idris Jala claim of banruptcy is a questionable analysis based a two-variable BCG four quadrant bullshit!

He bloated the subsidy figure of RM73 billion. Education and another item is not subsidy but social services.

I don't know but the RM133 million con-sultancy bill paid by Pemandu can cause Government to bankrupt, perhaps.

Let me state at the outset that I don't think Felda is bankrupt nor do I recall anyone saying they are.

But, there are so many billion $ figures being mentioned by Felda, it's enough to confuse any accountant let alone the ordinary person in the street!

And yes, Felda should improve its PR so that it's management and performance is not unfairly questioned. Whether Felda is sick or worse can only be known if they release full financial statements for accountability and transparency.

According to Mr. Najib, Felda is not bankrupt. Bankrupt are those people who says these baseless obligations...But the true come out with investigation only....Declaring Personal Bankruptcy