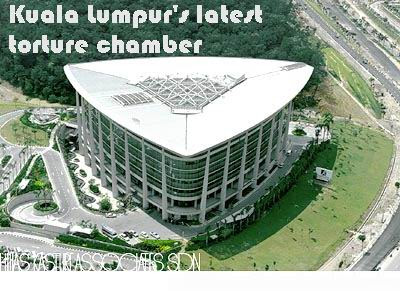 Securities Commission (SC) made a press release to deny allegations by reporters, editors and NUJ.

It is a sheer lie.

Rocky described an ordeal Dalila Abu Bakar had to undergo yesterday. Taken from his blog below:

Dalila Abu Bakar told me the Securities Commission investigating officer wanted hto subject her to a body search. They wanted her handphone and refused to believe her when she said she had left it at home.

The IO brought into the room a lady officer by the name of Mastura, who is physically ok to pat down Big Dog, if necessary, of so I imagine. The body search was called off after Dalila told them to go on a make her day.

"I asked her what if I had my phone in my undies, and she said she will come and get it from me. That's when I lost it. I told her if she comes near me, I'll throw the chair at her".

I suggest that a press conference is organised and have all the investigated reporters reveal what happened.

They should all refuse en-bloc to cooperate in the investigation unless a lawyer and witness is present together for the interrogation.

If possible, have MPs from both side of the divide present together. Just thinking out loud in anger.

PETALING JAYA: The Securities Commission (SC) says it has been professional in handling the investigations of four business reporters in connection with the sale of shares in Kenmark Industrial Co (M) Bhd.

It said in a statement in response to a news report that quoted various sources, including the National Union of Journalists, about complaints on the manner in which the investigations were conducted by its officers.

“These are the rules and procedures prescribed by the law, which we abide by strictly. The statements from witnesses are taken by experienced officers and we have full faith that they have acted professionally throughout,” an SC spokesman said in the statement.

“Our effective enforcement of the securities laws depends to a large extent on the assistance and cooperation given by witnesses. Given the nature of the cases we handle, we have had to call in people from all walks of life, including members of the media.

“We are grateful that in most cases, the witnesses have been very helpful, cooperative and forthcoming, and this has led to the successful prosecution of many cases,” he said.

There were rules and procedures in law that they must comply with in recording a witness’ statement, he said, adding: “We conduct interviews only during office hours, unless witnesses request to have their statement recorded after-office hours or are willing to extend the statement recording session.”

He said where required, they had accommodated the wishes of the witnesses in terms of their schedule. “As a matter of practice, we break for lunch, although some witnesses prefer to proceed during lunch. In addition, we also allow cigarette and other comfort breaks.

“Where appropriate, witnesses are also offered the option of stopping and continuing the giving of their statements on another date. These are all documented. Witnesses are then provided the opportunity to read and review their statements, make changes and are required to sign the statement,” he said.

The Star and the Government

1-The Star is owned by MCA.

2-Its stances are generally anti-government; meaning it always put government or its agencies in negative light.

3-Is MCA anti-Government (read: anti UMNO)?. Its ministers can annoy the Malay communities (JPA scholarship vs MARA), but an UMNO members must be charge in court for sadition (PM's former aide.

How long can BN last?

Go for it. I support challenging the SC!!

We must protect press freedom and journalistic integrity!

I think it's a bit premature to call the SC a liar using just a statement from the journalist involved.

As an example: A girl who joined us, accused a current staff, of sexual harrassment in their previous workplace. With no police report lodged, we had no way to proof what was the truth so we had to play a careful game and separate both.

I think we need to wait for this seluar dalam episode to play out for the truth to emerge.

As an aside, I am angry at SC's handling of this issue. When will Malaysian bodies/companies learn to pre-empt the media response? A lot of PR damage has been done already.

I hope they have the wit to keep CCTV recordings, in case one of the reporters dies in custody.

"Our effective enforcement of the securities laws depends to a large extent on the assistance and cooperation given by witnesses. Given the nature of the cases we handle, we have had to call in people from all walks of life, including members of the media."
UP yours, I say. I am UPPING mine

as sc ceo, she is not the hakim besar, merely an officer
administering a quasi-judicial thingy aje. so her decision
is always subject to review by de mahkamah dinggi

Awesome post. Do you mind if I ask what your source is for this information?