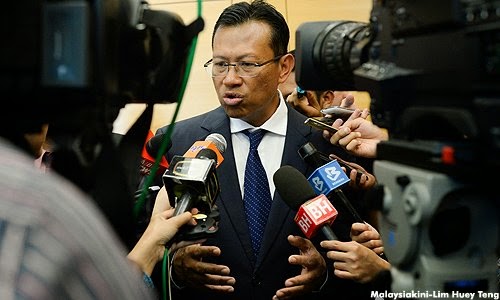 For quite sometime MCMC Chairman, Dato Sharil Tarmizi had been receiving the brunt of the blame for the slow action on rouge social media users.

The complain then was that he was slow in taking action or did not take any action. It had come to a point where it was perceived that the authoritiees was quick to take action with pro-UMNO bloggers but slow when it comes to pro-opposition bloggers.

There are several reasons.

The announcement on Halim in NST:

Halim, 65, is currently the chairman of Telekom Malaysia, a non-executive position he has held for close to six years after his stint with MCMC ended. He had served as MCMC chairman from April 2006 until May 2009.

Before joining MCMC, Halim was secretary-general of the Ministry of Energy, Water and Communications where he served for six years.

“I am happy to announce that Datuk Seri Dr Halim Shafie has agreed to come on board again,” Ahmad Shabery told Bernama.

“His tenure will be for two years and I have assigned specific tasks for him to achieve. These include looking at good governance, which is in line with the government’s efforts for all ministries and agencies.”

“Among others, Halim will be working on decoupling the role of the chief executive officer (CEO) from the role of chairman of MCMC. I feel this is important for MCMC in ensuring continuity and the balance of power within the organisation,” he added.

According to the minister, Halim was also expected to review the Communications and Multimedia Act 1998 towards a healthy cyber space.

“What happened during the East Coast floods last year should be prevented from happening again. Although the law is not likely to prevent it fully, we hope that people will think carefully before they share information which is unverified,” said Ahmad Shabery.

In a crisis situation, this sort of irresponsible behaviour might cause chaos and make relief work more difficult, he added.

Halim, who is also the chairman of the Multimedia University, is well placed to assist Ahmad Shabery in advancing the minister’s digital agenda for the nation. -- Bernama

During the flood, some 14 people had been advertised to submit themselves to police investigation for distributing false information on the social media with the intention believed to create chaos and bring out the anger of people towards the relief effort by government.

The motive is political as it serve to discredit the government by amplifying the distress situation in Kelantan and claiming the flood victims were not taken care off and rescue effort were selective.

RBA had been pushing the envelope to question the position and practise of Islam and also hurling abuse at Malays. The latest incident involves, Lawyers for LIberty, Eric Paulsen whose twitter abuse may have finally found it's limit.

The pro-opposition portal assumed that Halim's return to MCMC marks the beginning of tighter control on the Internet. FMT reported: 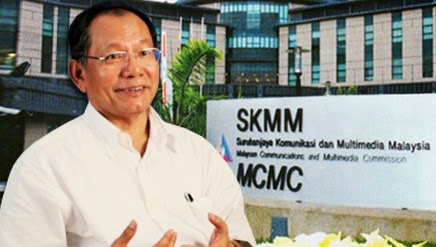 KUALA LUMPUR: Telekom Malaysia chairman Halim Shafie has been appointed the new chairman of Internet regulator MCMC for a two-year term, returning to the post he last held from 2006-2007.

Communications and Multimedia Minister Ahmad Shabery Cheek, who announced the appointent today, said one of Halim’s tasks would be to separate the role of chief executive from that of chairman of MCMC, the Malaysian Multimedia and Communications Commission, which oversees the Internet as well as broadcasting.

“I feel this is important for MCMC in ensuring continuity and the balance of power within the organisation,” the minister said.

Halim was also expected to review the Communications and Multimedia Act 1998 towards a healthy cyber space.

Halim, 65, who is also chairman of Multimedia University, replaces Mohamed Sharil Tarmizi, whose three-year contract as chairman was not renewed, after an 11-year career with the regulator.

There had been speculation within the industry that Sharil’s was removed for failing to take sufficient steps to clamp down on dissenting views on the Internet as demanded by pro-Umno factions.

Ahmad Shabery hinted of this when he said: “What happened during the East Coast floods last year should be prevented from happening again (in a possible reference to rumours and false alerts that were floated through social media).

“Although the law is not likely to prevent it fully, we hope that people will think carefully before they share information which is unverified,” said Ahmad Shabery.

In a crisis situation, this sort of irresponsible behaviour might cause chaos and make relief work more difficult, he added, Bernama reported.

The minister said: “This year, the focus will be on all aspects of digitisation for the country. I am keen to pursue a digital initiative which will cover both hard and soft infrastructure.

“We need this if Malaysia is to remain competitive as a nation. In addition to focusing on content development, we also need to constantly address issues like quality, speed and affordability.”

Ahmad Shabery also said that he would be expecting MCMC to play the lead role in implementing this and Halim’s wide experience in these areas would be an asset to the organisation, and in helping him progress this digital initiative.

“I had to persuade Halim to come out of his semi-retirement to help me with all these tasks. His first comment to me was that age was not on his side,” Ahmad Shabery said.

But the minister is confident that having served the nation for so long, Halim’s public service background, sense of commitment and dedication as well as his corporate experience gained in the last few years would augur well for MCMC and the industry.

On the former MCMC chairman, the minister wished him well for the future, thanked him for his efforts during his tenure and said, “we all appreciate his commitment to the job.”

Halim, who has a PhD in information transfer, has been a lifelong civil servant, from the Education Ministry to Intan, the civil service school. He was responsible for setting up the National Computer Centre and Management Technology Centre.

From the report above, Halim role does not seemed for mustering up at the enforcement role of MCMC.

Under Sheril, the major term of reference for his appointment was towards the development of the industry in which he was responsible to draft the Communication and Multimedia Act (CMA). MCMC was only given a budget for an 8 man staff for enforcement role. How much can be done?

In a government set-up, the bureaucratic process to expand the staff strength and create new positions takes forever. The organisation that was set-up for development cannot be tune for enforcement.

There was a case of one newly set-up agency with such wide ranging power and multitude of role in which staff are taken in from several other department an agencies. It ended up into a chaotic organisation with the direction going neither here nor there.

There was an incident in which a group of it's personnel deserted under a line of fire since they are not trained for such situation. So the best thing is for MCMC to passover the enforcement of cyberspace to police. They are more cut out and trained for such a role.

Furthermore, the latest appointees of MCMC indicates Shabery is looking to either increase bureacracy at the Board of Comissioners level or spend more money to dish out contracts. [Read earlier posting here.]

In the meanwhile, another former civil servant, Tan Sri Sulaiman Mahbob was appointed to replace Halim as the new Chairman for Telekom.

This is better than the growing annoying MP that aspired for the post. He was a former Chairman of the Tender committee but was detected to have given out contract to his own flesh and blood brother. Yet he is loudly talking about virtue, values and accountability.
at 1/12/2015 08:26:00 PM