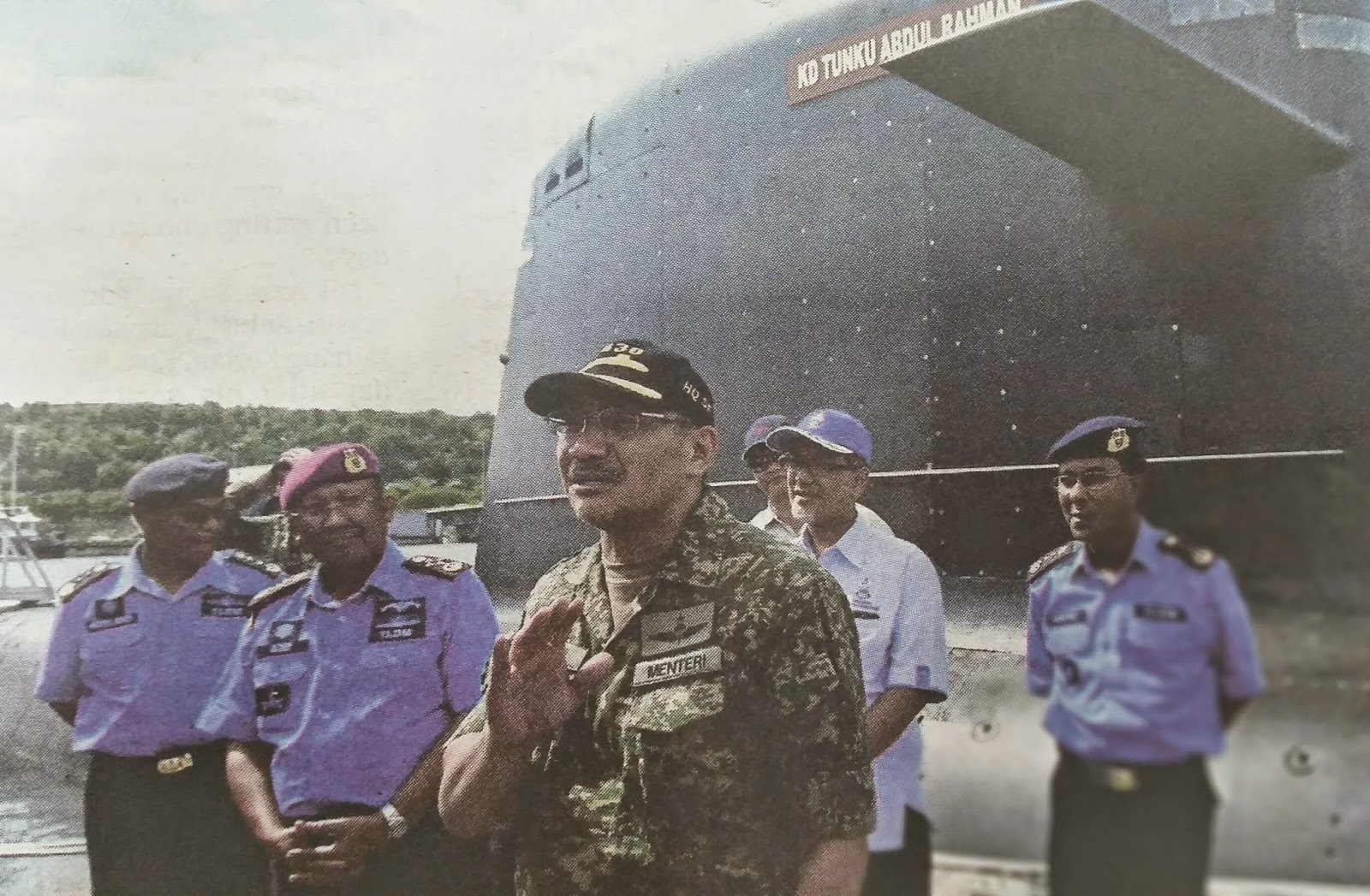 Defense Minister, Dato Hishamuddin Hussein Onn was in Kota Kinabalu yesterday to complete his 3 day tour. He visited the Royal Malaysian Navy base in Telok Sepanggar and was given coverage by  NST today in page 10.

The top page news would only be of interest to those avid military buff but the one below is a political puller.

At a time, when there is supposed to be a truce, there is no a need for Hishamuddin to make further comment.

It is similar to him disputing Dato Dr Zahid Hamidi statement that previous Ministers have made similar correspondance to foreign agencies like FBI. Hishamuddin's name was not mentioned but he had to make a denial after the FBI letter issue has died down.

It gives the impression that he is not comfortable or he wants to fight and keep the Zahid issue burning. Subsequently,  FMT got a statement from a previous Home Minister, Tan Sri Syed Hamid Albar. Only thing, Syed Hamid said he couldn't remember signing such letter.

Supposed it was not, then it could be a bad habit of Hishamuddin to seek media publicity. Both Hishamuddin and Zahid should not have such habit, because Defense Minister and Home Minister should only speak when there are problems.

Hishamuddin's statement does not need to be disputed because it was not what this posting is about. There is the pro and con to what he said. Lengthy ... so just read and comment in our previous posting, "Was the attack on Tun Daim for real?"

In the report on Hishamuddin's remark, he said something as opener to his so-called attempt to come to the defense of Najib. During the premiership of Tun Abdullah, he is not so vocal to defend Najib but not anymore. The word "cousin brother" seemed to be the buzz word these days. The words in red below: 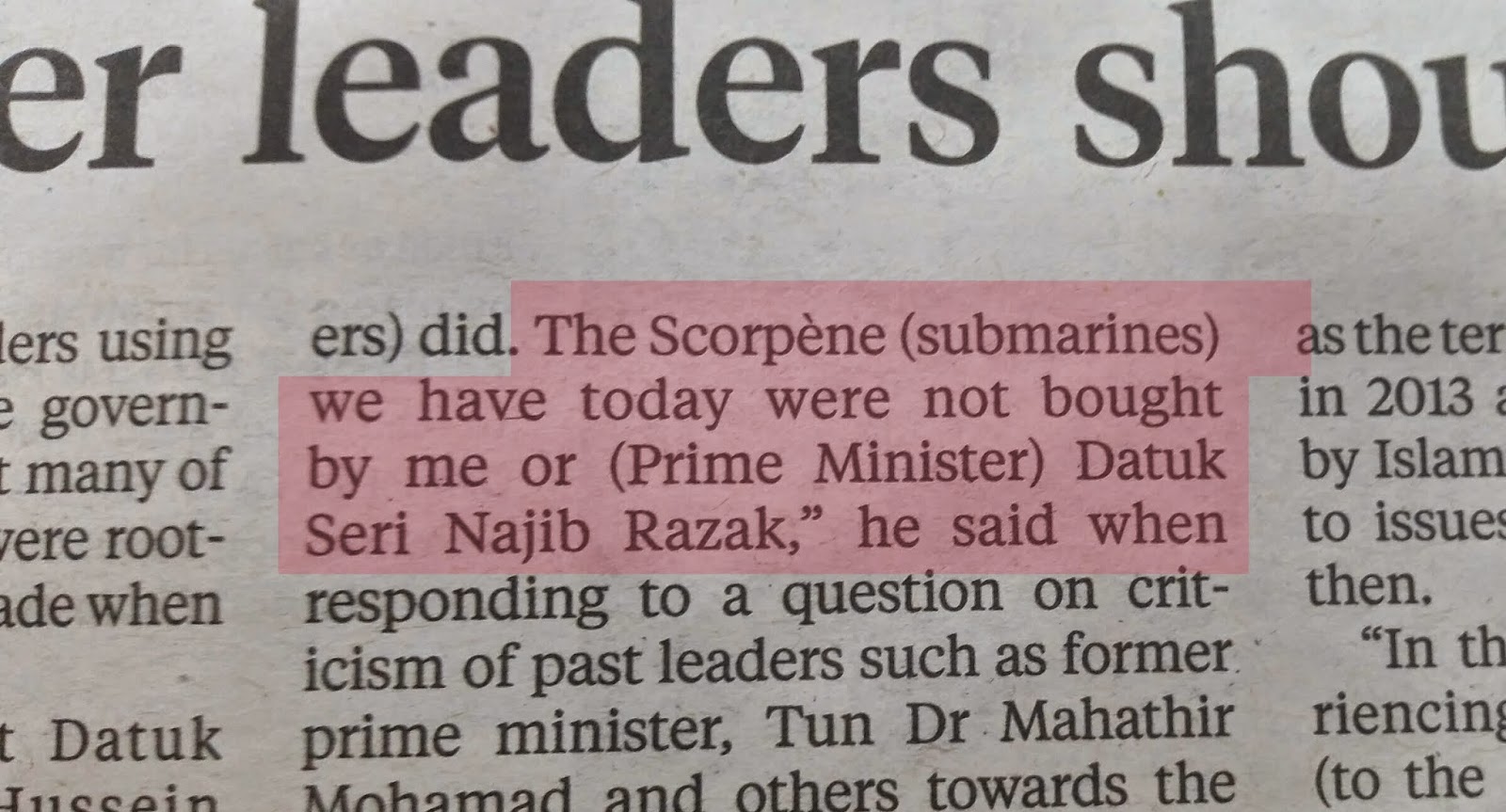 That is a ridiculous statement and bordering on recklessness. It sounded of someone not doing his homework and lacking sensitivity before talking. Hishamuddin made that remark on an RMN base and said as though the purchase of the Scorpene submarines was problematic and a mistake.

Does he know that the previous Navy Chief was the one that requisition for it?

Not only that, the Navy need more than 2 submarines, at least 2 more to meet their requirement. Vietnam has maybe 6, Indonesia maybe 7, and Singapore definitely more than us. Malaysia only 2 but marred with unnecessary controversy, no thanks to Anwar Ibrahim and a group within UMNO.

It is also a good idea to have Maritime Patrol Aircrafts (MPA) to compliment the submarine warfare system. Why not helis too? Navy had long wanted more frigates, multi-role ships, and many others in their grocery list to beef up the security of our long coast line and water.

Thus, it would be an insult to the Navy to insinuate that the purchase of an asset they need, wanted and lobbied for was a mistake of past administration.

If he is telling Tun M to stop finger-pointing on the submarine purchase, when did the elder statesman ever criticised the submarines purchase?

Hishamuddin sounded lost and perhaps, need to get something clear.

The submarine was purchased at a time Tun Mahathir was Prime Minister, Dato Najib was Defense Minister, delivered during the premiership of Tun Abdullah Ahmad Badawi and all along Hishamuddin was in the cabinet.

He had always been part of the collective responsiblity in the decision to purchase the submarines. Thus he cannot claim not to know. 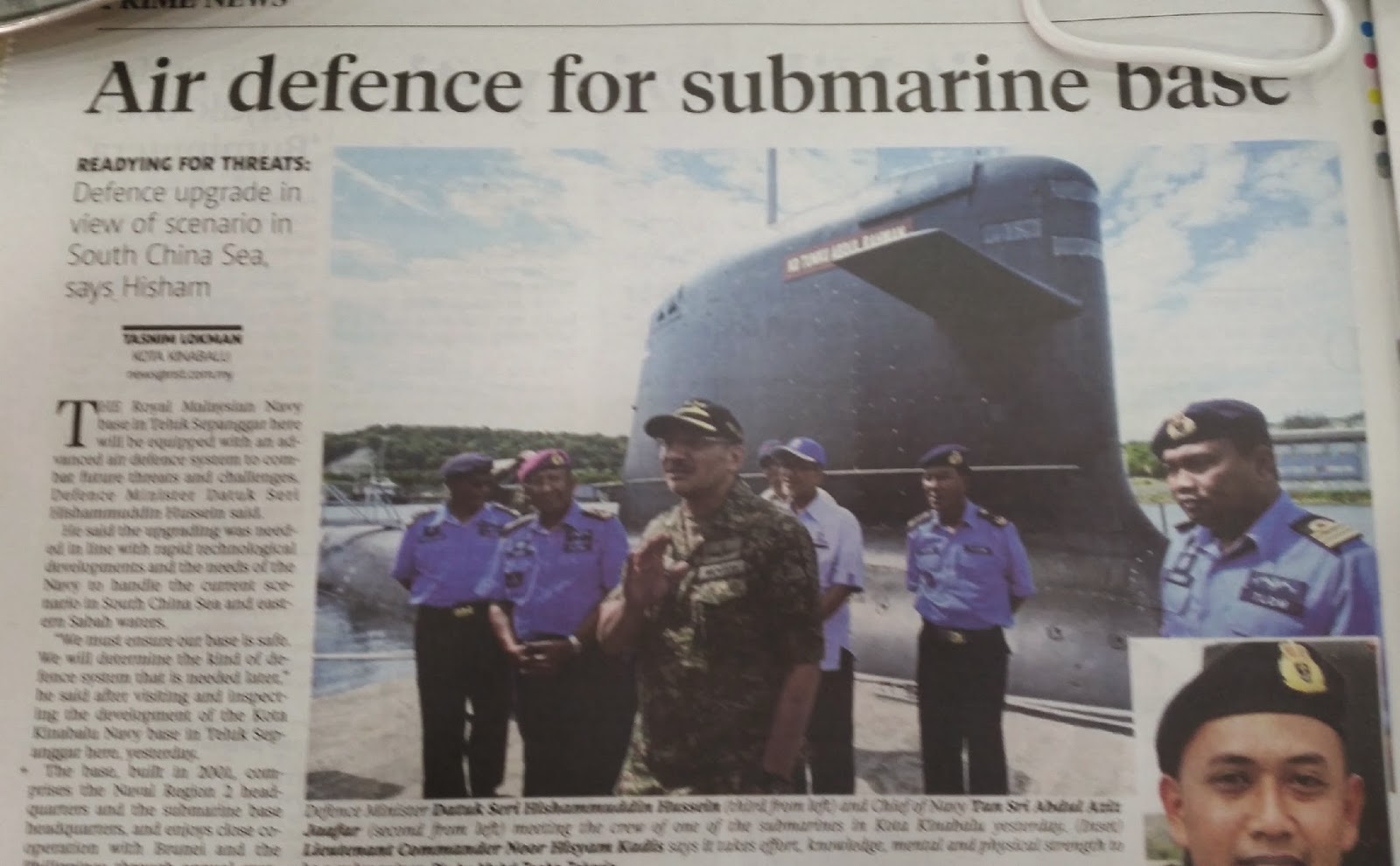 This page gave the first impression that it is about MPA but then it is not. It is air defense for the base. Upon reading further, it is only a suggestion and not a closure or confirmation. There is no online link to the NST news so we quote from Bernama below:

KOTA KINABALU, Jan 25 (Bernama) -- The Royal Malaysian Navy (TLDM) base in Teluk Sepanggar here will be equipped with an advanced air defence system to combat future threats and challenges.

Defence Minister Datuk Seri Hishammuddin Tun Hussein said the move was in line with rapid technological developments and the needs of TLDM to handle the current scenario in South China Sea and eastern Sabah waters.

"In this context, it is aimed at ensuring our base is safe. Whatever the defence system, it will be determined later," he told reporters after visiting and inspecting the development of the Kota Kinabalu TLDM base in Teluk Sepanggar here, today.

He said the plan was one of the efforts to upgrade the base comprehensively against any threats, especially in the waters of the state.

However, he said any upgrade and additional national defence assets would depend on the country's economic capability, political situation and potential threats.

Apart from that, Hishammuddin said the Scorpene submarine refit infrastructure under construction at the base was 12 per cent completed and according to schedule.

He said the infrastructure, encompassing the construction of three main workshops for the maintenance of submarine equipment and storage, was expected to reduce the cost of maintenance of the country's two submarines, KD Tunku Abdul Rahman and KD Tun Razak.

"There will be periodic maintenance to ensure the submarines operate to the maximum duration of 35 years, which will be carried out by the government with the cooperation of Boustead DCNS Naval Corporation Sdn Bhd," he said.

The Kota Kinabalu TLDM base, built in 2001 comprises the Naval Region II headquarters and the submarine base headquarters and enjoys close cooperation with Brunei and the Philippines through annual exercises.

The base also serves a port of call for for several foreign ships from the United States, Australia, Brunei, France, Japan, Singapore and India.

Hishamuddin today concluded his three-day working visit to Sabah to look into the preparedness of security forces especially in the Eastern Sabah Security Zone (ESSZone).


The submarine base does not have an air defense. It is only part of what is called Ground Based Air Defense or GBAD. It is monitored by the Sector Operational Control (SOC) and ships at sea that came complete with Area or Local Area or Point Defense Missile System.

Quite sure, Hishamuddin may have soothed the military establishment with words to express his support and likely to be sincere in looking for ways and means to support them in his closed door brief. Since it is only suggestion, why the need to announced it already?

Why the need to talk about periodic maintenance of the submarine to the press since that is part and parcel of owning a submarine?! The Star even made a report here as though lending a hand in the event there is a need to reignite another submarine not submerging spin.

And, why the heck should he emphasised that the base will be the port of call for foreign ship? What does he have in mind?

Hishamuddin must stop behaving like a media whore. This can be dangerous at times. If it is not necessary, do not say anything. If not sure, do not commit anything.

Defense Minister is not a diplomat that need to meet and regularly be friendly with other Defense Ministers, General and Admirals. Any of your counterparts could turned enemy even in the most remote of situation.

Heaven sake, be a bit suspicious and have some level of paranoia.

In a previous posting here, we hinted of "Lahad Datu, Washington, Yangoon and Katmandu". We accidently left out Bintulu, happen to know about Abu Dhabi, and now tempted to add Sepangar.

One advise to Hishamuddin, who is in an important and strategic position, is "Koho koho ....". When doing his job, he has to put aside his politics and public relation. The defense of the realm is about  country's existence.

Thank god DSSA name is not in your article...

What can I says – what you have says are correct... perhaps we could look to Australia submarines “Collin Class” out of six, sometime only one sub’s are seaworthy. If you compare to Vietnam and Indonesia, they start with 6 sub’s just to ensure some numbers are seaworthy. Beside that our Navy and Air force are lacking number of assets – just imagine we have 18 Su30MkM + 8 F/A18 D = 26 fighter planes and 2 frigates + 4 corvette’s + 6 toothless KD Kedah to cover strait of Malacca, South China Sea and Sulu Sea.

PM has said that we inspire to be a middle power. We cannot be one without the means to influence events in order to further our interest, one of which is through military means.
Simply put, the country is in need of more and quality assets.

"...If the US department of defence can be infiltrated by foreign powers, then you can bet any large company can be – much more easily,” says one cyber security practitioner...

However, what should concern many in the corporate world is not just the growing number of attacks, but also their sophistication – and the extent to which, increasingly, the highly developed cyber techniques used by the best resourced, state-backed cyber attackers are filtering down the spectrum.

“Technology that we previously saw being used against governments or defence contractors is now being used against more regular companies,” says Scott McVicar, managing director of cyber security at BAE Systems Applied Intelligence. “It’s a global issue and the prizes are high.”

I’m JAsIrX and I will share with you some documents downloaded after hacking Britam Defence server.
Its website is located on the Malaysian server. I found bugs in the website with same ip and uploaded web-shell through this site.
Then I hacked plesk parallels control panel and gained access to Britam Defence mail accounts and website directory.

The documents come in 6 parts and total over 423MB compress zip files and inside the compress files appears to be a common layout of three main folders named !!Syria, Iran and Iraq..."