Economic sabotaguers rising up to the occasion PM got much brickbat from that statement recently.

Yes, there are challenges due to falling oil prices but this is currently a BUDGET CHALLENGE and not a ECONOMIC CRISIS.

A BUDGET CHALLENGE is when govt made a budget forecasting certain revenues to cover certain expenses for the year but suddenly circumstances have changed that causes forecasted revenues to drop (such as oil & gas revenues to govt). 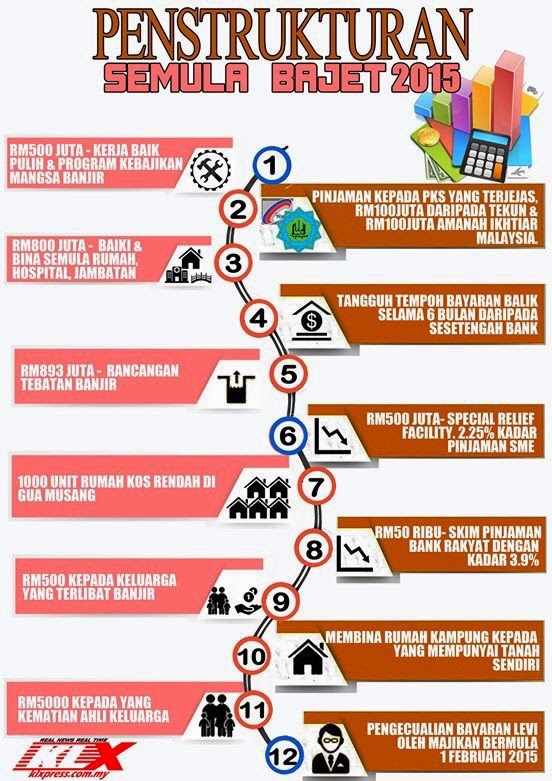 This is a BUDGET issue and can be solved by govt by juggling around - either by cutting certain expenses or increasing certain revenues (such as increased dividends from GLCs such as Khazanah, TNB, TM etc) or by re-timing large Capital expenditures. (this is what PM Najib is doing today with the revised budget to be released)

An ECONOMIC CRISIS is when our Malaysia's economic conditions have severely weakened due to worsening consumer confidence, or high interest rates or very weak demand from our export markets that causes local and foreign demand to fall.

This is simply not the case at the moment as NOT AS SINGLE ANALYST have forecasted Malaysia having less than 4% GDP growth in 2015.

Most analysts including the world bank are forecasting growth of between 4.7% to 5.5%.

This is because low oil prices help increase demand and growth in our export markets, weaker Ringgit is a boost to our exports and our local consumer demand remains intact.

Even 4% GDP growth is very good for a country like Malaysia,

Therefore, MALAYSIA IS NOT FACING AN ECONOMIC CRISIS. 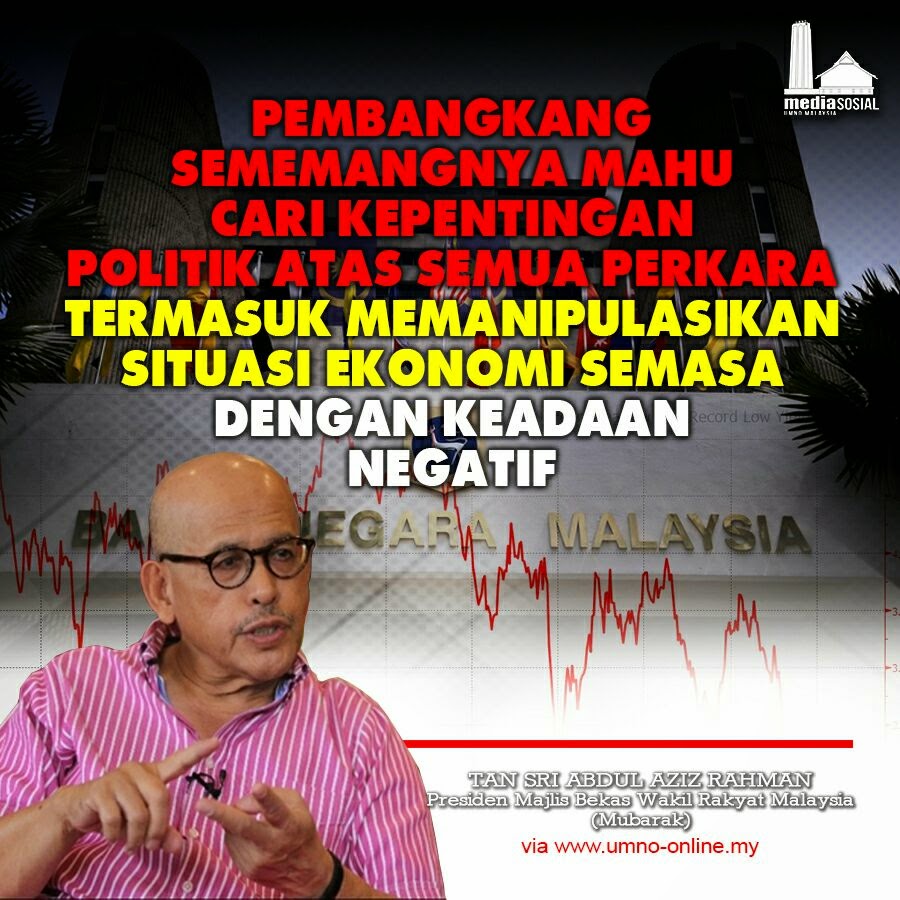 WARNING: Pakatan leaders are trying to UNDERMINE consumer confidence in Malaysia by continually spreading propaganda that Malaysia is experiencing economic crisis. And if they are successful, it will destroy Malaysia's local demand and local Investment and slow our growth. 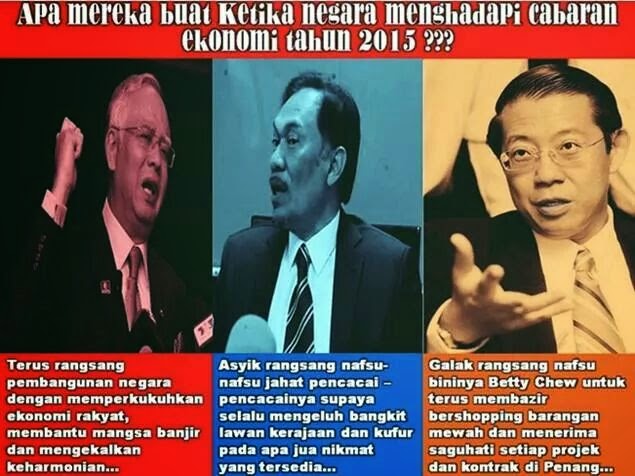 These irresponsible people must stop doing this as it amounts to economic sabotage and is considered treason.

That was from our WHats App group. And this morning this came in. 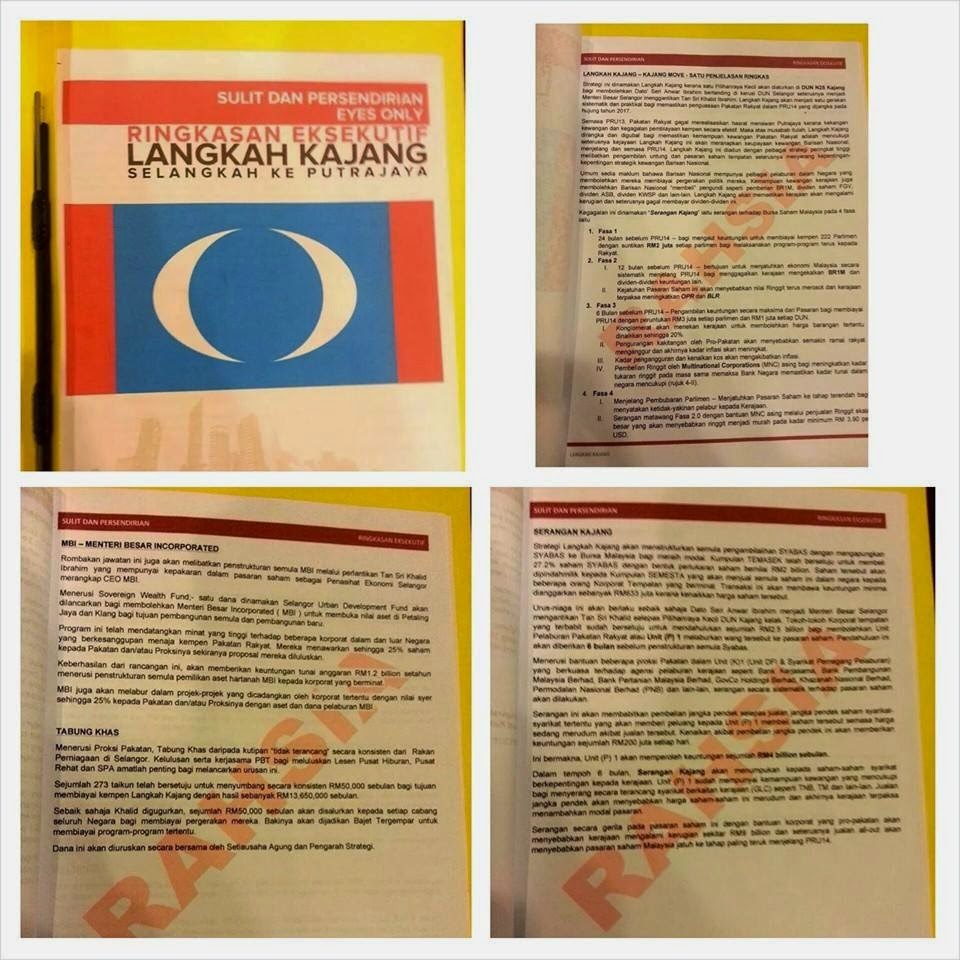 Rogue traders are back with a vengeance to profit from the weakening ringgit against the US dollar with one taking a short sell position against the Malaysia ringgit amounting to USD1.2 billion (RM4.32 billion).

This particular player, a former banker, has a huge appetite for more and is said to be working with a few hedge funds to up the stake. The player will be revealed our next series.

The ex-banker started in September 2014 and in a short four months he has bet at least USD1.2 billion for the ringgit to fall. He is replaying what he did in 1997 when the greed of a few unpatriotic and disgraceful speculators caused them to have no qualms about making millions, if not billions, at the expense of the country. They made a lot of money short selling currencies they believed would fall, thus worsening the situation.

Forex traders watchers believe he is following the playbook of another prominent ex-banker who lost his finance empire after being exposed as among rogues who betrayed the country. He too lost his innovative banking group and left Malaysia for Canada, only to return later.

It tallies with a document called Dokumen Kajang that went viral some months ago. It was believes to be a blueprint prepared by Rafizi for PKR to do an economic sabotage. Whether it is true or not, Rafizi have denied. And, it need to ascertain whether Rafizi is telling the truth or not.

But, that banker is not so difficult to guess. Another posting revealed the ex-banker who is more a stockbroker than banker:

An owner of a prominent news media empire is casting undue influence on the financial and political state of Malaysia for his own personal monetary gain.

Sources within Bank Negara Malaysia (BNM) revealed that Tong Kooi Ong, the owner of the Edge Group and The Malaysian Insider has taken a USD1.4 billion short position on the Ringgit through a proxy. The first transaction took place in August 2014 and subsequent short positions have been taken leading up to January 2015.

Tong Kooi Ong is no stranger to investments, notably during the last financial crisis, Tong took a similar short position with Rashid Hussein which resulted in a significant gain.

He is a former stockbroker, financial analyst and banker who founded and built Phileo Allied Berhad, one of the most successful and innovative financial banking groups in Malaysia in the 1990s. Phileo Allied Bank was subsequently taken over and merged with Maybank in 2000.

According to the source, Bank Negara Malaysia and the securities commission are monitoring Tong closely. 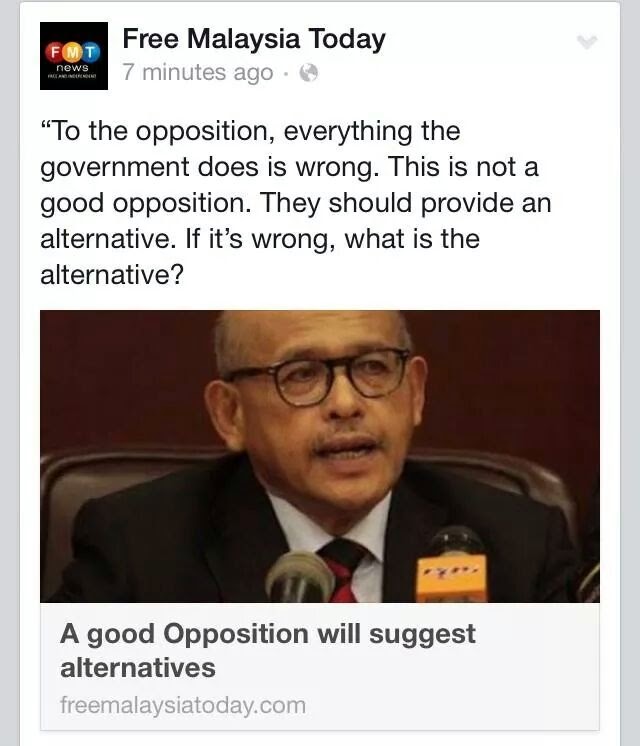 It happened during the flood disaster and this sabotage cannot be discounted in view of the existence of such documents, true or fake.

If true, ponder as to whether that is responsible politics and are these politicians the one the people can lay their fate with?
at 1/29/2015 02:10:00 PM

When people predict 1MDB will be in trouble, they were blamed of economic sabotage.

When people warned about our increasing debt ratios, they were called economic saboteurs.

Now those warning about economic crisis ahead & the risk to our ringgit from the falling oil price are accused of economic sabotage.

OH MY.WHEN WILL THIS UMNO BARU MEMBERS REALISE THAT A DOG IS A DOG IN WHAT EVER NAME.THEY BARK N BARK N BARK UNTIL...WELL U KNOW WHAT I MEAN.

You cant compare singapore's growth with malaysia's. Thats just bad and misleading. A 2 percent for a country as singapore is pretty good compared to a 4.x percent growth for a developing state like Malaysia. Might look a mere 2.x percent but you gotta take real figures as that 2 percent might be bigger than the 4.x percent. In a state such as singapore with no timber, palm oil, cocoa, petrol, land and you name em, its a pity that malaysia is only able to grow a mere halve of singapore. Crisis or not is subjective. The way we are heading, dont be too surprised if more jump on the bandwagon. My take is we are not yet at crisis level as that would happen when oil dips below 40

anon 6.45pm
i am no economic genius or math wizard, but.. that is why we use performance comparison using percentage.

When the Government puts a stop to extremist comments on both sides of the fence fairly, then people will feel more at ease. Taking action against the opposition members and their supporters for 'sedition' but allowing groups like ISMA, PERKASA etc to bark uncontrollably is not good for public perception and confidence. During Tun M's time he took appropriate action against any party viewed as extreme. Current Government should do that.

Malaysians MUST remember the DAP agenda of Malaysian Malaysia (read that as Chinese govenment of resource-rich Tanah Melayu).

This agenda will never die off, as long as DAP is taking tips from PAP.

Monitoring of DAP visits to red dot is critical to pre-empt any sabotage.

a smart leader can read what is going to happen before it happen, a dumb one will always find reason to procrastinate.