Military man do not disobey order 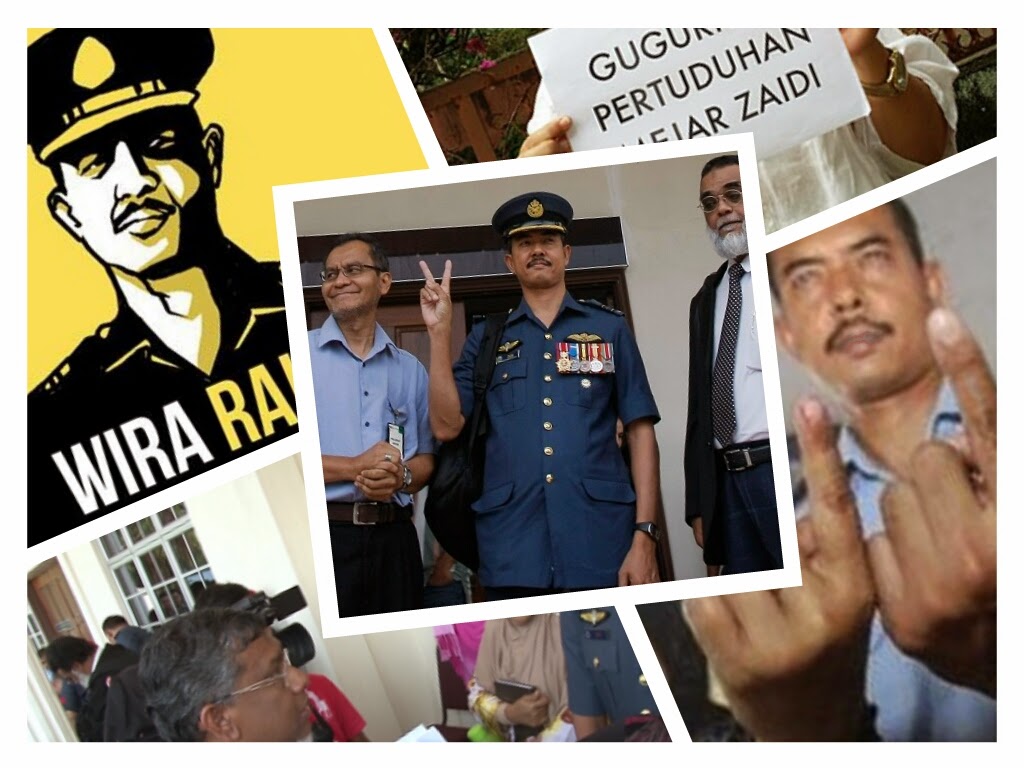 There is a quote from the great WWII General George Patton Sr. It says:

In the military, one take order or give order and there is no other way. Every order or procedure should be adhered to. No question ask.

Military expect discipline on all under command. There is no room to loosen on discipline. Discipline is everything and the chain of command have no leeway for dissent. Not even saying what is right. That is democrasy in public life.

The military is to defend and preserve our democrasy, but it does not operate on democratic principle. Or, it will put the military organisation in disarray.

PAS supporting former Major Zaidi Ahmad was dismissed by the millitary court. Although what he said maybe politically relevant in civilian life, he had breached military order.

Thus, attempt by Bersih 2.0 to politicise his dismissal by the military court is irresponsible.

In the bigger millitary perspective, it could jeopardise our national security. Blogger Captain Seademon explained in his latest posting here.

He reminded of two important quotes in the military - "Loose Talk Could Sink This Ship” and “The Walls Have Ears”. In the 1970s, at the height of the Second Emergency, soldiers got killed after wives talked eagerly in public about the husbands going for operations against communist terrorists.

In one case, a wife employed as a typist at one military establishment was found to have mailed carbon papers of each important military correspondence to the intelligence service of a neighbouring country till she was arrested.

In the late 1980s, 10 officers and men of the Armed Forces were nabbed by military intelligence for selling strategic defence files to the intelligence agencies of a neighbouring country. A sum of USD96,000 was paid for a document on contingency defence plans of a particular state. 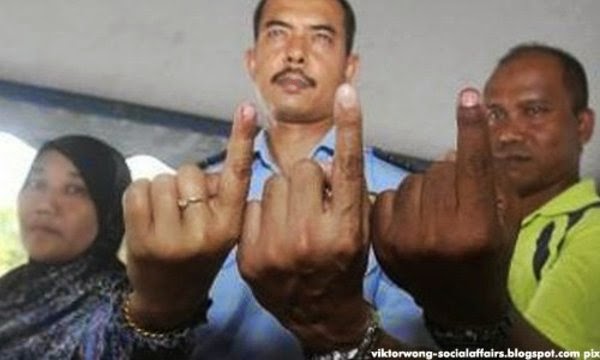 Captain Seademon said there are proper channel to air one's grouses in the military.

An Armed Forces member is not a civilian. It means that you "come from a highly disciplined institution that lives by its codes of rules, regulations, standing orders and orders."

Captain Seademon acknowledged Zaidi as a good officer, until the day he appeared in the photo above. He was his junior by two intakes; a good pilot; a quiet man; "well-mannered, and according to those who know him, it was no secret that he is a staunch supporter of PAS".

In the military, there is no room for preference to any political party. They are free to vote, but "they should remain apolitical in their conduct".

An order is an order

While Zaidi had good intention to comment on the indelible ink, Captain Seademon explained he went against the Armed Forces Council’s Order No. 13 of 1960."

"As a member of the Armed Forces, you are not to talk to the media unless you have prior clearance from the Public Relations Office at both the Air Force HQ and the Ministry of Defence. You might be subjected to unguided and mischievous questions and you might answer wrongly. You might give away more than you should, as the information you are privy to may cause harm to the defence of the nation if leaked whether intentionally or unintentionally." 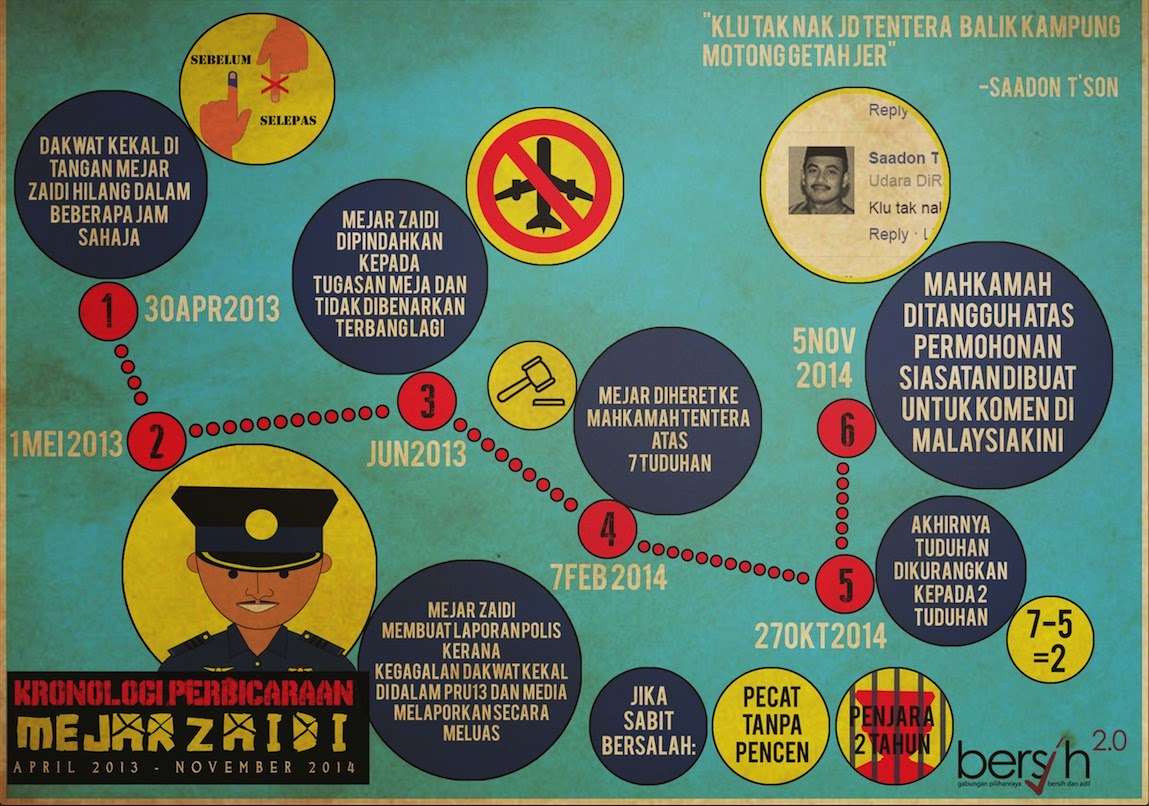 However, perhaps for political reasons, Zaidi decided to show the signal to journalists who do not have the necessary security clearance to be privy to the information on the signal.

A transfer order could hardly detrimental to national security of the nation, but the act of showing any document to those unauthorised to view it has serious implication. He posed to question what else could a defiant commanding Officer of a fighter squadron, could and would reveal to unauthorised people. Is the risk similar to the two cases mentioned earlier?

To Captain Seademon, it "shows how this senior officer’s conduct was very unbecoming, and is not trustworthy to be looking after the nation’s defence. Zaidi even sent out an SMS in the form of a political incitement; definitely unbecoming of a senior officer of the Armed Forces."

Was the punishment of being discharged from His Majesty’s service received by Zaidi harsh?


Every person subject to service law under this Act who, whether wilfully or through neglect, disobeys any lawful command of his superior officer/standing orders shall, on conviction by court-martial, be liable to imprisonment or any less punishment provided by this Act.

In the case of Zaidi’s, the gravity of his offences and his rank and position make only the first four punishments applicable to him.

Since death punishment is out of the question, the members of the Court-Martial chose the least: dismissal from His Majesty’s service, meaning that he is still entitled to his benefits. It is not harsh and fairly lenient.

Zaidi's "political beliefs led him to do what every officer and man of His Majesty’s Armed Forces should not do: disobey orders and putting the uniform you wear to shame." 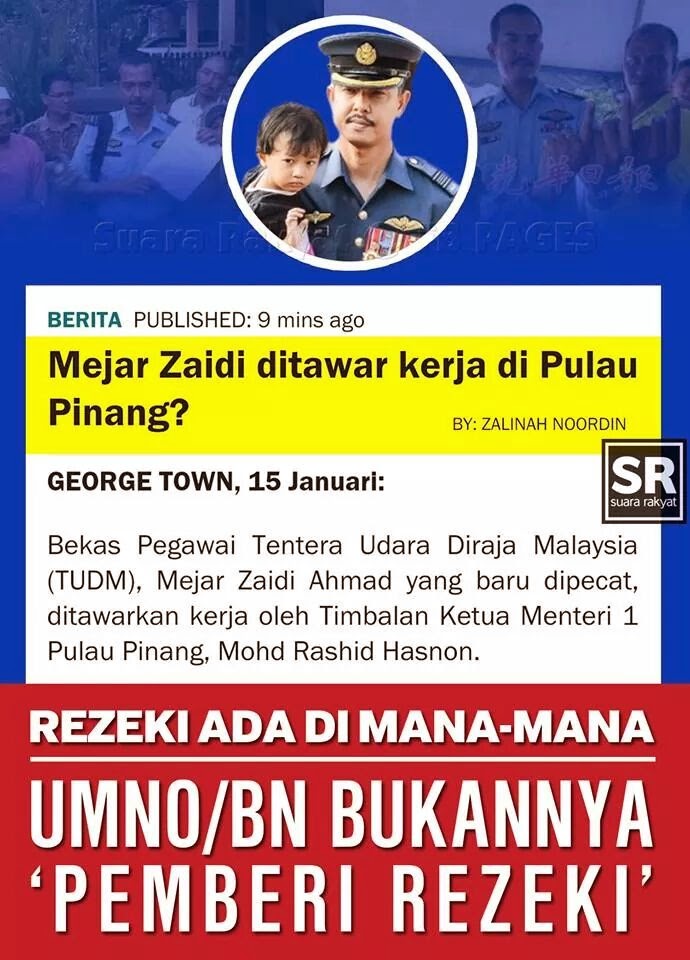 Zaidi will soon be a political celebrity, or as Captain Seademon described a donkey in politics. He will be part of a circus act and may earn something from the collection made from the spectators of the nightly circus shows he will be performing in, all in the misguided name of justice.

After the next general elections is over, he should find himself a steady job because once used, any politician would just move on and he will be left like a discarded tissue.
at 1/16/2015 08:39:00 PM

They would never learned. Same mistake over and over.

So, all in uniformed services or Govt. should not be playing politics.

That's the way it should be if one is a Govt. Servant.

So, when are the rest in Govt. Services whether PDRM, schools etc going to be punished like him?

If need a fast track promotion, the best way is to praise the ruling Govt, not criticize. Can go to the press anytime and all will be praised.

He obviously does not live in a real world.

What a waste of taxpayers money to train jet fighter pilot and become a political donkey.

I am reminded of General Hashim "Jack Palance" Lt Gen Ghaffir and Dato Hadi (cannot use the rank Brig Gen.) All have issues with the Armed Forces, embraced by PR and stood for election at the last GE13; and lost miserably. Now they are nobodies, just makan pencen buta - except for Hadi I think. They are even shy to associate with former colleagues or course mates. Not sure whether they are still members of PR. This Zaidi fellow will have the same fate.

One get punish when you break rule.

Like all the former actors/singers in mainstream media who turned to PAS stage for ceramah.

They are now left in the lurch.

Anon 10.38,
What rubbish you are talking about.Prove to us which Political party do the Armed Forces belongs.You know that your comments are so stupid that you agreed it is the right of Admin not to post it.What cheating you are talking about and why until now the Oppo or BERSIH for that matter did not sue SPR or govt on this ink matter.Too much KETUM watrer in your head....

not only in military even a civilian -- like Edward Snowden -- will not be ALLOWED to reveal any secrecy to the whole world.

OK! That's the same principle the Nazis stuck to when murdering Jews.

And that's the same orders your favorite whipping boys adhered to when they waterboarded your "kekawan seagama".

So do you Nazi nationalist ketuanan scum really want to use "orders" as an excuse? Because I'd love to hear pigs like yourselves squeal when subject to "orders" that those who deliver upon you are obligated to "obey"

When your time comes, it will be interesting to see who speaks out for you Nazi scum.

You are missing the point completely because of your anti government and racist beliefs.

You are an idiot! U can object by resigning. Not go to the media. If i ever receive orders to off a racist pig like you，i would happily oblige...

Indelible ink is a stone age tool to ensure no voter votes twice or more. We already have IC, biometric etc for better way to do it. Anyway this case is not about political parties or even the indelible ink!, its about an officer not following orders. All petitions on indelible ink during the election are not accepted.

Watcher 2
So much venom
So much vile
So much hatred
How did you survive all this while with so much putrid abd negative feelings.
It must be killing you slowly. Let it go man. Get a life.