On rotan and Datum, everyone missed the plotsss... 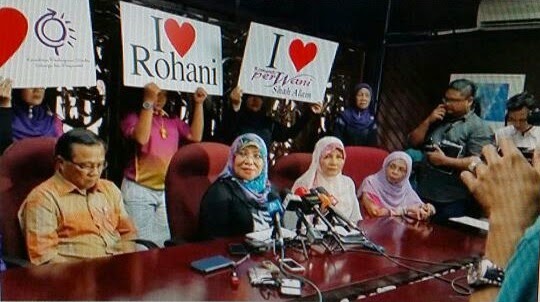 Was reading the paper and social media all morning.

It may have a happy or unhappy ending, but something noticeable was how easy issues can get loss in translation by the wrong statement or misleading reporting.

The blame can be leveled on the person making the statement or the communication support but at the end of the day, the public are also too gullible to miss the real message and easily diverted by headlines and discussion.

The above picture is a classsic. The Minister, her supporter, communication unit and public missed the whole point of the issue. In this one, it has a happy ending. 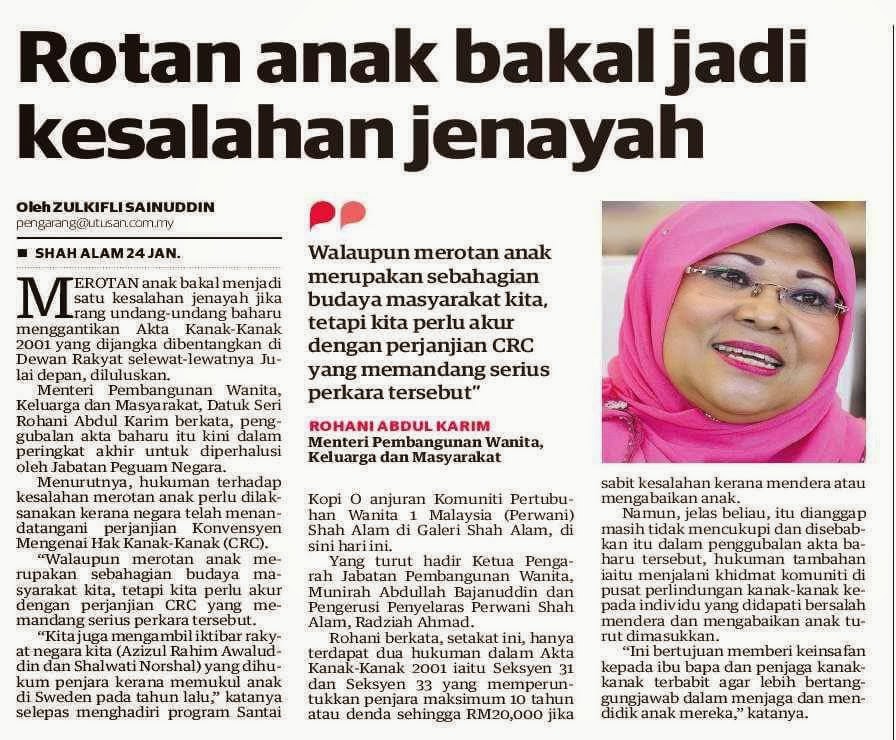 Sarawakian PBB Minister for the Ministry for Women, Family and Social Development (MWFSD), Datuk Seri Rohani Abbdul Karim made a statement on canning on children.

That headline and the highlight to conform to the CRC got the public wild. 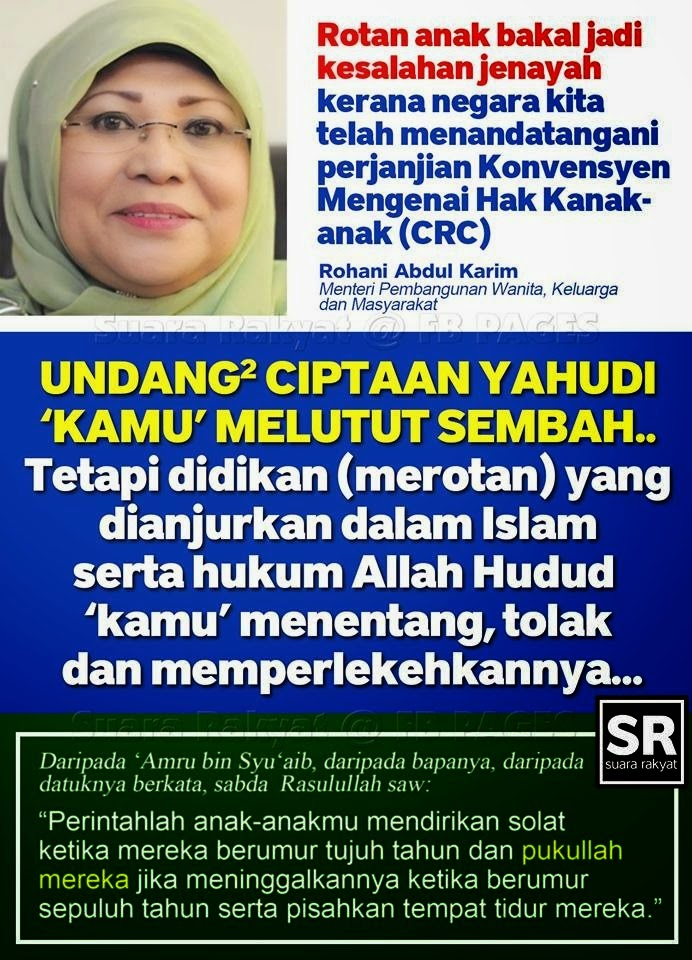 Modern parents tend to refrain from capital punishment and apply more psychology in disciplining their children but that statement has bigger implication.

It is not only about the traditional "spare the rod spoil a child" mantra but also it is something part and parcel of raising children to be practising Muslims. More frightening to the Muslims about CRC is below: 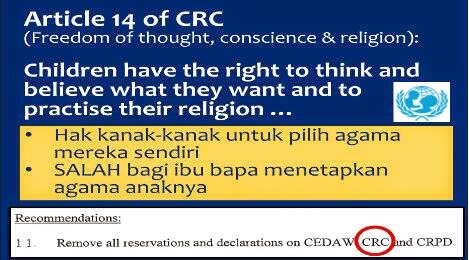 Shahrizat clarified that CRC is not so rigid as to ignore local tradition. She is a modern parent but is quite aware of the local and religous sentiment to the issue. It is only fair on her to express the view of Wanita UMNO.

Pity those parents like our mother whose got to handle 7 rambunctious boys. Yes, our family was like the family in the old musical "Seven brides for seven brothers."

But, NST made it a headline looking like this: 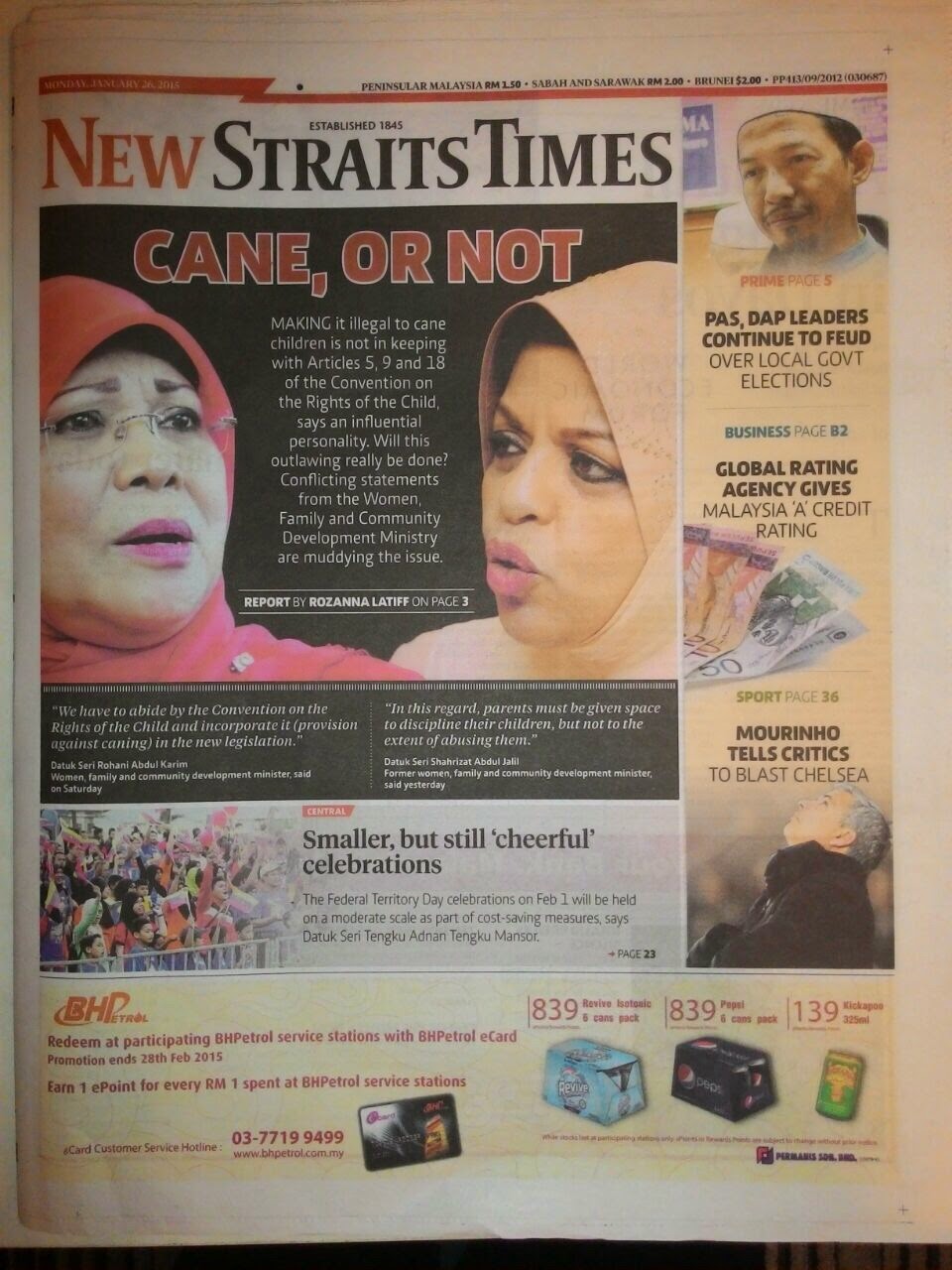 As if we have not got our hands full with Hishamuddin and Zahid rivalry, Tun Mahathir and Tun Daim issues with Dato Najib, and now this. That send out a message as though the current Minister is at logger head with past Minister below: 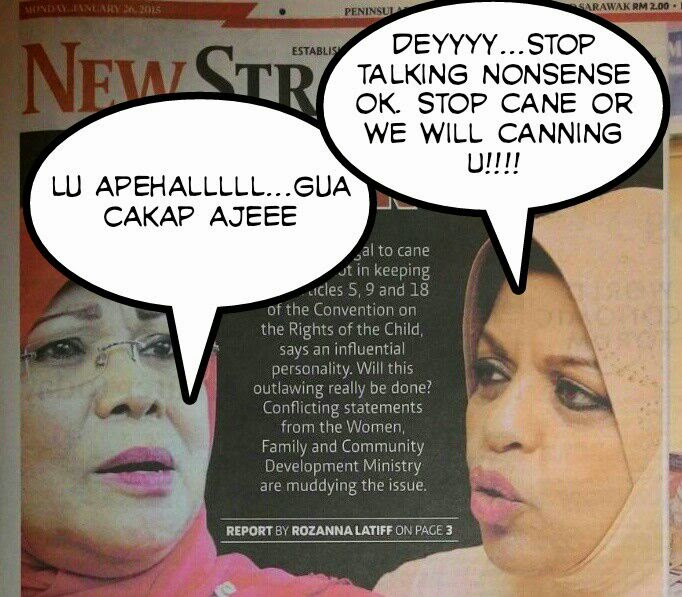 Thank you NST, yesterday Hishamuddin and today it is Rohani. See the picture below: 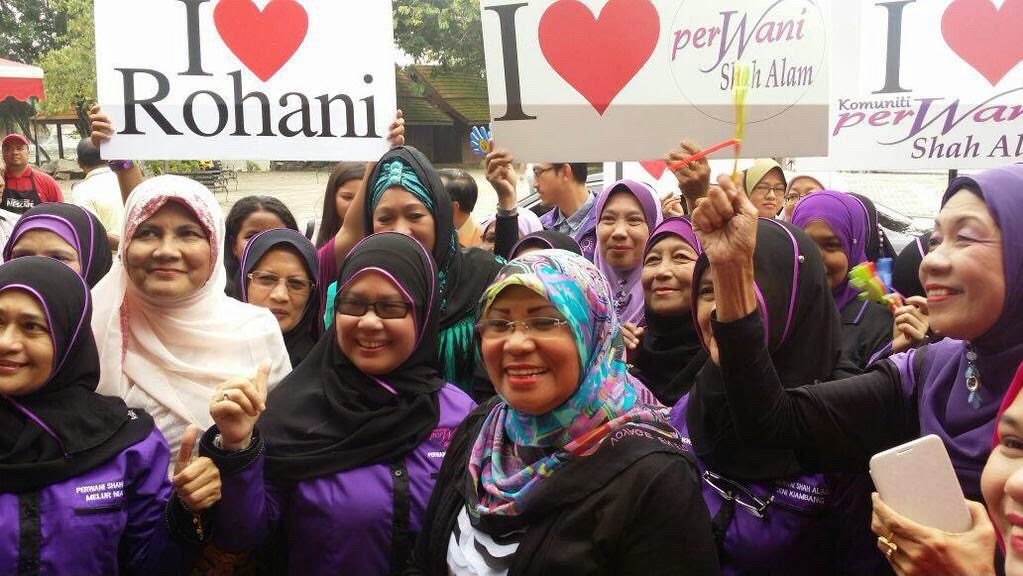 Hopefully it does not turn into a rivalry between Wanita PBB versus Wanita UMNO. Not with Sarawak state election coming up in a year or slightly more.

In a press statement from the Ministry's communication unit explained that it is only meant for juvenile punishment. Or is it?

However, something good coming out of it is that the public is now talking about caning in raising children. Old school or modern psychological ways, hope the issue carry over to the subject of parenting and child abuse.

Since the Mrs have been doing industrial relation type of admin work, she has changed her stance on modern approach. She has been complaining of rising indiscipline and couldn't care less atttude of Gen Y that she is beginning to blame parents for not spanking these Gen Y. 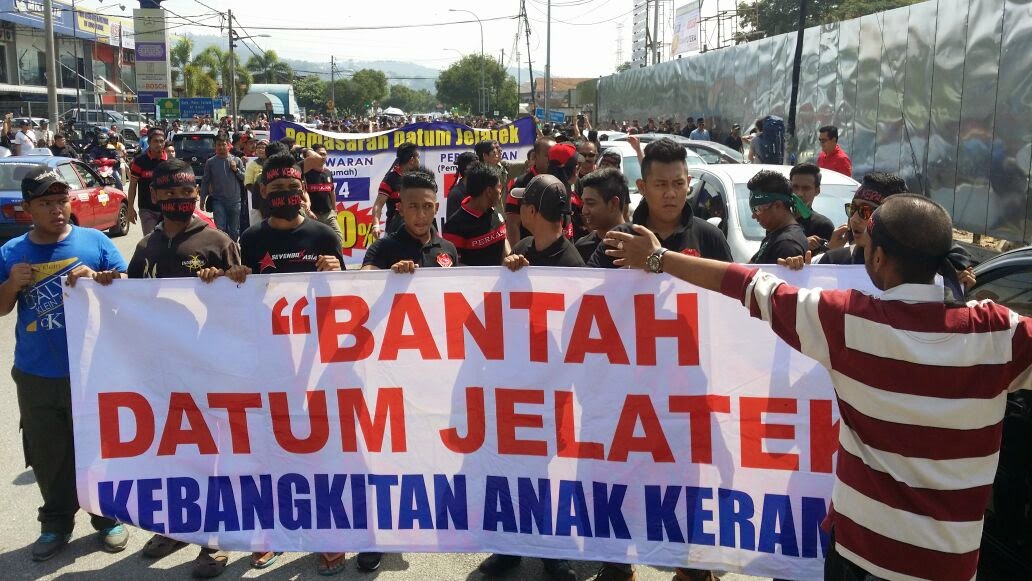 Last Sunday, there was a major demonstration along Jalan Enggang, Kg Dato Keramat, Kuala Lumpur against the development of Datum Jelatek. Without much hoo haa, it just happen and turned out to be a truly spirited one.


And, the one below:


In every sense of the words, it is was rowdy and aggressive demonstration. Read The Star reports here and here.

Some thought it is orchestrated by UMNO. Perkasa can be seen and some say the Ketua Bahagian for UMNO Gombak was there. Some leverage can be given to Perkasa but UMNO Gombak not to sure. They could be Azmin's proxy, as the rumours percolating in UMNO FT.

However, the video can be heard the chant, "Hancur! Hancur! Hancur Datum!" In case, peace lovng readers out there not know. That is a PKR and PAS chant. The demonstration was not partisan but led by the infamous Budak Keramat, particapated mostly by Budak Keramat and they could be UMNO, PAS or even PKR, surely it is about Keramat.

One of the first person to raise the issue of the Datum development is Anwarista and PAS state assemblyman YB Saari Sungip. Even the suggestion to claim it is about PAS and PKR doing the demo and later blame on UMNO also does not jive. Again, it is Budak Keramat leading and participating the show!

The mood is about defending the last bastion of Malay settlement in Kuala Lumpur. It may sound racial but the same would happen with Chinese.

If Federal government tookover lands in Kepong and Seputeh to do low cost development for Bumiputera, cut all my 10 fingers that Chinese would not do the same. DAP Penang government could fall should they takeover and redevelop Chew Jetty in Georgetown.

There are hundred if not thousands of similar protests to highlight the point. Though it is looks racial, but it is natural. So let us not be hypocrits.

Whenever anyone talks about business and economic interest, it does not sound racial but it is tip toeing along generally Chinese business interest. Then there is this work by Dr Ahmad Khalid: 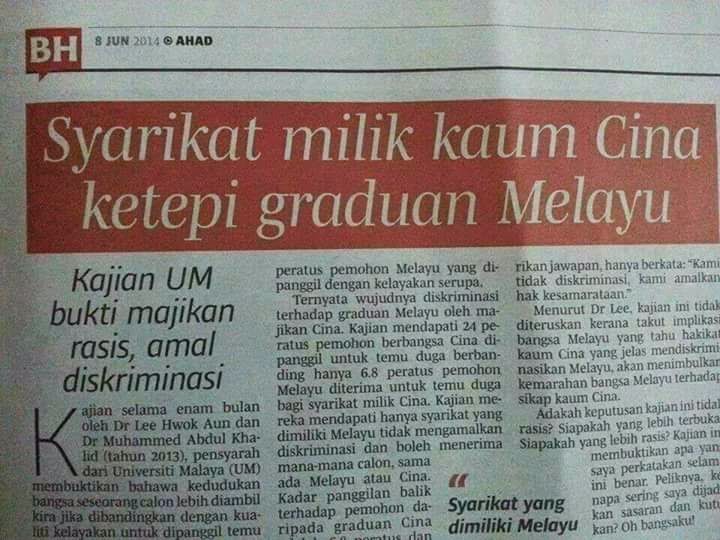 Datum Jelatek is not about race alone but corruption! So big taukeh MCA pretend to be colour blind: 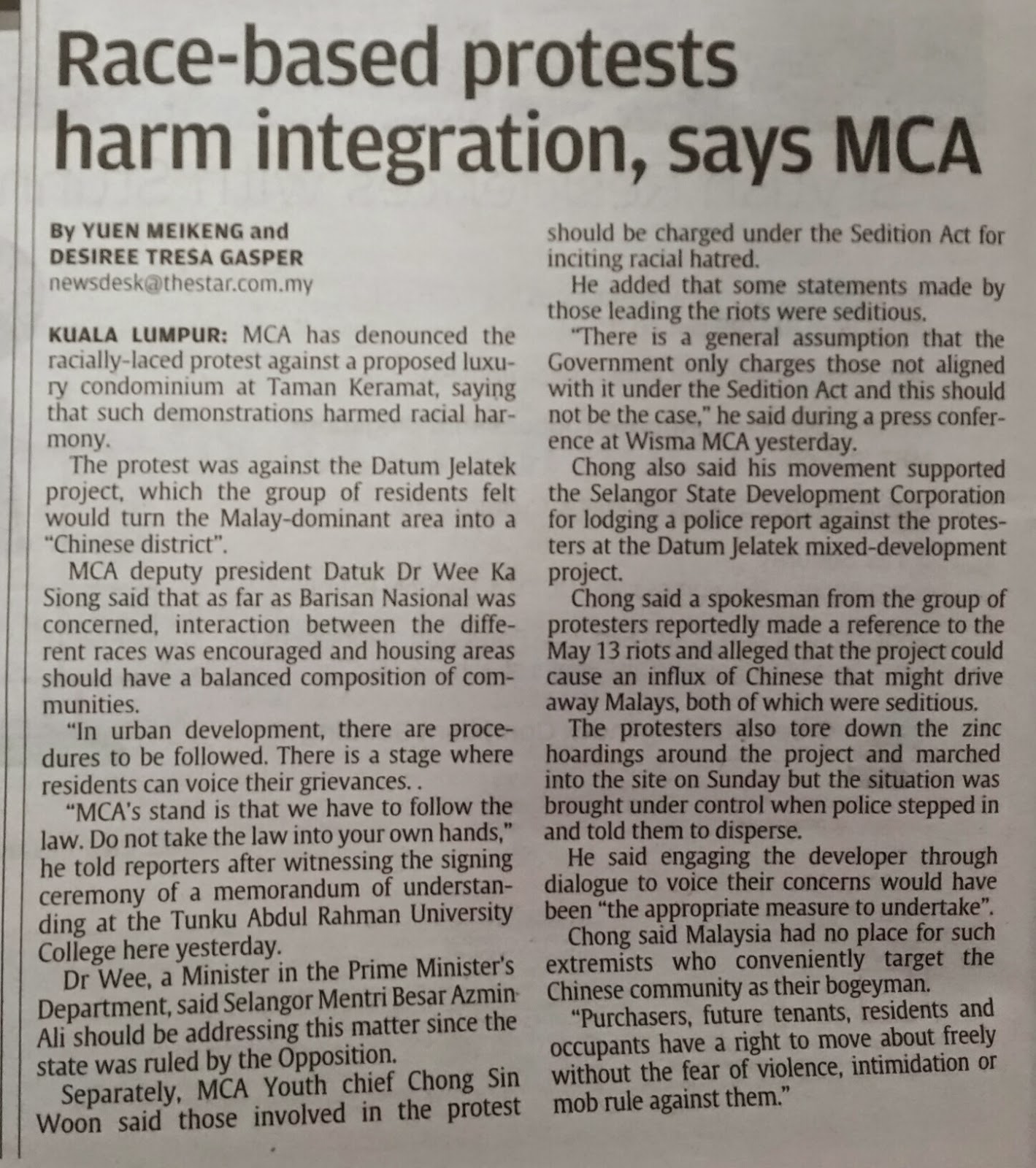 And, PKNS trying to justify it: 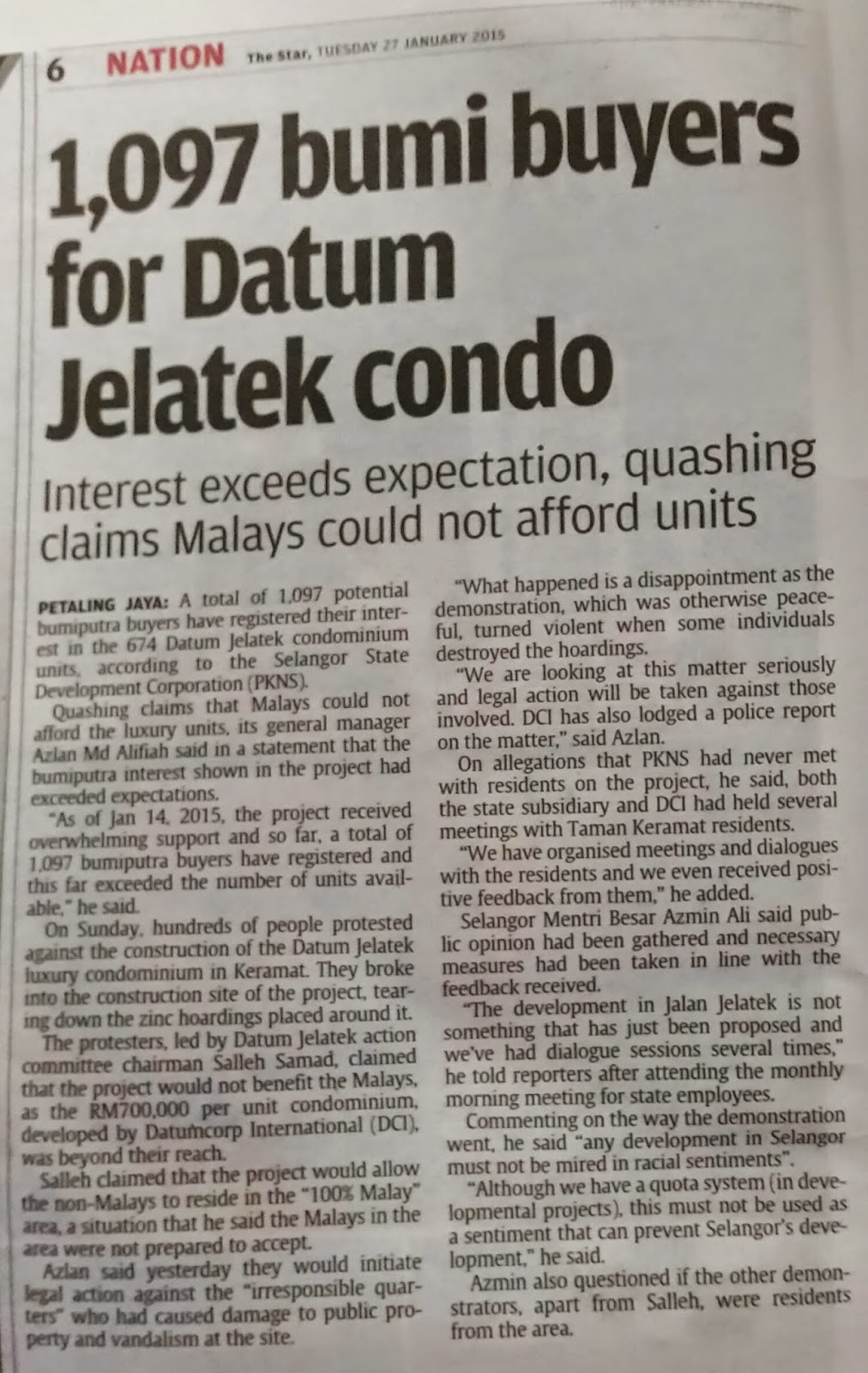 Expressing interest and eventually buying is two different matter. The local leading this protest, Salleh bin Samad or now so synonymus with the protest that he is now called Salleh Datum, stumbled into the issues when he was enquiring to buy.

He is no spring chicken on property development. The man has been there and done it . He knows the business and the game too. And he has done thorough homework on this.

Previous GM, Dato Osman Omar (OO) could only resort to character assisination to debunk Salleh. What OO is doing, whether he knows it or not, he is covering up for current MB Azmin Ali but it seemed as covering up for past MB, Tan Sri Khalid Ibrahim.

Everyone in Keramat knows that there had been hanky panky going on. Azmin manipulated the project into a political campaign against Dato Dr Khir Toyo but lay off after winning.

Initially, PKR-led PKNS had intention was to sell one block off to a China Company and international buyers. Eyes was on then senior exco, Teresa Kok as the widely broker and commission taker for any China deal in Selangor. That is why she is no more exco. 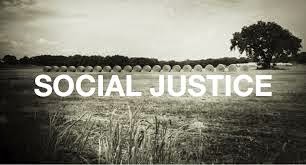 In the recent development, the local believed that PKNS wanted to hoodwinked the locals into believing that it will be a 100% Bumiputera development. The locals wanted rumah mampu milik development like the surrounding.

But they know, PKNS is already stuck with a high cost land acquisition and premium so will go according to plan. Their plan has to be a mampu tengok development.

They claim Malays could afford. Sure .... PKNS will priced it at RM700,000 and when locals can't buy, PKNS will open it to all. People are not stupid. If they are, there is social media to help enlighten them.

Put aside the racial overtone.

Is it not social justice for Keramat locals to demand for homes on the land of their forefather for their off springs?

Haven't you heard?
Asking for social justice for Malays is racissssssst, also extremisssssssst

thanks. im also glad tht malay are getting more vocal protecting their rights. it cannot be just one sided game now.

those racist has been harping on us for so long. its time to react.

So why sell the land in the first place?

Those who sold thee land, aren't they traitors to their generations and people of Datuk Kramat?

I think you are the one who missed the plot.

Ask yourself the hard question why the Malays in Malaysia have "been left behind", even after receiving so many privileges?

Whose fault is that, eh?

You have another explanatory theory to offer?

If that is her next campaign slogan, she could suffer like Najib. Ish ... stupid

How about working and studying hard, not dropping out of school, studying the "hard subjects" like science, maths, IT and English, being entrepreneurial, refusing to blame others for any predicaments you find yourself in......see the picture?

Why are the Malay-Muslims in Singapore doing so much better than their counterparts in Malaysia?

I'm more inclined to agree with OutSyedTheBox regarding the Datum Jelatek where he sees it more of a class war than a racial war.

Expect more of this outburst & vigilantism to happen when inequality widens & the people are powerless to defend their rights.

So sure ke malay singapore doing much better..you sounded like a red bean pussy la..