In the midst of crisis, there's always instigators 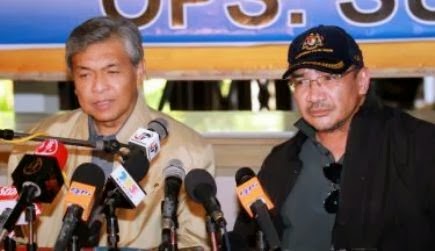 One reason there is no sense of honour and gentlemenly conduct in Malaysian politics is that political competitors, be they inside or outside a political party, could seized on opportunity from a troubled situation. That happened during the flood disaster and it happened to Dato Dr Zahid Hamidi.

Instead of getting team support from his fellow cabinet member and/or UMNO party leaders, a reliable source claimed a group of instigators approach those close to Dato Hishamuddin Tun Hussein Onn to launch an attack on Zahid. The instigators gathered up MPs and Division leaders from a certain state to meet Hishamuddin and a suggestion to hit out at Zahid cropped up.

Unfortunately, several attendees claimed the same set of instigators organised a similar gathering with Zahid to start a retaliation. Sounds like Lord Rothchild funding and selling arms to both sides in the Battle of Waterloo while also making money in the London stock market.

In case anyone not know, it was similar type of instigators that caused the rift between Dato Seri Anwar Ibrahim and Tan Sri Khalid Ibrahim, which resulted in a long drawn leadership crisis in Selangor.

Not all in the corridor of power agree to the idea of toppling Zahid to clear the path for Hishamuddin ascension in the UMNO hierarchy as hier apparent to Dato Najib Tun Abdul Razak.

They felt the political situation is too edgy for any internal squabble.

As the #1 VP, Zahid has far wider support than Hishamuddin. One UMNO source believed he has the support of more than 60% of UMNO Divisions. While, Hishamuddin almost lost out to Dato Mukhriz if not for the solid Johor and royally assisted Pahang votes.

In this new era of openness, any attempt to create dynasties will be seen as distasteful to UMNO members and general public. Class domination or class struggle should have no more place in Malaysia. Tun Mahathir voiced this [read here] in which Dr Puad Zarkashi may have been dispatched to deny.

The leadership and succession plan of UMNO should be decided by members in order to preserve members' support for leadership.

Toppling or pre-planning a line-up could erupt into another UMNO civil war which in the past, off shoot into more opposition parties. Bear in mind that orchestration by power brokers in the past have repeatedly failed.

If Hishamuddin is meant to be, then he must earned it and not rise on the strength of his blue blood or by dirty trick on others. However, if it is meant to be Zahid, then accept that, including his reformasi past.

Zahid was in a hot soup arising from the letter for Paul Phua. The letter was written to the FBI at the request of lawyer Tan Sri Shafee Abdullah to clarify a matter for his client.

It was leaked by a Johorean-owned Hong Kong newspaper, South China Morning Post. There is much talk and sources have given many versions on the background of Paul Phua.

However, there is no evidence whatsoever to indicate any wrongdoing by Zahid or link to any gambling kingpin. It is only talk, simplistic association and speculation. 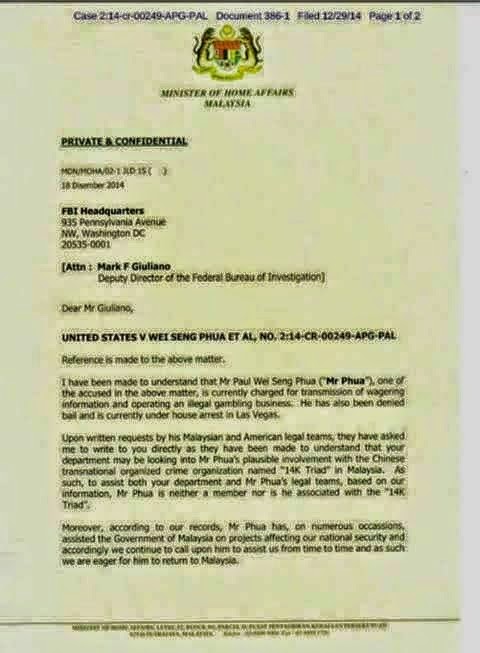 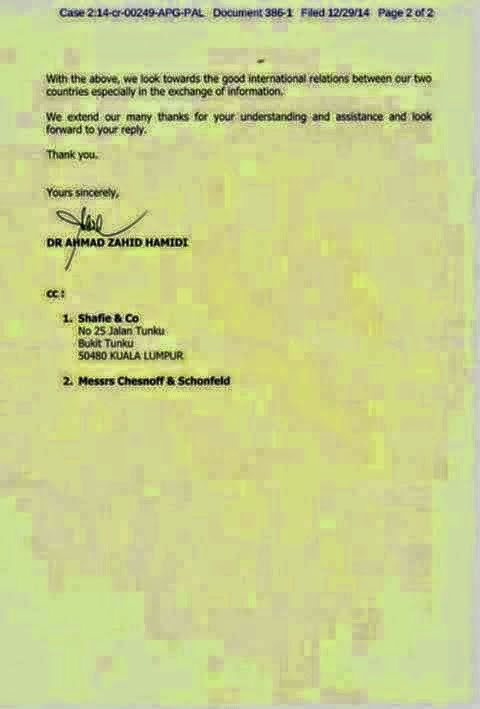 It may not be proper for Zahid to correspond directly to FBI. He should not have wrote the letter at the mere request of a lawyer. And, he had exposed Paul Phua and made him a dead man walking.

Logically speaking, there is nothing unusual in a government to government correspondence. Such correspondence should have been treated with utmost confidentiality by FBI. Thus, how could such a letter be produced in court by either FBI or Paul Phua's lawyer?

Is security slacking at the FBI office that the letter could gotten leaked to the SCMP? Was FBI infiltrated by underworld or a sinister game is being played by FBI towards Zahid? They are capable of doing intentional leak [read here].

Zahid explained his position to cabinet and it was accepted. [Read Mkini here] Security cannot be made open to the public. Most likely, there are undisclosed intention behind the letter which are for your ears only and not fully disclosed to the cabinet.

It was only Malaysiakini that had been drumming up the issue and creating the perception Zahid had acted independently and there is conflict with the police.

Again, they tried to implicate the Foreign Ministry and was responded with a serious tap on the hand by Dato Anifah Aman [read in Rocky Bru in his blog here and his FB here.]

Zahid is believed to be giving a press statement today.

Only few days ago, Friday last week, Hishamuddin was asked to comment on Zahid's case. His response, as reported by Malaysiakini [read here], shows a reluctance to assist.

Maybe it is typical Malaysiakini misreporting to pit one UMNO leader against another. However, there are reasons to believe that there was intention by the Hishamuddin camp.

By right, a cabinet member or party leader should not take opportunity on an issue played up by oppositions to discredit the government or ruling party. They are supposed to work as a team and defend their colleague from any wrongful accusation.

For Hishamuddin's people to do so, Hishamuddin is not without any fault and cock-up. If not propped up by the MH370, he would continued to languish in public confidence.

Save the detail, let us only mention Lahad Datu, Washington, Yangoon and Katmandu as places where Hishamuddin's verbal incontinence and moves put Malaysia's security at risk. Zahid has his fair share too like the US requested anti-terror law announced for his usual pre-PWTC public relation stunt.

However, what good can be derived from leaders stripping each other in public. As the source said, Zahid's team had understandably made counter move to response to the moves by Hishamuddin's people.

In the face of diversity, both Hishamuddin and Zahid should have the honour and integrity as leaders to set aside their political rivalry and give priority to the party and government before self.

They should be setting the example for a more gentleman and mature politics to meet the expectation of the time. The time have changed and so do the expectation.

Party members should be allowed to choose based on track record, leader's stance on issues and what leaders have to offer for the party and nation. The rise to the top of the leadership has to be on the basis of ability and acceptability.
at 1/15/2015 08:29:00 AM

No, Sir. With all due respect, it is much more serious than that.

It got much more serious when "national security" was invoked by, if I remember right, by Zahid himself.

Since when has the government "outsourced" matters involving "national security" to third-party outsiders who are not part of the intelligence/security apparatus?

What type of security clearance does Paul Phua have? Was he vetted by the appropriate agencies to make sure that he is "clean", has no " baggage" and is not "beholden" to any foreign power?


Or was Zahid so naive to believe that he could trust the FBI?

The FBI, after all, is tasked with the responsibility for domestic security and intelligence in the US. It's first priority is the national interest of the US. Dealings with other countries, like Malaysia, is a distant second priority.

So, what exactly is going on here?

So the police said he has links and zahid said no. Which is which now? Or does that even matter now? As long as all is well in dumno paradise?

Power is everything Bro...

UMNO is out for Grabs especially when its leader is considered lame and due to be ousted!

Excuse me, ah, but did Pak Zahid write the letter to the FBI in Bahasa Malaysia?

If he did, then, maybe, the FBI botched up the translation of Pak Zahid's letter into American English.

I don't think that the FBI has translators fluent in BM on it's payroll.

So an erroneous translation may have contributed to the confusion.

Or, more likely, Pak Zahid's letter was written in Malaysian English which is noted for mangled syntax and casual disregard of grammar.

That could have confused the FBI most thoroughly.

Actually Paul Phua is Malaysia's 007. He is entasked to get intel on US defense and triad connection is just a cover.