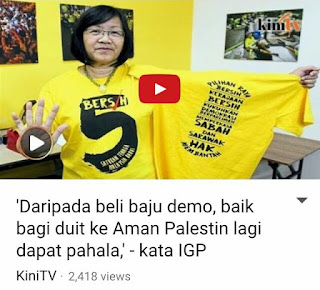 The IGP's words is wise.

If it is not for the oppressed people of Palestine, there are many other good cause the money to buy that T shirt could be channeled.

Since leaving Perkasa out of frustration with the myopic views of the many "mantan"s still stuck in a timewarp and are all talk with no initiative, any NGO with only politically motivated agenda without any specific program is viewed with scepticism.


Despite the agenda for progressive change Ambiga or Maria Chin claimed to propagate, Bersih is all rhetorics without any firm plan and merely quest for political power.

Thus, they might as well not hide anymore. More so, power hungry Mahathir is on their side. It exposes their politicians' pragmatism nature.

Admit it that they are politicians and might just as well join the opposition or form another opposition party. 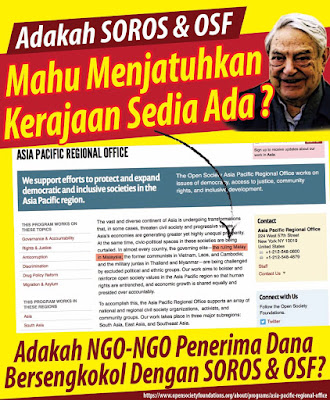 More so, it is no more a secret that they are recipients of Open Society Foundation.

OSF is the foundation front of the opportunistic international financier that strive by covertly creating economic chaos globally through financing dissidents willing to carry out their evil liberal ideology.

Off course, this have been heard repeatedly leading to every Bersih demonstrations.

But the latest DCLeaks document proves what had been brush off as conspiracy theory turned out true.

Finally, the left admit it. They now argue it is not wrong to receive it. And, they justify the agenda of the evil Jew they like and try divert away from his insidious history of economic destruction.

Basically, the yellow revolution they are attempting to create is, as any other colour revolution, are funded by foreign covert ops.

There is nothing honourable with any covert op. 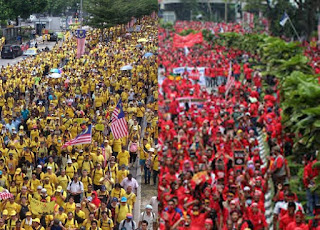 The red revolution that emulated the Thailand phenomenon of the past was created to neutralise or limit the effectiveness of the yellow revolutioners.

They say it is linked to UMNO or pro-government outfit. At least, that is what part Soros-owned Malaysiakini claimed.

If both sides has their donors, it means money was poured in to make available the yellow and red T shirts to the participants.

Now this could be only information from sources but it is one source that have repeatedly proven to be reliable and most of the time turned out to be true.

It seemed both the yellow and red T shirts were made from the same factory thus raising the suspicion there could be a scam syndicate.

The source claimed the yellow people sold RM600,000 worth of T shirts. Despite getting sponsors, they were making money from the people they incite to become demonstrators.

The red side was known not to be selling it so one can assume it is sponsored. The convenient assumption is it is some UMNO-linked sourced.

But that is too obvious. Lets think outside the box. What if the red T shirt people got their T shirt for free?

Some bloke sponsored some of the earlier red T shirt groups to create drama through their provocative ways. It serve to anger the yellow shirt supporters and they go out of the way to buy.

Are claiming the possibility that Jamal Pak Tongkol was in cohoot with Maria Chin? Possible, no money making scheme is impossible with Jamal.

Still a conspiracy theory. It seemed each T shirts were sold by Bersih organisers at RM25 each. So it registers as profit for the limited by guarantee company.

Did they take care of GST? 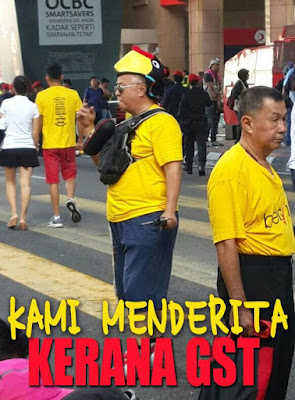 Hope Customs chase them and force these capitalist Soros backed agitators pay their tax even if they oppose GST. RM600,000 sales would amount to 28,000 pieces sold so 6% of RM600,000 is a lot of money due for consumption within the country.

If it cost the factory RM5 each and sold to Bersih at RM10 each, the factory would make at least RM140,000.

After all, Bersih were doing promotion of Bersih 5.0 throughout the country in their jelajah convoy. The T shirt sold could be more than the 28,000 estimate.

According to Malaysiakini or shall be better known as Soroskini, there were 40,000 participants today. It means more than RM600,000 sales per order of T shirts. Duit sponsor sapu. T shirt pun sapu. It may come up to juta.

It adds to the prove of the point of our previous posting that having Bersih gathering "Doesn't serve any purpose". There were comments arguing against the previous posting but no released due to ill mannered language.

Best estimate to today's rally is about 15-20,000 participants. It means a lot of those that bought yellow T shirts did not turn up. Police pre-Bersih roundup may have had an impact.

Off course, some say more and some say less. But it is less than Bersih 4.0. And without PAS, the cause is still lost. The Mahathir effect as Dato Salleh Said Keruak described turned out to be negative.

The message from the demands of Bersih will be lost but the matter that will be talked about among the non-converted is that Mahathir's presence hardly produce additional impact.

Mahathir was pictured walking with the same bunch of few familiar faces.


The sheer presence of majority Chinese will still be talked about.

DAP will be said to lead the PH government should they win. All the bad governance in Penang will be taken to national level.

Only few opposition leaders made their presence but it will still be said that Bersih is opposition and red is UMNO.

Where is the talk of democrasy or electoral process or good governance or reform?

Is not the suggestion to get fewer demonstrators but get media coverage better to send out the message than the diversionary messages of big crowd?

Nevertheless, there is supposed to be value in political psychological warfare.

But the political momentum for opposition could be attained only by having larger number had presence and no other nonsense happening that divert attention. 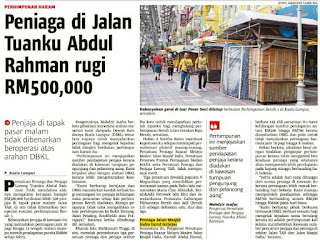 The traders that lost a good Saturday income will always be forgotten by the Bersih 5.0 people. The last Bersih 4.0 they refused to clean up their mess.

Only the Jalan Masjid India jeweller, Syed Akbar is happy. He thinks the conniving mamak will return to control government.

At the end, it is the T shirt sellers that really untung.

“You can search the world over, but you won’t find happiness until you realize that happiness isn’t getting what you want. It’s being content with what you already have.
Yasmin Mogahed

“I’ll tell you the only way to survive: Ask God to place a semi-permeable shield around your heart: One that only allows what He loves to enter.
Yasmin Mogahed

“You put your head on the ground, and in that moment everything was okay.
Yasmin Mogahed

“Ya Allah, fulfill all my needs in a way that is pleasing to You. Or kill the need.
Yasmin Mogahed

“Times of hardship can act as both an indicator, as well as a cure, for our broken relationship with our Creator.

(45:23) Did you ever consider the case of him who took his desire as his god, and then Allah caused him to go astray despite knowledge, and sealed his hearing and his heart, and cast a veil over his sight?32 Who, after Allah, can direct him to the Right Way? Will you not take heed?

31:15 But if they endeavor to make you associate with Me that of which you have no knowledge, do not obey them but accompany them in [this] world with appropriate kindness and follow the way of those who turn back to Me [in repentance]. Then to Me will be your return, and I will inform you about what you used to do.

31:16 [And Luqman said], "O my son, indeed if wrong should be the weight of a mustard seed and should be within a rock or [anywhere] in the heavens or in the earth, Allah will bring it forth. Indeed, Allah is Subtle and Acquainted.

31:17 O my son, establish prayer, enjoin what is right, forbid what is wrong, and be patient over what befalls you. Indeed, [all] that is of the matters [requiring] determination.

31:18 And do not turn your cheek [in contempt] toward people and do not walk through the earth exultantly. Indeed, Allah does not like everyone self-deluded and boastful.

31:19 And be moderate in your pace and lower your voice; indeed, the most disagreeable of sounds is the voice of donkeys."

After almost 60 years of rule: 7 million people requires BR1M. That is almost 25% of POPULATION. (higher if as % of household). Why are they so poor? Majority are malays.
The ruling class lives a luxurious lifestyle. The ministers are arrogant. One minister refers to people as "nobodies". Many thinks the rakyat are stupid and can be easily fooled. Enough la....please instill some fear of God and the akhirah.

22 of that 60 years was Mahathir that you now support and Najib is correcting that past.

Throughout the 60 years, Mahathir was the pest in all the administrations except that of Tun Razak for 1970-76.

Mahathir's interference is too defend his corruption, cronyism and nepotism legacy, perpetuate Mukhhriz or his other consented heir apparent, and protect the wealth and economic interest of his family, trustee, proxies, and cronies.

That is your 60 years. You are blaming the wrong person.