Don't cry for America, Move to the Asian Century 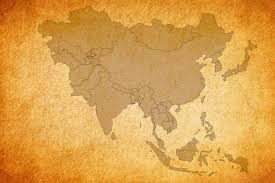 The American people have spoken and the new American President is Donald Trump.

Trump campaign hardly spelled out specific plan so it made financial market rather nervous as stock market and dollar fell upon expectation Trump was to win the election.

Market buy or sell on uncertainty and unwind upon facts. Both markets have rebounded in Asian time zone this morning as players reassess the impact of Trump on business and economy.

However it is a different reaction on the political front. There was the customary congratulatory message from world leaders, including our PM dubbed by Trump as his favourite PM.

But there are tinge of nervousness in their language, especially nations mentioned in his campaign. Generally they are worried of the direction of American foreign policies.

He did say why have nuclear when it is not used. Will US troop withdraw from Europe and elsewhere unless being paid? South Korea cabinet convened a special meeting to discuss Trump victory.

Around the world, people are aghast with the decision of American voters. Too much uncertainty.

Trump read the text to give the usual "lets unite" speech. The reaction on the ground in America is not conciliatory.

In America and all over the world, people are still in a state of shock. 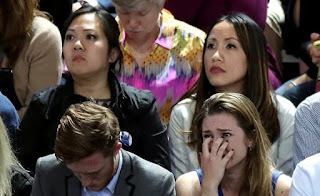 At the time of posting, there are protests against Trump in front of Trump Tower in New York City and more than 7 cities in the US.

Protestors acknowledged the democratic process that entitled him to the presidency but they want the rights to be heard.

They could not grasp the reality that voters, via electoral college system, were not looking at the high ideals that Clinton preached.

The main issue to Trump.voters is economics and jobs. Trump voters of 87% whites are fed-up with the political establishment. Despite his personal shortcomings, they saw in Trump, an outsider who will try to fix things.

A reminder to Malaysian voters. Voice of the majority segment of population cannot be ignored. Which segment are you seeking for support?

As mentioned in passing in past posting in this blog, the Brexit phenomenon in the UK was that of common folks voices and concerns have out voted the learned, urban and globalist again.

If Trump win ilhas made it a trend, though some say it is racism driven, the Brexit phenomenon could happen in Malaysia.

Hillary won the popular votes but it was Trump that won the electoral colleges by 60, and took the majority battleground and swing states and more.

The media and polls never saw it coming. The media is desperately trying to console the public with the message Trump has been chosen and as Hillary said, he should be given a chance.

If the dissatisfaction continue to linger, the US will be heading towards a permanent division along partisan line, generation, gender, race, religion and sexuality. It is the same agitation to divide and "conquer" by US operatives to bring about destruction wherever in the world the American poke their finger into including Malaysia.

DC Leak recently exposed documents of Soros-led operations to throw the Malaysian government in the next general election.

With Tun Dr Mahathir so gung ho and determined to bring Dato Najib down to the point of doing his own "as low as one can go" Trump politics, he is ever willing to cooperate with American covert operator in the country.

Matthias Chang has promised so in his latest message as published by Rocky Bru here.

Trump politics divided the nation and placed Mexican and Latinos, Blacks, Muslims, women, liberals, immigrants, and all those mentioned in his campaign into a state of fear.

He wants immediate actions on ISIS. Can he do so once he is in the system?

Will he build the wall to stop immigrants from crossing the border to the US? Will no Muslims allowed to enter the US? Will all the talk of extreme vetting be carried out? And the list goes on. [Read anti-Hillary Global research here.]

He wants to rid off Obamacare without any "wonderful" plan spelled out yet.

It won't be that easy but Trump being Trump - thin-skinned, stubborn, prideful, vengeful, heartless, and schemer - it could happen. The Americans allowed him to get away without releasing his tax returns.

There are a thousand reasons why Trump should not be President but Clinton far outweigh in the trust category. Its FBI investigation on her e-mails that knocked the final nail to her long illustrous career in public service.

Will Trump pursue her or in politically correct words, in which he should be learning, allow the independence of law enforcement and judiciary?

There was a lot said during the campaign and that became the attraction to his rallies that far out number Clinton. Different people will hold him accountable to honour for different words.

To quote the Hollywood line, "we are in for a bumpy ride".

The election campaign revealed America is not a great country anymore. It is heavily in debt. The economy is in a mess. It's losing control of strategic industry. And it's economic leadership in the world is waning.

It will take time for Trump to setttle in. He will only be taking his oath of office in January. Trump alone cannot turn around the mess build up over decades since another Republican, Richard Nixon.

In the meantime, there is uncertainty in the direction of the American policies on economy, immigration, foreign policy, military, middle east, tax, public health insurance, and more.

The judiciary will be in limbo as there will also be a new Attorney General. It is something Malaysians are keeping an eye on, especially October 28th deadline for defendents to submit defense has long passed. With the silence by all parties concerned, something is not right?

The Democrat can be at peace. If the country is in a disaster, it is happening under the Grand Ole Party (GOP). 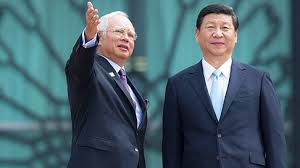 With much uncertainty on the part of the Americans, it is a good move by Najib to make the hedge with China.

Opposition is working over time at discrediting the historic visit to raise petty and ridiculous short sighted pennies and dimes issues with regard to the ECRL and impact to the national debt. Someone up there must do their work to explain the multiplier effect to the economy.

If it is made available to Malaysia, there are only two sources of money in the world to enable us to build the necessary infrastructure to be a developed nation today; the American-Jewish financier or Chinese.

The American-Jewish choice comes with a long list of conditions. They may be more civil, courteous, and perhaps speaking like English or Bostonian gentleman, but occidental history is marred with centuries of invasions, destruction, slavery, and exploitation.

China is also a superpower but their military ambition are limited to near their border. The South China Seas arise out of strategic and commercial need to protect their sea route from the incursive American pivot policy.

Both are superpowers and outside our capability to take them on. So Malaysia has to be smart and be active in the world of diplomacy. We need to make friends than follow the ways of the old loud mouth more interested with preserving his legacy, dynasty and cronies.

There is more predictability in dealing with American. At least, they play by a certain rule. But America is on the other side of the globe and too far away. Their military might get easily beaten by body bags of their sons and few daughters returned to be buried.

American diplomacy have not bear into investment into the country of late. The last time Obama came to Malaysia only RM1 billion investment could be secured. What is not known is Obama sent his people to Putrajaya to secure investment for the redevelopment of Detroit and lobbying solar project work.

One trip to China could bear us RM144 billion and many hundreds of billion to come.

Trump promised to cancel TPPA and will likely lead America inward into isolation. Cost cutting businessman mindset and more so, the Republican free market economic ideology will not solve their twin deficit in the near term and bring them closer to the tipping point.

He want to make America great again but how? No one knows yet but we know America may not be stronger together but a divided nation.

Why wait and hope on these orang putih when we have the Asian Century ahead of us? Have they not plundered us enough?

It won't be intelligent to be any part of the always harebrained ideas of neo-con USA antagonising China or anybody for the sake of the US. That has cost many countries loss of countless lives, enormous destruction and legacies of decay and rot in economy, society, ordinary people continuing to die (depleted uranium, Agent Orange...)...

No doubt the US will continue to cause deaths and destruction all over the world either directly ("humanitarian" intervention, regime change, coups, assassinations) or indirectly (using proxies, politicians, running dogs...)but no Malaysians should willingly or unwittingly allow himself to be used.

Malaysians should be masters of themselves, not dump themselves on the Yanks and expect them to save Malaysians.

Malaysians should look forward to the new century - the Asian one.

Like it or not, China stands top in the pecking order. It has not shown itself to be anyway like the US, I won't worry too early. Not especially when our monkeys make nothing of the US' causing mayhem all over the world, and for decades now.

When and if China becomes a problem, the world can deal with that.

Meanwhile, we get more glowing account of what China is doing in Africa than otherwise. Sure, nothing it does is altruistic, but China does not bomb, destroy, slaughter and plunder its way to get rich.

And Malaysians should be wary of the old tricks, with the "Pivot to Asia", as with the US control freakery anywhere else, the appearance of Isis will precede further direct or indirect intervention. The likes of Soros will get their stooges to work harder.

If we are not cautious, awake, there will be all the deaths and destruction for us that has befallen everywhere else all over the world that the US want to influence and control, we will be like Iraq, Syria, Afghanistan,... and definitely Vietnam when the US came to "save the world".

I won't be disingenuous, alarmist, China can hardly defend itself and that will be still so for decades to come. China can definitely not hold any territory abroad - and without gravely injuring itself if it tries to.

The interest of the USA should not matter to Malaysians, it should only be our own interest that matters. Playing the proxies, stooges, and running monkeys to the US has not ever helped any country except to get them destabilised and destroyed.

Destabilisation, civil conflicts and insecurity are old tricks of the West. No Malaysian should fall for that if they love their country.

Is not our problem. Who cares. Trump want island economy and zero foreign policy. He must walk the talk. Kick our immigrants and do called imported human capital so be it. Is the redneck voice now not the liberal. Malaysia need to focus its own geographical economic region growth. The economic here is just the beginning.