Dissappointing-ly ... Mahathir is not all that 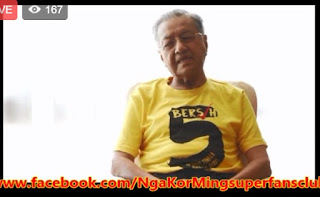 Wisdom consists of knowing how to distinguish the nature of trouble, and in choosing the lesser evil.

Most Tun Dr Mahathir supporters blindly take his every words as good without fact checking and giving it a second thought. They believe he always does his homework and always has his facts up his sleeve.

Mahathir is a nice man, soft spoken, humourous and sometimes shy. But he is a different animal when he puts on his political hat on.

Seldom described as a Machivellian politician in every sense of the word. He would not hold back and do anything necessary - one can say anything in the widest of possibilities - in his quest for power and in particular when it comes to toppling a leader down.

Nothing unusual with current happening. He has a history of doing all the seven deadly sin to win a political war.

Do read Malaysia Today here as this blog suspect here and it could be the next flavour here. Be wary of him when he is on a political warpath.

In the latest onslaught to discredit the historic China trip by Dato Najib, he lied in his blog.

It is the outright lying in the last meeting last year that was the turn off and turning point to switch support from him.

Yes, all politicians lie, but a statesman and retired politicans should not any more. More so, one can sense he is up to his Machivellian self and hiding his true intention.

One can discredit Dato Abdul Kadir Jasin for his intentional factual errors and questionable arguments. because he had never had formal education in economics and business.

But for Mahathir to be factually wrong, has he lost his grip or marble .....?

Or it is just his Machivellian self willing to deceive in order to change the public behaviour, opinion and emotion?

Mahathir is not all that. 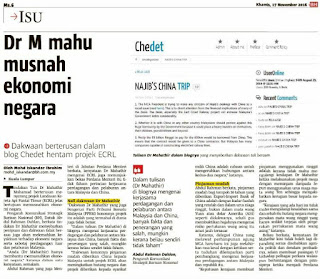 Dato Abdul Rahman Dahlan issued a statement to response to his latest blog posting on the China trip:

1. I refer to former Prime Minister Tun Dr Mahathir's blog post dated 16th Nov 2016 titled "Najib's China Trip" which contains numerous errors and misconceptions - either deliberate or due to a lack of understanding of the details.

2. The MCA President was not trying to make Najib's dealings with China as a racial issue. He was pointing out to the unfair criticism of the historic RM143 billion worth of trade and investment deals that Malaysia had signed with our largest trading partner and investor.

The China delegates who had visited the recent MCA annual assembly had also expressed regret and unhappiness at the opposition over the unfair criticism of our two nations trading and investment deals.

3. The crux of Tun Mahathir's criticism seems to center on the soft loan that Malaysia will take on to build the East Coast Railway project which he said will increase the Malaysia Government's debts considerably and that the main contractor would be a Chinese company.

4. The soft loan given by the Export-Import Bank of China is on very favorable terms with a low interest rate and has a 20 years tenure. It is also denominated in Ringgit Malaysia and not in USD or Yuan as alleged by Tun Mahathir.

5. Due to the rapid development of rail link in China over the past two decades resulting in a rail network of more than 125,000 kilometers, there is little doubt that China is now among the leaders in railways and rail technology.

6. Although the main contractor will be China's largest construction company, our agreement is that a significant portion of this work will be sub-contracted to local companies. There will also be a transfer of technology.

7. The structure of this project to involve local contractors is different from the construction of the KLCC where the architect was an Argentinean, tower 1 was contracted to the South Koreans while a Japanese company was built tower 2.

8. It is regrettable that Tun Mahathir also repeats the allegation that on a per kilometer basis, the ECRL is over-priced.  These allegations have already been been proven untrue by detailed answers by Dato' Abdul Rahman Dahlan and by Datuk Seri Liow Tiong Lai.

11. Additionally, the ECRL will directly connect the Kuantan and Kemamam ports in the east with Port Klang on the west coast resulting in a strategic advantage in logistics handling and shipping for Malaysia.

This 688km long main line plus 20km of spur tracks will be a game-changer.

12. As with any greenfield infrastructure project with strategic importance, there is significant economic multiplier and spill-over effects that will boost economic economy.

This will mean that we will more than recover its investment in the ECRL from additional tax gained, asset appreciation and other direct and or indirect revenues.

13. Tun Mahathir and his colleagues in the PPBM opposition party continues to wrongly state that 1MDB's debt is RM53 billion despite knowing that 1MDB had undergone a rationalization exercise.

14. Due to the successful divestment of Edra Energy, a stake in Bandar Malaysia and other rationalization exercises, 1MDB's debt has been significantly reduced to about RM31 billion.

Despite knowing this, how is it possible that Tun Mahathir still insist that 1MDB's debt remains at RM53 billion?

15. Other than the three outstanding long-term bonds are with tenures of 10 years to 30 years are appropriately matched to revenues and profits of 1MDB's current projects.

Other than these bonds, no other 1MDB loans or debts remains.

16. 1MDB currently has RM1.9 billion in cash that will allow it to further develop its strategic Tun Razak Exchange and Bandar Malaysia projects that will add significantly to Malaysia's growth over the next decade.

17. It is unfortunate that Tun Mahathir has been wrongly advised that the government's current outstanding debt of RM600 billion is denominated in US Dollars where he allege that due to the strengthening of the US currency, our government debt is now RM900 billion.

18.  For Tun Mahathir's information, according to Bank Negara's latest statistics, 97% of Malaysia's debt is denominated in Ringgit Malaysia. Any changes in foreign exchange rates has only a marginal effect on the value of our government debt.

19. The government's conscious decision to only borrow in Ringgit Malaysia was a result of learning from the past where Tun Mahathir's government had borrowed substantially from Japan with loans denominated in Yen to construct mega-projects - among others, the Kuala Lumpur International Airport, the Pahang-Selangor Raw Water Transfer Project, the Kenyir Hydroelectric Power Plant  and the Port Dickson Power Station projects.

The subsequent appreciation of the Japanese Yen after the loans had caused significant losses to our country.

20. The current government is determined not to repeat this mistake of the past and that is why the government's debt is denominated in Ringgit Malaysia and is only marginally affected by foreign currency exchange movements.

21. As a result of his personal vendetta, Tun Mahathir in partnership with the opposition continues to resort to using lies and scare tactics to repeatedly undermine the confidence of all Malaysians and allege that Malaysia is on the path of bankruptcy.

22. Since the founding of Malaysia, the opposition led by the DAP had continuously claimed that Malaysia will soon go bankrupt. Those who have lived in the 1960s onwards can attest to this.

Despite more than 50 years of these bankrupt allegations, Malaysia continues to grow from strength to strength.

23. Currently, all three major international credit rating agencies gives Malaysia an "A" credit rating which signifies investment grade. Our GDP growth recently recovered in the 3rd quarter to 4.3%, we are now in our 227th consecutive  month of trade surplus, we have a current account surplus and our foreign exchange reserves holds steady at USD97 billion.

No one else, except Tun Mahathir and the opposition claims that Malaysia is going bankrupt - and they have said the same thing for more than 50 years.

24. We would also like to ask Tun Mahathir why Malaysia did not go bankrupt when he more than doubled our debt from 44% to 103.4% Debt-to-GDP ratio in 1986 within the first 5 years of him becoming prime minister.

If at 103.4%, we did not go bankrupt then. So how is it that with the current debt-to-GDP ratio of 54%, Malaysia will go bankrupt now?

25. It is hard to take Tun Mahathir's words seriously nowadays. Due to his political agenda and personal vengeance, he has u-turned on so many things he had said of in the past - among these include his views on Anwar Ibrahim, BERSIH, George Soros, DAP and his call for foreign intervention.

26. However,  by resorting to outright lies and baseless allegations to continually undermine confidence in our country's economy and by actively sabotaging our foreign trade deals and investments, you are helping to destroy Malaysia’s economy.

To clarify a point in the statement made by the BN Strategic Communications team yesterday evening, the soft loan facility for the ECRL is in a mix of Chinese Yuan and Ringgit -  and not just in Ringgit alone.

This has the effect of denominating all loan repayments in Ringgit terms at a fixed RMB-RM exchange rate which eliminates the risk of exchange rate fluctuation.

Therefore, there will still not be any foreign exchange risks for this loan as alleged by Tun Mahathir.

Point 4 of the previous statement has been amended as such.


The Clinton, Obama and many others American leaders and media asked Americans to give Trump a chance to lead and manage their country. Mahathir must learn from them. Leaders are not meant to manage a country for ever. Only prophets are allowed to do so by the grace of Allah. So tell Mahathir to grow up and not to remain as a child forever.

(26:71) They answered: "There are some idols that we worship and are devoted to them with constancy."

(26:75) Thereupon, Abraham said: "Have you seen (with your eyes) those whom you have been worshipping,

(26:83) (And then Abraham prayed): "My Lord, endow me with knowledge and wisdom and join me with the righteous,

(26:84) and grant me an honourable reputation among posterity,

16:63 By Allah , We did certainly send [messengers] to nations before you, but Satan made their deeds attractive to them. And he is the disbelievers' ally today [as well], and they will have a painful punishment.

16:64 And We have not revealed to you the Book, [O Muhammad], except for you to make clear to them that wherein they have differed and as guidance and mercy for a people who believe.

16:65 And Allah has sent down rain from the sky and given life thereby to the earth after its lifelessness. Indeed in that is a sign for a people who listen.

16:66 And indeed, for you in grazing livestock is a lesson. We give you drink from what is in their bellies - between excretion and blood - pure milk, palatable to drinkers.

16:67 And from the fruits of the palm trees and grapevines you take intoxicant and good provision. Indeed in that is a sign for a people who reason.

16:68 And your Lord inspired to the bee, "Take for yourself among the mountains, houses, and among the trees and [in] that which they construct.

16:69 Then eat from all the fruits and follow the ways of your Lord laid down [for you]." There emerges from their bellies a drink, varying in colors, in which there is healing for people. Indeed in that is a sign for a people who give thought.

16:70 And Allah created you; then He will take you in death. And among you is he who is reversed to the most decrepit [old] age so that he will not know, after [having had] knowledge, a thing. Indeed, Allah is Knowing and Competent.

16:71 And Allah has favored some of you over others in provision. But those who were favored would not hand over their provision to those whom their right hands possess so they would be equal to them therein. Then is it the favor of Allah they reject?

“A believer to another believer is like two hands, one washes the other (correcting each other).
Ibn Taymiyyah