The quarrel between Adam Adli and a regular demonstrator of Bersih shows the yellow side have got the message.

One demonstrator felt they should ramp through the police barricade at Bangsar and march to Dataran Merdeka. Adam Adli understood that the repeat of Bersih 4.0 will justify police to take stern action in accordance to the provision of the law against public disorder and organised violence.

The message from the pre-Bersih 5.0 round-up was crystal that police have low tolerance for non-sensical lawbreakers.

Bersih is prejudicial to public order. Traders lost money and there was no order by DBKL to close shops.

And it is prejudicial to the security of the nation. Critics may say it is to preserve the current regime. From what happen in other colour revolutions, Bersih are using demonstration to instill new regime.

That is what Mahathir admitted:


Seeing how Penang is run, their new regime is cruel and corrupt just like Mahathir's.

DCLeak revelation of documents from George Soros's Open Society Foundation to bring about regime change in the next election was clear proof that there were foreign covert operation to systematically bring about the downfall of a constitutionally elected government.

The government is instituted through a constitutionally inscribed democratic process of election and the Agong empowered to appoint the leader with the biggest support as Prime Minister.

To seek the overthrow of Dato Najib though a demonstration, it is an offense under SOSMA as it is tantamount to "excite the dissatisfaction" against Agong's appointment.

All is provided under SOSMA, the law being dubbed as replacement of ISA but never agreed by all lawyer. 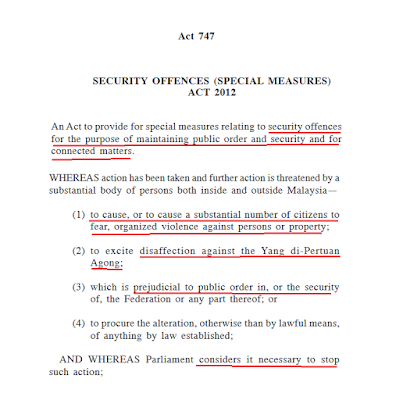 That label is totally wrong. Both are security laws and no government should not do with a security law. The difference is there is legal recourse under Najib's SOSMA than Mahathir favoured ISA.

Under Dato Najib, ISA was repealed but the various security law replacing them are made with legal recourse for the accused.

SOSMA, that is under fire based on political rhetorics, have provision Section 17 that state Evidence Act 1950 is applicable. There will be a court hearing.

In fact, the opposition legal team will be making a habeas corpus application to the court. If they are lucky and have sound basis, it will be accepted by the court and the incident of Matthias Chang and Khairuddin Abu Hasan getting released could occur again.

The first threat terrorist linked detention won their release. So what are these cry babies lawyers sulking about?

One of Matthias and Khairuddin's lawyer, Hanif Khatri is assisting Maria Chin.

So what is the big deal of Maria being detained for 28 days to assist investigation under a legally passed law?

It is only procedural to assist investigation.

The lawyers questioned why detain under SOSMA. Sivarasa claimed she is to be charged under Penal Code 124C but why detained under law meant for suspected terrorists and militants?

That is what a lying lawyer and politician say. SOSMA is not just for anti-terrorism and anti-militancy. The ANC should hear out their Tan Sri Gani Patail defense of SOSMA here.

The first line of the law mentioned "public order and security and connected matter". Anyway, she is as stubborn as any fanatic militant in her attitude and actions to defy the law and police?

Another cry baby lawyer argued that rapist and murderer are detained for 14 days but Maria for 28 days. Well ... national security and foreign interference are bigger threat than rapist and murderer. It relates to sovereignty. The documents are below:

The lawyers may have realised their arguments are crybaby arguments. So they claimed it is intimidation against NGO.

If the NGO did nothing wrong, what is there to be cock a doodle do about? Soon they will be out la ...

They accused the law enforcement police as abusing the law. It is a fancy way of saying the police did it according to the law but they should not have done it on them.

And to give it more drama, Najib is accused of  sliding to dictatorship. Wattaheck! The law is clear that the authority lies with police. What does it got to do with Najib?

Below is a scene under Mahathir administration to quelch demonstrators:


Did you see such a thing under Najib era? In fact, police were harrassed and police patrol car over turned!

And, Mahathir said Najib is cruel and the constitution allows for public demonstration.

He said he is proud that they are brave. Police should not put up blockade. But did he criticised the law SOSMA?

No because he defended and abused ISA. He will use SOSMA when his stooge gain power.

It shows Bersih 5.0 demonstaters are "clueless puppet". Opposition leaders too are in-denial to the fact Mahathir hijacked Maria Chin's rhetoric for democratic reform to make it about himself and his personal vengence to overthrow Najib.

Giving warning to not derail reform? Is Mahathir ever for reform? Ha ha ha ... what a comedian?

Mahathir couldn't spell out a single reform plan in his Citizens' Declaration. It was more his accusation of Najib "mencuri" from 1MDB but not a single evidence could be presented.

Lawyers also cried abuse of power. But it is already a lost cause the moment Mahathir became the public image of Bersih 5.0. They should just prepare their case to defend Maria instead of cry baby rhetorical calls of oppression or curbing political dissent.

SOSMA is not to curb political belief: 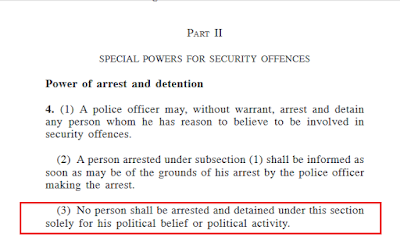 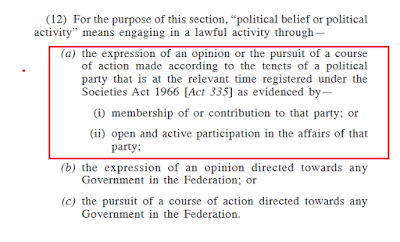 By the way, is Bersih a political party?

Released student leader asked to continue the fight. They could even fight to abolish and repeal SOSMA. They have every right to do so.

If they want to prolong the fight, no sentimental play and mushy mushy stuff to get public  sympathy, please. No sentiment playing argument that SOSMA should not be applied even to Dato Jamal Yunos.

Bersih's ulterior motive is political. Only an anarchic concession from government will ever satisfy them. Their real demand is to hold political power. All these criticisms are pointless and never ending.

As advocated by Dato Nurjazlan, Bersih should just join a political party or form one to enable them to indulge in politcal activities instead of trying to hide behind a registered company.

If they are an NGO, what is their program? T Shirt selling scam?