Shafie building up his political script 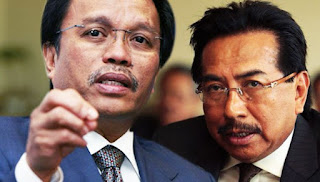 Warisan got their registration in October so such a stunt to give a sense of confidence was only expected. However, it could deceive non-players and Semenanjung observers. It is a bit too many to those in the know of the Sepangar ground.

Sources on the ground laughed it off. There were no more than 10 to 15 applications from Sepangar. It is an area outside the domain of Shafie's Bajau Laut or more precisely, Suluk for him to gain such large number of crossover.

It is an open secret that Shafie have to pull stunt like lucky draw with car as prize to get large crowd. He still has lots more to do than trying to "buy-in" leaders to join him.

It was rumoured, and it would not be a surprise that it was Shafie that created the rumour, if not for MACC raid on Sabah Water, 18 state assemblymen would have been "bought" over.

Those in the know of Sabah UMNO politics claimed at best, he could only gain 8 former Division leaders left to the wayside due to gambling problems.

He needs a convincing story to tell and is in  the midst of building his script or in more sophisticated parlance, political narrative. One can expect him to pick on his old nemesis, Sabah CM Dato Musa Aman.

Late in the game

Before he could do any credible attack, he need to remove the link with the Sabah Water Department corruption case. He dismissed his involvement in his address in Parliament and again he tried to redirect the issue to the CM.

However, to a question by former Deputy Minister, Dato Lajim Ukin in the Sabah State Assembly on November 22nd last week, the Assistant Minister of Finance of Sabah told the house that the water program under investigation is Program Bekalan Air Luar Bandar (BALB) under KKLW. [Read Capt M here].

On an equally bigger matter, Shafie tried to bring back the now in fashion Sabah for Sabahan theme. But it was shrugged off by PBS Deputy President Maximus Ongkili as being copy cat of their 35 years agenda.

Pairin has announced to not run in the next General Election and Maximus is a likely successor as PBS President. Maximus said the theme has shifted to Sabah for Malaysian. He meant to emphasise that there is no more an issue of Sabah leaving Malaysia.

Furthermore, Prime Minister Dato Najib has given commitment to review and abide by the Malaysia agreement 1963.

Shafie realised that MA63 is one of two of Mahathir's handicap in Sabah. They other handicap he share with is Projek IC to illegally gave away citizenship to illegal immigrant.

Maybe that is the issue he tries to cover to claim over weekend in Melaka that 700,000 immigrant from China wiill be given citizenship to vote for BN for next GE. A lie similar to anwar's 40,000 Bangla Desh.

Mahathir's main men in Sabah tried to dispel the notion that he had infringed on the MA63. Tan Sri Harris Salleh, the Mahathir appointed former Chief Minister that turn a blind eye to the Projek IC going-ons was reported by FMT: 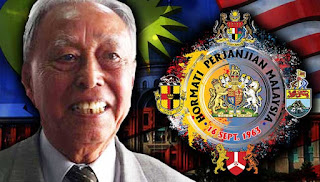 
The former chief minister says there are several questions that need to be answered on MA63.

For starters, he said in a statement carried by the Daily Express, there was the question of the legal validity of MA63.

He agreed with Sabah Chief Minister Musa Aman that MA63 and the constitutional documents on Malaysia had been incorporated in the Federal Constitution.

“Those relying on MA63 should determine its position, in relation to the power of the federal government, besides its validity,” said Harris.

According to Harris, these are the questions that arise:

Does it mean that all laws passed by the Malaysian Parliament must comply with MA63?

If any law does not, is it illegal?

Is MA63 more supreme than the Malaysian Parliament?

If so, does it mean the Malaysian Parliament is subordinate to MA63?

The amendment was passed by Parliament in 1976, he reminded, and there was representation by all states.

He also agreed with the Sabah chief minister that there was “no substantive change” in the status of Sabah and Sarawak under the 1976 amendment.

He suggested that those pushing for a return to the 1963 Constitution should state what rights had been taken away by the federal government from the Borneo states.

He also urged them to consider pushing for acceptable arrangements in power sharing, social order, finance/revenue and natural resources.

He called for comprehensive and thorough consideration on the respective functions, roles, and responsibilities of each component in the federation, including rights to finance and natural resources.

The bottom line, according to Harris, is that 1976 has passed and 1963 was even more distant in the past. Since then, Malaysia had changed and “there’s a whole new world out there”.

In a little digression, the former chief minister blamed “negative” policies for the “plight” of the people in Borneo.

“Sabah and Sarawak are backward because of the indifference of the federal government,” said Harris. “The delivery systems are poor and federal officials are indifferent as well.”


Though Sabah leaders have not responded, probably out respect to an elderly leader, his comment attracted rebuttal from Sarawak: 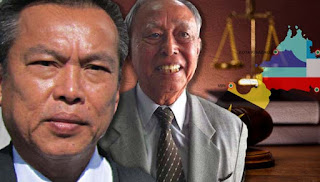 The Malaysia Agreement 1963 (MA63) continues its separate existence even if incorporated in the federal constitution, as it is an international agreement.

“Harris is not the court. Only the court can declare on MA63,” Daniel John Jambun said, speaking on behalf of rights activists in Borneo.

He added that the law is not just about the letter but the spirit too.

“That’s Rule of Law, that’s democracy. Rule by Law is not law at all but dictatorship.”

Peter John Jaban, who echoed Jambun, cautioned Harris against continuing to issue “errorneous” statements in the media on MA63.

They were commenting on a statement by Harris reported in the Sabah newspaper, Daily Express, last week, in which Harris had agreed with Sabah Chief Minister Musa Aman that MA63, and other constitutional documents on Malaysia, have been incorporated in the Federal Constitution of Malaya (now Malaysia).

“It does not mean that MA63 was no longer valid. That is because MA63 is an international agreement and treaty signed by five governments,” Jaban said.

It has also been lodged with the UN secretary-general as a Trust Deed, he added.

Jambun said if Harris actually meant that MA63 was no longer valid, after being incorporated in the federal constitution, “that’s not the position in law”.

As a comparison, Jaban gave the example of the Magna Carta, or the Grand Charter, which was not only part of the uncodified/unwritten British Constitution but continues its separate existence.

“This is irrespective of whether it had been incorporated or otherwise in the British Constitution,” Jaban said.

Jambun argued that the federal constitution was only part of the story.

“MA63 called for a Malaysian constitution. However, the federal constitution was the Malayan Constitution,” he said.

Both men then agreed that the Malaysian constitution is an uncodified/unwritten one.

They also believe that the federal constitution was only one of the constitutional documents making up the Malaysian constitution.

“The others are the constitutional documents on Malaysia. This ensures compliance on the Malaysia concept,” Jambun said

The constitution, as the ultimate political document, has the force of law and hence emerges as the supreme law of the land.

According to Jambun, Harris was wrong in carrying on as if the Malaysian parliament was supreme over the constitution.

“That is because the sovereignty of parliament is confined to its five-year term.”

He said the bottomline is that the sovereignty of parliament cannot be bound by a previous parliament, nor can it bind a future parliament.

Jaban said it was up to the Federal Court – sitting as the Constitutional Court – to interpret the intention of the framers of the constitution.

Musa Aman has similar view with Harris but has since, succumbed to pressure from within UMNO Sabah and without.

At the Sabah state assembly recently, he said BN can work with opposition to fight for Sabah right as he dispel the interpretation of Article 1(2) of the Malaysian Constitution on the status of Sabah as a state in Malaysia was not in concurrent with MA63.

Sabah UMNO and opposition have had conferences and conventions on Sabah rights for several sessions. Shafie and his people did not participate.

The last supposed 5-yearly review on the implementation of MA63 was done during Tun Abdul Razak lifetime after the May 13, 1969 incident. The subsequent one was held but stopped midway due to his death.

It was ignored by subsequent Prime Ministers but Pak Lah did concede to allow the state to manage to Federal allocation and gave additional allocation. It is only Najib that is re-looking the MA63 matter including allowing the RCI on Projek IC.

Mahathir had a torrid political history with Sabah. 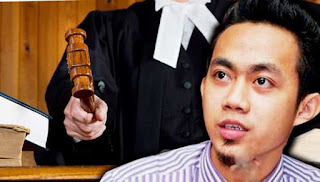 The way it is with Shafie is to revive his old lie to accuse Musa for a corruption casee which he was exonerated by MACC and Hong Kong's ICAC. Shafie slandered Musa as receiving money from Shafie's own man,  Michael Chia and paid PKR AMK Sabah to instigate and viral the issue.

Now, Shafie has his version of agitator like Chegubard to do his bidding, paid bidding for sure:

The SMS has not caught on.

There was a police report on Jufazli and he is likely to face charges under cyberlaw. Jufazli had to put up a bold face and was reported ready to face the court as he intend to use the court to expose more corruptions.

Jufazli is clearly Shafie proxy when he made a call for change in Sabah. Shafie is using Jufazli to accuse Musa of receiving kickback from Water Department projects to divert allegation against him. Only money can salvage Shafie's politics. His corrupt reputation among the people of the interior is overwhelming.

The game is clear. It is not about being legally right or wrong. Shafie is expected to viral the court proceeding of Jufazli allegation in court made against Musa. If court stopped any attempt to raise irrelevent issue, get ready for the wayang!

Before Shafie could do that, the Water Department corruption case will gets it day in court and the RCI finding on illegal immigrant IC will be out first. It will confirm open secrets known for decades in Sabah.

while you were writing like a fake Sabah politic expert, more and more Sabahan is moved by Warisan. belittle that is at your own peril, just like what the mainstream media get caught up with Trump winning or the reality of Brexit happening. now is the era of "insular" politics, in response to the failed elite domineering politics.

well...as long as you get your dedak..who cares right?

You could have just give your point of view instead of uttering nasty words like fake expert and all that.

Well, the fake expert was the one that wrote Anwar will be in trouble and have 18 of his cabang in disarray when he was in the midst of creating the perception Najib goyang the sabah.

Bet the real expert didn't see that a year before it happens. Bet you think Anwar could buy over Sabah politicians. Same as Shafie ...

We are just sharing information from really reliable source on the ground and ....its our dirty little secret.

All who you think is with Shafie may not necessarily be with him. Beware hahaha...