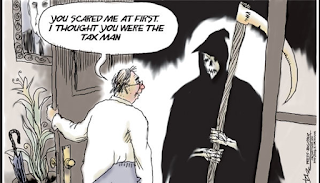 Malaysian have been comfortably evading taxes for years that when government had to urgently act to redress public finances due to sharp decline in oil revenues, there was much hue and cry from the public.

The rampant smuggling out of subsidised food and fuel had only come to light to Malaysians recently. However over decades of neglect, the loss of income of subsidies, and taxes of illegal importing and exporting of goods in and out of the country could run in the hundreds of billion of ringgit.

Lucky for Malaysians that the IRD, unlike their ruthless foreign counterpart, is friendly and accommodating. The legendary and infamous Chicago mob, Al Capone was not brought down by competing gang or police but aggressive and commited tax collectors.

Our end of September posting here on an all out effort by the Australian Tax Office (ATO) on a Malaysian-domiciled business tycoon to forcibly collect tax on foreigner saw a development and gaining attention.

ATO demanded taxes on income of timber tycoon, Sir Hii Yii Ann from business outside Australia, which could be taxes paid to Malaysia instead, by conveniently declaring that he is an Australian tax-resident.

Hii's children and estranged wife resides in Brisbane. But common phenomenon among Malaysians, he is only a visitor. His visiting time hardly exceed and in fact, have been on the decline to the immigration resident requirement of 180 days a year.

Hii has taken his issue with the ATO directly and in court. It seemed the way the tax collection in Australia works it is "collect first and talk later".

ATO is, neither waiting for a decision in the court nor bother to heed the legal proceedings. They are adamant to take any immediate action deemed necessary to collect their tax bill, including seeking court order to seize and liquidate Hii's assets abroad. They are already proceeding in Papua New Guinea and Australia.

If that is not arrogant enough, they could not give commitment to not arrest Hii in the midst of court proceeding. Without the assurance, Hii refrained from attending court and a decision was made against him in absence.

That is how powerful the taxman in Australia is. Arrogant is befitting the description since they are not bothered with the possibility court could judge against them, before resorting to drastic action at their own discretion.

With a court decision against him, Hii is a lost cause in Australia and had to consider the option to pursue justice in the Malaysian court.

It is with his hope that the court here could declare that his domicile and tax residence is Malaysia. The Australian could strike out the suit on the basis of sovereignty but that is the risk Hii was willing to take to avoid the devastating domino effect from the uncompromising ATO action.

Under the Double Tax Agreement between Malaysia and Australia, no one person could have more than one domicile. The "tie-breaker" as interpreted by ATO is status of residence and it was made solely at the discretion of the ATO Commissioner.

The ATO ignored the time factor. Hii is considered residence purely because of frequency and regularity of visits to Australia to see his children.

It is unfathomable that a Malaysian have to prove to a foreign authority of his permanent residency, habitual abode, and personal and business ties to his home country.

The case management was yesterday and one can find report in The Mole here, FMT here, and Malaysian Digest here. The next court date is in December.

Commentary by Rocky Bru here who see the implication to other Malaysians with similar arrangement as Hii with property ownership and children studying in Australia.

In view of the Malaysians becoming more global to travel extensively, own homes, do business and investment, and children studying abroad, this is something to be aware off. It only makes their status as residence and tax more complex.

There is a case heard of an Indian student receiving money from his parent from India was deemed taxable by ATO and given a tax bill. Knowing the attitude of certain segment of Australian public towards Asians, the same could happen to any Malaysians.

The more scary part is the indiscretion of ATO to force anyone to pay taxes and pursue them in another country. As told by an Australian, ATO is a closed government service and majority of personnels are without tertiary education.

In this case, as this blog had raised before, tax due to Malaysia could be stolen by another country at the whim and fancy of any tax commissioner to determine and not by some clearly defined and judged law.

It is a lesson to the constantly complaining Malaysians. As anything else in Malaysia, tax collection i.e. GST have become a political issue for the opposition to win influence and votes in the pursuit of power.

If they actually win on the platform to abolish taxes, especially GST and other related taxes, how are they to run government without sufficient revenue.

Strange is the Malaysian psyche that the latest political propaganda is to dispute the rationale that GST was to compensate the RM30 billion loss in oil revenue. Apparently, the GST collected of RM39 billion for 2016 is short by RM9 billion to the loss oil revenue when subtracted by 2014 SST figure of RM18 billion.

More will be collected once GST system stabilise and Husni Hanazlah-linked U costom contractor complete their 16 month over due GST system.

The local taxman is also currently aggressive in their tax collection. Malaysians could likely blame them for performing their duty by punishing the ruling party.

As a reminder, that did not deter the opposition turned ruling party of certain states to stop the course of action taken and in fact, action deemed necessary was more aggressively undertaken than that taken by the previous BN government.

For Hii's case, the Foreign Ministry need to take this issue up or more revenue meant for government could end up in the hands of foreign governments.
at 11/16/2016 01:31:00 PM


This commentary brought to mind the claims by our Chinese citizen brothers and sisters of Negara Malaysia that they were the sole payers of every single sen of the nation's income tax and no MALAYs were income tax payers!
They really do not understand that other than their money, more taxes were also collected from the corporate entities and from those 'makan gaji' Malays who were taxed at source without fail and without any chance of creating bogus amounts of taxable income and under-declaring their real income!
Talks of Malays living on the the income tax of were widespread and should be stopped.