Is there no limit to Parliamentary Privileges? 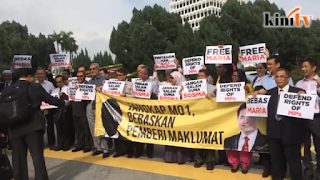 Taking up on the SOSMA detention of Maria Chin, opposition MPs marched from the parliament gate to the police headquarter with placards which also reads "Defend the MP rights." It refers to Parliamentary Privileges of MPs as enshrined in the Federal Constitution.

Subsequent to the trio's speeches, an issue was raised that they may have breached Section 8 of OSA and Section 4 (1) of Sedition Act.

Speaker Tan Sri Pandikar Amin Mulia felt the trio abused Parliamentary Privileges. Why they not fight it out when in cabinet?

There was a police report and there was investigation carried. This led to outcry from opposition.

Reactions range from call to stop the investigation, "keluar dewan" gimmick, and questioning how Speaker know the OSA material. There were calls to pursue issue instead of messenger.

On November 8th, Tun Mahathir came to Parliament for more drama with a press conference to claim Parliment is not democratic.

Yes, it is Mahathir that is talking of democrasy and free speech. Dato Shaberry Cheek suggested he look at himself in the mirror.

As for Husni, he looked ridiculous to ask questions he answered on RTM last year. It gave the impression he incompetently do not know what is happening of GLCs in his portfolio.

It is open secret that he refused to be transferred to other Ministry and had other issues. The claim Husni is champion of the people is doubted.

What is Parliamentary Privileges?

In a 2006 article in Sundaily, Professor Shad Faruqi explained the Immunity and Privileges of MPs. He wrote:


No person shall be liable to any proceedings in any court in respect of anything said or any vote given by him when taking part in any proceedings of either House of Parliament or any committee thereof: Article 63(2). 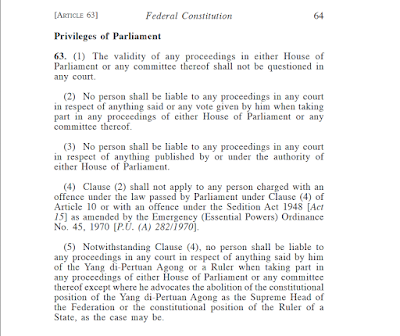 According to Veera Pandian in his column here, privileges lies with the principle of freedom of speech:


The principle of freedom of speech, often described as the most important of all privileges, dates back to the English civil wars during the 1600s when parliamentarians fought for the right to self-governance and independence from the monarchy.

After three wars, the Bill of Rights finally established the powers of parliament and became enshrined in law in 1689.

Article 9 of the Bill of Rights states that “the freedom of speech and debates or proceedings in parliament ought not to be impeached or questioned in any court or place out of Parliament”.

Is the Privileges of Parliament unlimited?


Though the privileges of MPs are quite wide, they are not limitless.

1. Ever since the constitutional amendment of 1971, proceedings in Parliament are not exempted from the law of sedition: Article 63(4). In Mark Koding v PP (1983), an MP was convicted for a parliamentary speech which was seditious in nature.

2. The immunity relates to court proceedings. But abuse by an MP of his privilege of freedom of speech can be punished as a contempt of the House. For example, if an MP misleads the House by supplying false information or does not disclose his interest in the topic on which he is speaking, that may be a ground for punishment for contempt of the House.

Publication of embargoed Bills or papers is likewise a contempt of the House.

And many more. He also added:


The validity of any proceedings in Parliament shall not be questioned in any court: Article 63(1). This means that once the existence of a privilege is established, courts will not review the exercise, use of abuse of that privilege: Case of the Sheriffs of Middlesex.

Do read Shad in full here.

His later writing has acknowledge exceptions to the privileges.

Have the privileges been abused by MPs?

Abuse means it is used in accordance to the law but not applied for the intended purpose.

An article in The Independent of UK in February 2010 pursued this issue at length and cited few cases:


Three Labour MPs, Elliot Morley, David Chaytor, Jim Devine and a Tory peer, Lord Hanningfield, have been charged with false accounting over their expenses claims. They deny the offences and are trying to avoid a criminal trial by invoking the 1689 Bill of Rights which gives force to parliamentary privilege. This is the privilege which stops MPs and peers from being sued for defamation.

The case of a Green MP:


It was the Damian Green MP affair which last brought Parliament into conflict with the law. Mr Green was arrested by the Metropolitan Police at his constituency home on 27 November 2008 on suspicion of "aiding and abetting misconduct in public office" and "conspiring to commit misconduct in a public office".

In Australia in September, ABC reported an MP abused the privilege to name names in a paedophile allegation in Parliament:

Civil libertarians say Derryn Hinch has abused his right to parliamentary privilege by naming paedophiles in his maiden speech to the Senate.

In his speech last night, the controversial new senator used the safe haven to name and shame a number of child sex offenders.

In our highly politicised environment, particularly after much relaxation for freedom of speech and media by government, Malaysian politicians rampantly abuse the law to justify their political actions.

Should the privilege be allowed for judicial review?

The Independent summarised the arguments, to the question whether the accused MPs should be allowed to use their privileges, as below:


Yes...
*Parliamentary matters are for parliament to deal with
*Questions about the limits of parliamentary privilege should be heard in public
*A defendant who is unable to fully argue his defence is denied a fair trial. It is up to the court to rule on the admissibility of a possible defence


If the issue is regulated by a Standing Order or Resolution, then the House has exclusive jurisdiction over the matter. However, judicial review will be exercised if a constitutional procedure was not followed or if the Bill was ultra vires the powers of Parliament.

But suppose the allegation is that the counting was mistaken. Can the courts examine the records?

There are also gray areas about the power of the courts to issue habeas corpus if a person is committed to prison for contempt of the House on facts which cannot reasonably be construed as contempt.


However, under two conditional clauses (4 & 5) added through amendments made after the May 13, 1969 riots, the privilege does not apply to any person charged with the Sedition Act 1948 and laws enacted under Article 10 (4) which protect the national language, the special position of the Malays and natives of Sabah and Sarawak and commenting on the position of the Yang di-Pertuan Agong and the Malay rulers.

As many of our legal experts have since pointed out, there is no mention of the OSA or oaths of secrecy involved.

If the former ministers had violated any rules, they should rightly be referred to Parliament’s Rights and Privileges Committee, chaired by the Speaker himself.

A group of lawyers echoed the same as Veera and insisted police have no ground to act under OSA.

In The Star, lawyer and columnist, Bhag Singh felt there an exception from immunity for "cases of sedition, and when they communicate ‘official secrets’ outside Parliament".


In deciding that there was no privilege granted to such a person (Lim Kit Siang v. Public Prosecutor case) to communicate such information outside Parliament, then Chief Justice Raja Azlan Shah went on to say: “Parliamentary privileges may exempt the appellant from the laws of defamation, so long as the libellous words were uttered within the walls of Parliament, but as he well knows, will not save a member from an action for damages if repeated outside the House.

“We do not consider, since it does not arise for consideration and we do not have the benefit of submissions whether any speech in Parliament revealing official secrets would be caught by the Act, but clearly the duty of the appellant as a Parliamentarian does not include the right to disclose or make available for disclosure official secret information outside the walls of the House to the public at large whatever his motive might be.”

In 2011, Dato Mukhriz said he could reveal the IPP Agreements with government but was cautioned by Tony Pua of their OSA status.

It shows MPs, particularly opposition MPs are aware OSA is applicable on MPs debating in Parliament.

The trio has intention to test the law in court. If so, allow police and AG to pursue to set a precedent.

If unsuccessful, then enforcement agencies could lay off on MPs or Parliament do a review to clarify loose ends. There was a paper presented to British Parliament to review Parliamentary Privileges. [The pdf files here.] Pandikar could emulate Britain with similar reform.

As for the affected MPs, same advise as yesterday. They should stop being crybabies, and drama kings and queens. Prepare their cases.

(27:2) a guidance and good tidings for the believers

(27:3) who establish Prayer and give Zakah, and have firm faith in the Hereafter.

(27:4) As for those who do not believe in the Hereafter, We have made their deeds SEEM attractive to them so they stumble around in perplexity.

(27:5) It is they for whom a grievous chastisement lies in store; it is they who shall be the greatest losers in the Hereafter.

(27:11) except he who has committed some wrong. But if he substitutes good in place of evil, I am Most Forgiving, Most Compassionate.

(27:14) They denied those Signs out of iniquity and arrogance although their hearts were convinced of their truth. So see how evil was the end of those mischief-makers!

We will stop pubishing your quranic and hadith verses in the commentary box. It does not serve any purpose and do not adding anything to the discussion.

It is fine with us to have no comments if it does not serve any purpose or filled with bad language and insults or it is immature comments written in chidish languages.