Dubious past and present of Datasonic 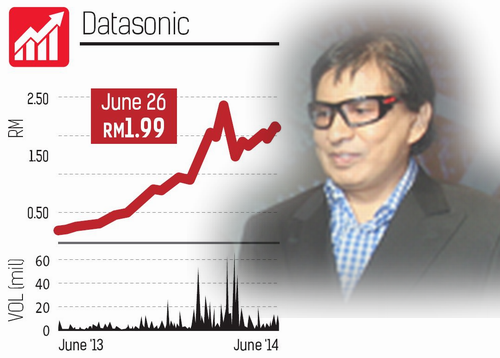 There is a message that has gone viral to remind friends to change to the new Identity Card number to enable them to get field subsidy:

The message is not true but the belief is strong that Fuelsub House Sdn Bhd and Dataonic Berhad consortium ("Datasonic consortium") will get the fuel card contract.

If the message is true, there is no need to change MyKad because their plan is issue another card for more money obviously  and Pos Malaysia is their partner to get it deliver to all "qualified" Malaysians for more money, off course.

The nature of the fuel card plan is suspect and mired with many dubious past and present relating to Datasonic and the consortium.

First of all, there is a newpaper report to deny the viral message on Harian Metro:

Didn't we say, a new fuel card will be issued?

One former GM of a card company said, MyKad can be used.

Now, we will not repeat the fact that the fuel card will only lead to widespread abuse and leakage.

Neither are we to repeat of the many dubious ways the intention to introduce the fuel card system for September 1st was unfold using scripts such as raids by KPDNKK and joint taskforce, initially hush hush, then  transparent and later private meeting, and the 70% owners of the consortium.

Nor are we to plea again for the leakage, smuggling activities and syndicate, which became became widespread few years ago due to civil servant negligence and collusion, be addressed first before instituting these measures with suspected of self serving intention.

One can read it here, here and here.

No point to plea to those with intentions to make money at public expense and are too obsess with neo-liberalism without considering the political implication to their own ruling political party. We will be the first to say "Padan muka!" should they not heed our warnings.

In a matter of time, they will pay some country bumpkins to defend their action on the social media with argument similar to defending Dato Nazir Tun Abdul Razak appointment as member of the Board of Director of Khazanah and anticipated to replace Tan Sri Azman Mokhtar is good because he is educated and CIMB made money.

We will just have to be aloof and talk to the "thinking" crowd.

Being under the weather on weekend, it enable us to do a bit of research and many dubious past and present of Datasonic was uncovered. There will be those getting unnecessarily implicated but we intend to present it as it is.

They can use their army of paid bumpkins to defend them.

Another indication that these people will get the fuel card contract it lies in a research paper by Phillips Capital Management dated May 15, 2014: 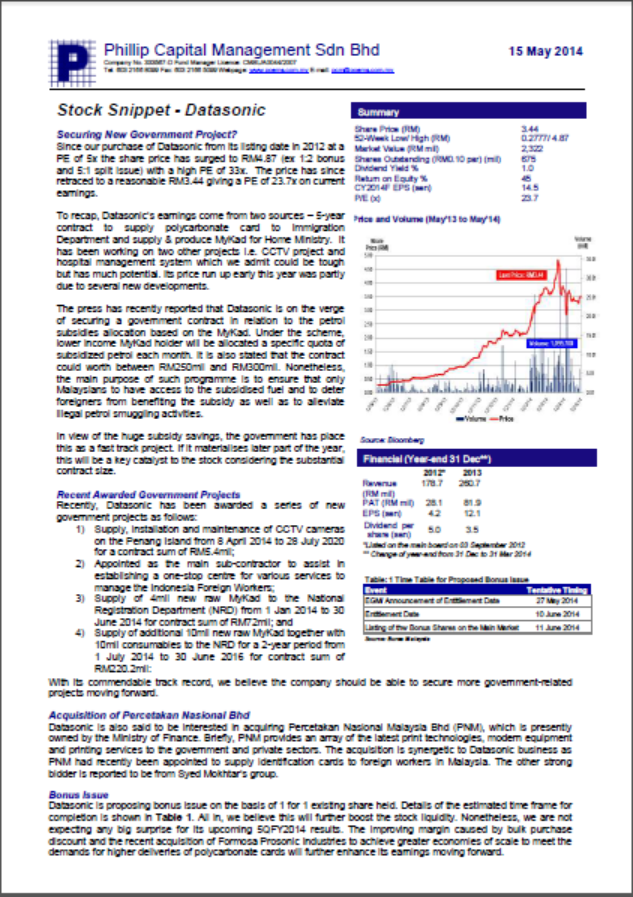 It's too small to read so we highlight the following: 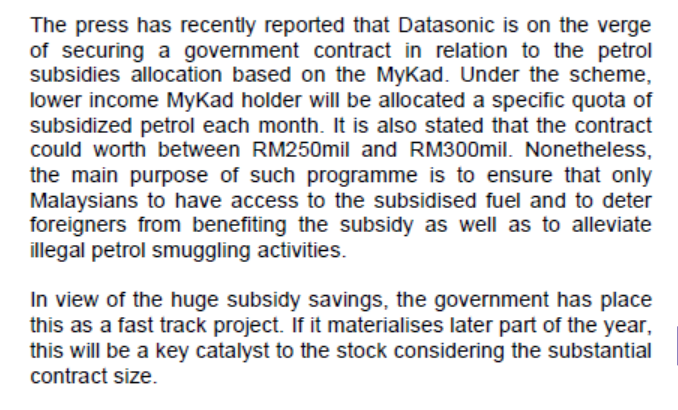 The fuel card contract will be just great to keep Datasonic stock going. The stock price had a phenomenal rise since listing in 2012 from the benefit of MyKad contract they secured by beating the original architect of MyKad, Iris Technology Berhad.

Iris thought they can win back the contract in 2014 but it was never meant to be: 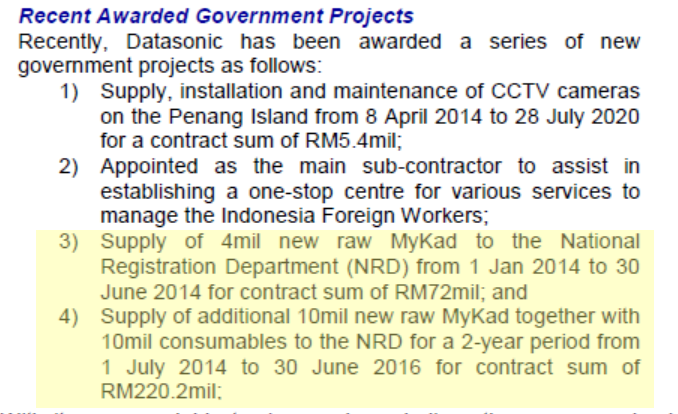 Don't tell us they have more superior management or technological capacity or whatever dog shit analyst will tell you to justify to continue buying the stock even though it has risen from below 50 sen in May 2013 to more than RM4.50 with 2014 PER above 23.

The analyst may have been tipped off. Otherwise, only idiot apek pakai terompah would buy shares with earning that takes ore than 23 years to get back money. Dividend would be longer. They recommend buy because forecasted PER for 2015 and so on is lower.

Both Enrich Epitome and Gerbang Subur acquired 65 million shares each at RM3.33 per share. Dibena Enterprise and Gerbang Subur are both linked to Datasonic’s MD, Datuk Abu Hanifah Noordin. Enrich Epitome is linked to Datasonic’s deputy MD Chew Ben Ben. After the acquisition, Abu Hanifah owns a 15.49% direct interest and a further 24.54% indirect interest in Datasonic. Chew has a 12.64% direct stake and 9.88% indirect stake in the company.

Datasonic also recently secured a RM292.2 mil contract from the Ministry of Home Affairs for the supply of MyKad. 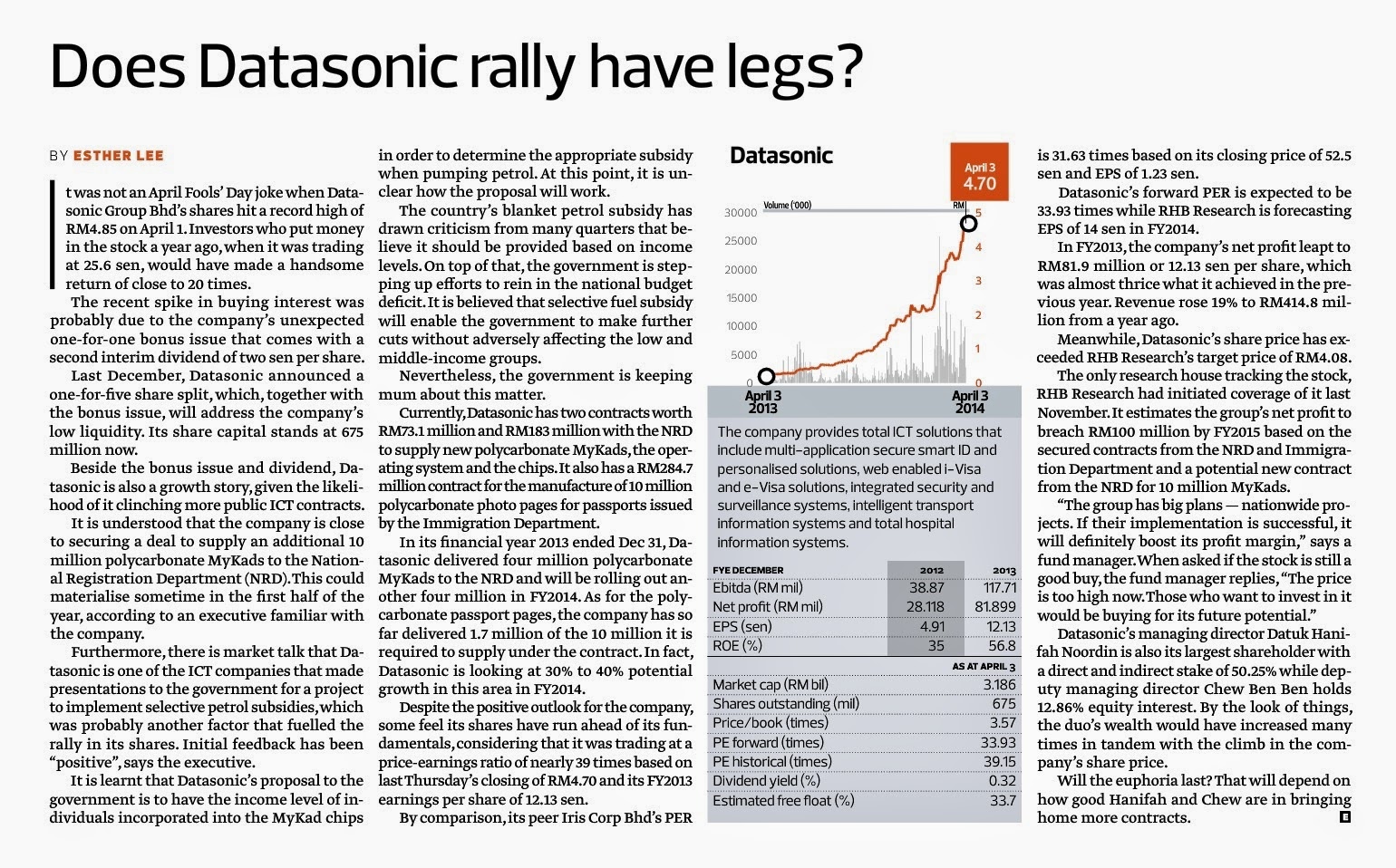 Why should Abu Hanifah sell off of a major block of his shares to Chew Ben Ben when he has just secured and is securing another major contract? And forecasted PER is cheap?

We do not have the answer but let's just see if Abu Hanifah will remain as major shareholder or a China man would take over the company after the shares spike further. 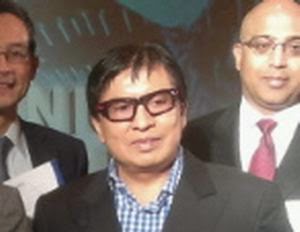 It is time now to dig up on Abu Hanifah.

His resume only tells his professional side as a public accountant. The one on the company website is too clinically clean. As businessman, why the desire to wipe out his footprints. Any businessman will have dirt, especially those capable of securing major government contracts one after another.

Was justice done? Not quite.

Such is the legal process in a corruption case, only one of the guilty parties; receiver or giver of bribe will be charged.

In this case, the equally corrupt giver, Abu Hanifah went away scot free.

A snippet of a past newspaper cutting reads:

Defence counsel to show mala fide in charge against Saidin 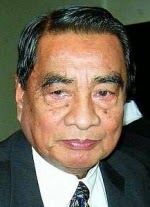 SHAH ALAM, Wed. - The corruption charge against Datuk Saidin Thamby was brought about by pressure on the Anti-Corruption Agency, the Sessions Court heard today.

Counsel Muhammad Shafee Abdullah said the defence would show why there was mala fide in the charge against the former Paya Jaras State Assemblyman.

He said this when explaining to judge Suraya Othman on the question he posed to witness Datuk Dr Abu Hanifah Noordin, who is a public accountant.

The delivery was made before the Selayang UMNO Division election. An Utusan Malaysia column in early 1998 revealed Abu Hanifah political side and there maybe some truth to Shafee Abdullah's question in court.

The politically savvy can interpret.

Abu Hanifah was carrying Dato Seri Anwar Ibrahim torch all the way to Majlis Tertinggi UMNO but lost in 1996. [Read in Nur Jazlan.net here.] That year was the year Anwar was going to topple Tun Dr Mahathir if not for his bum bashing past.

In 2009, the Shah Alam High Court acquited Saidin based on the evidence presented at the Session Court that Anwar was behind in framing him. [Read The Star here].

In the court case against Saidin, the court document here revealed below:

If Mohd Maslan is current Deputy Finance Minister, Dato Ahmad Maslan, then it shed a bad light on Datasonic. As Deputy Minister, he denied the rumours thus presumably has knowledge of this contract.

One Director of Datasonic is his friend or comrade in a certain organisation. He is Dato Aziz Jamaluddin. God forbid he is not there as proxy because he is a good man, Chairman of Masjid Kg Baru, and former BN candidate for Titiwang Parliament that lost to the late Dr Lo' Lo' Ghazali. 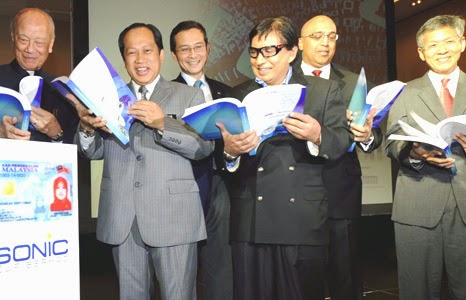 Mat Maslan was at the launch of prospectus for the listing of Datasonic in 2012. [Read in Malaysian Reserve here]

Although Mat Maslan is in Dato Najib's team these days, back in reformasi days, he was a BTN officer and used BTN photocopy machine to photostat reformasi pamphlets. The associations are there thus there must not be any mystery and suspicion of collusion in the contract.

We will tell it as it is because our consideration is not just party politics but foremost is the rakyat well being and national security.

An important question of security matter on Datasonic:


Does the company actually manufacture our MyKad? 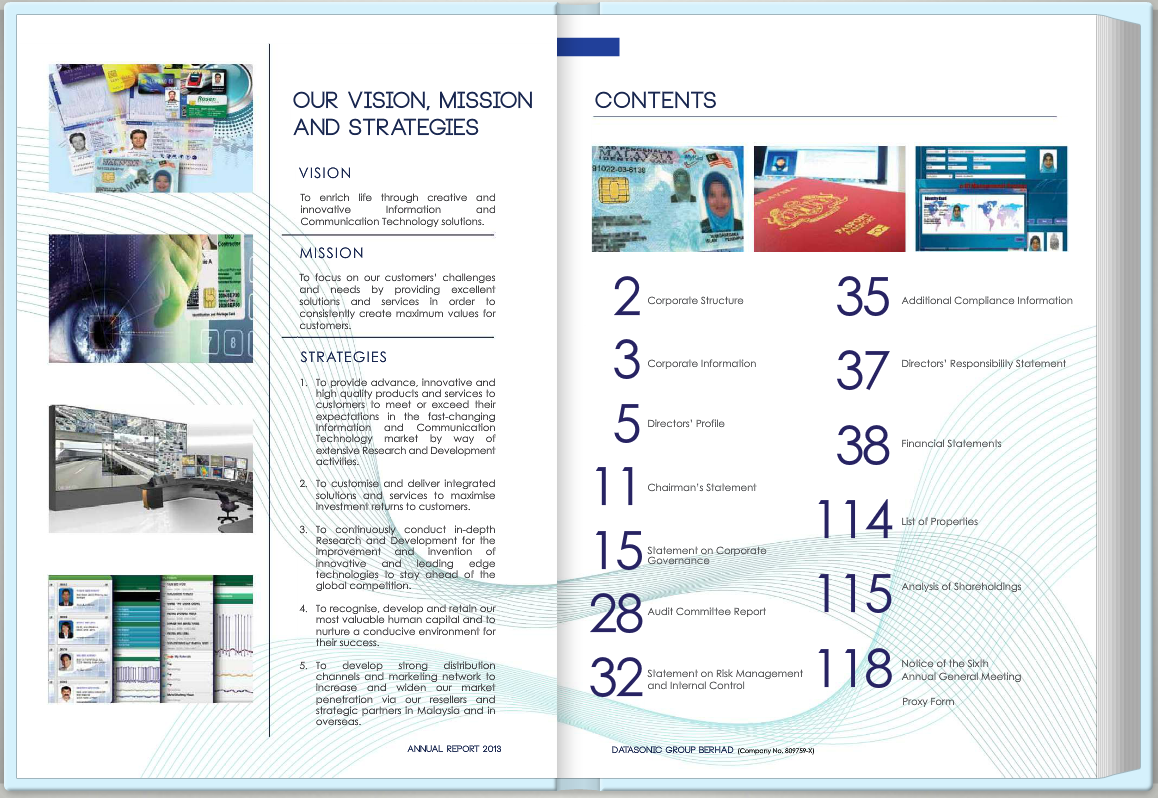 Browsing through their latest available Annual Report here, it strange that they do not attempt to show-off their manufacturing plant printing the MyKad.

The company business activities masked as strategy only state their activities are in delivering, solution and integrating, research and development, marketing and some mumbo jumbo on human resource development to make the list long.

But no manufacturing. The financial accounts and asset list hardly tells anything. 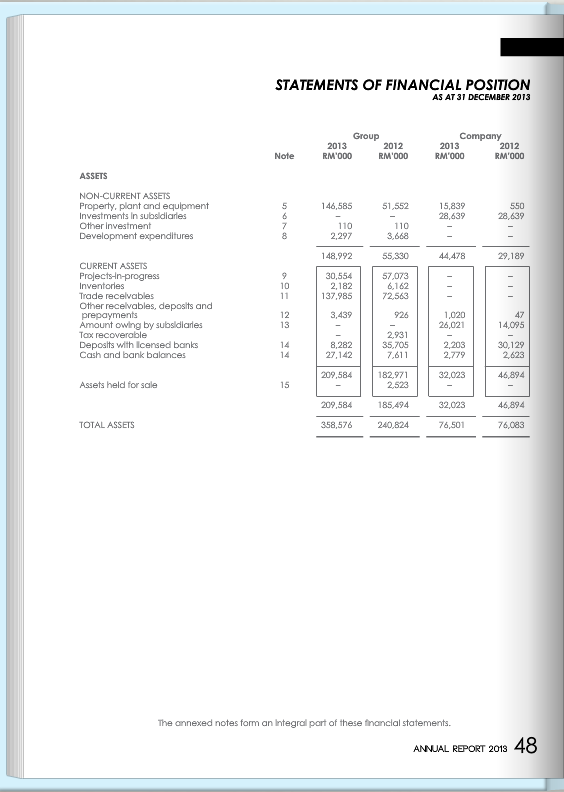 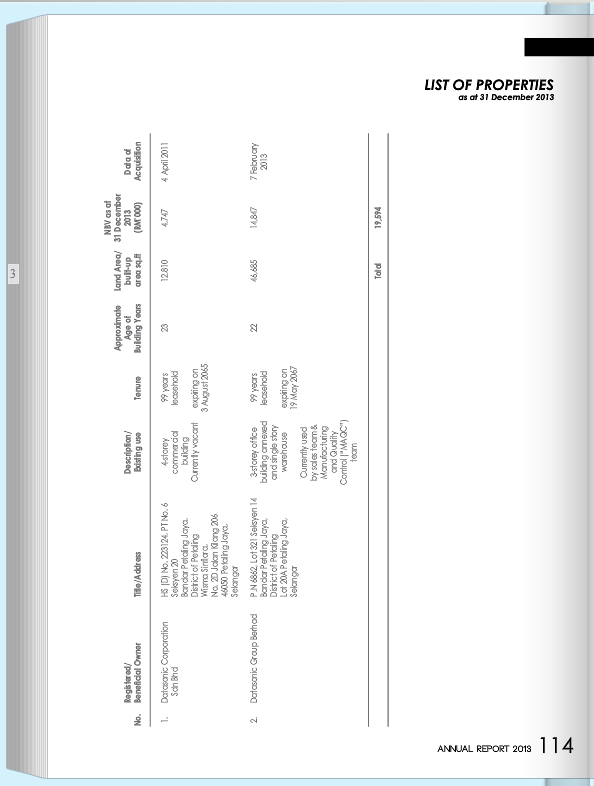 There is mention of warehouse and Manufacturing and Quality Control team but is our MyKad manufactured there?

Someone need to explain precisely, particularly the NST reporter who wrote this report here, what do they mean by:

MyKad is printed here. I had visited the factory before. The factory is just being purchased by Datasonic recently.

Quitr surprise, is it abw? What are they cookin' ? It seems the old 'dubious way' doing business. You have that circle, he has that circle and finally it owns by the same individual and their political group.

MyKad - the problem is, the chip, who is authorised to feed in the personnel details and right the access to it ? To me, it must be done by gomen and the full responsibility of our gomen. It must be professionaly controlled and no leakage whatsoever to the third party. PPN must be in full swing.

No private sectors/co. supposed to keep the MyKad details.

Mykad printing is outsourced to a Taiwanese company who prints plastic card in Port Klang. can you believe this, our national security card and details are being printed by other nationality. What is KDN/JPN doing ? How can they award a national security document to a company like Datasonic. They don't even have a manufacturing plant of their own. Did KDN/JPN visited their manufacturing plant ? I doubt it. I'm sure they must be some specific security standards that are mandatory in the tender specification. And also some ISO standards too must be complied.

Something smells here ! Very smelly ! I'm sad our national security has been compromised.