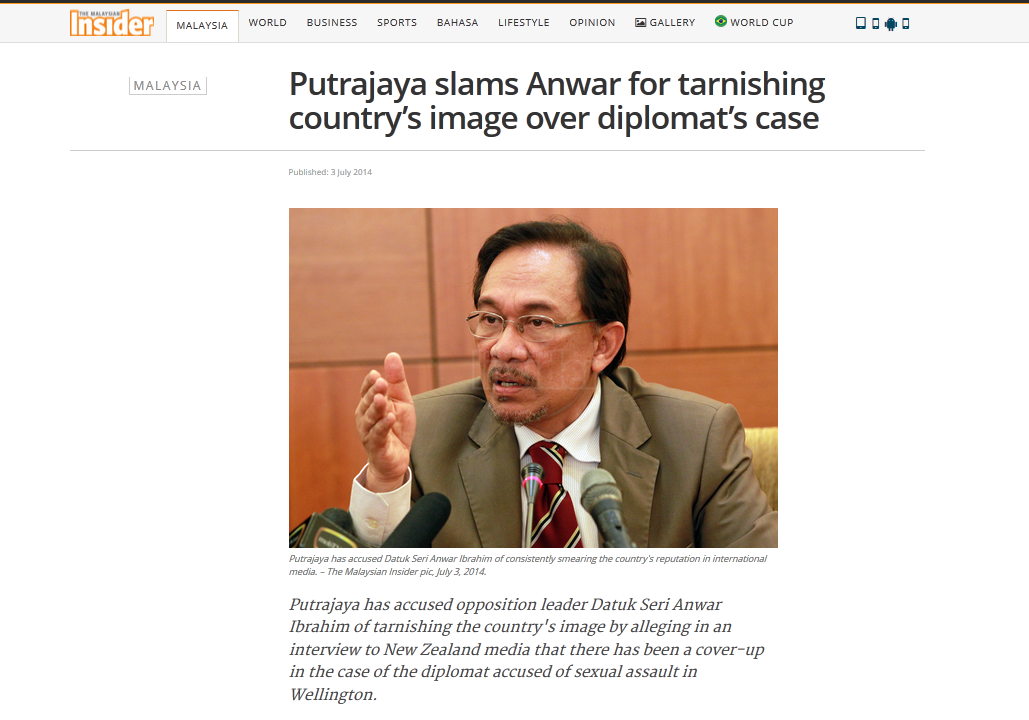 It is unprecedented but it happened.

Pro-opposition news portal, The Malaysian Insider put up a report with a heading and content criticising Dato Seri Anwar Ibrahim strongly for the unprecedented act to prematurely criticised the government handling of the Malaysian diplomat row with New Zealand.

How easy for Anwar to take the side of foreigners vis-a-vis our own country. MI quoted from Wisma Putra's statement that he attempted "to opportunistically damage Malaysia’s reputation for personal political gain".

Snippet of MI report below: 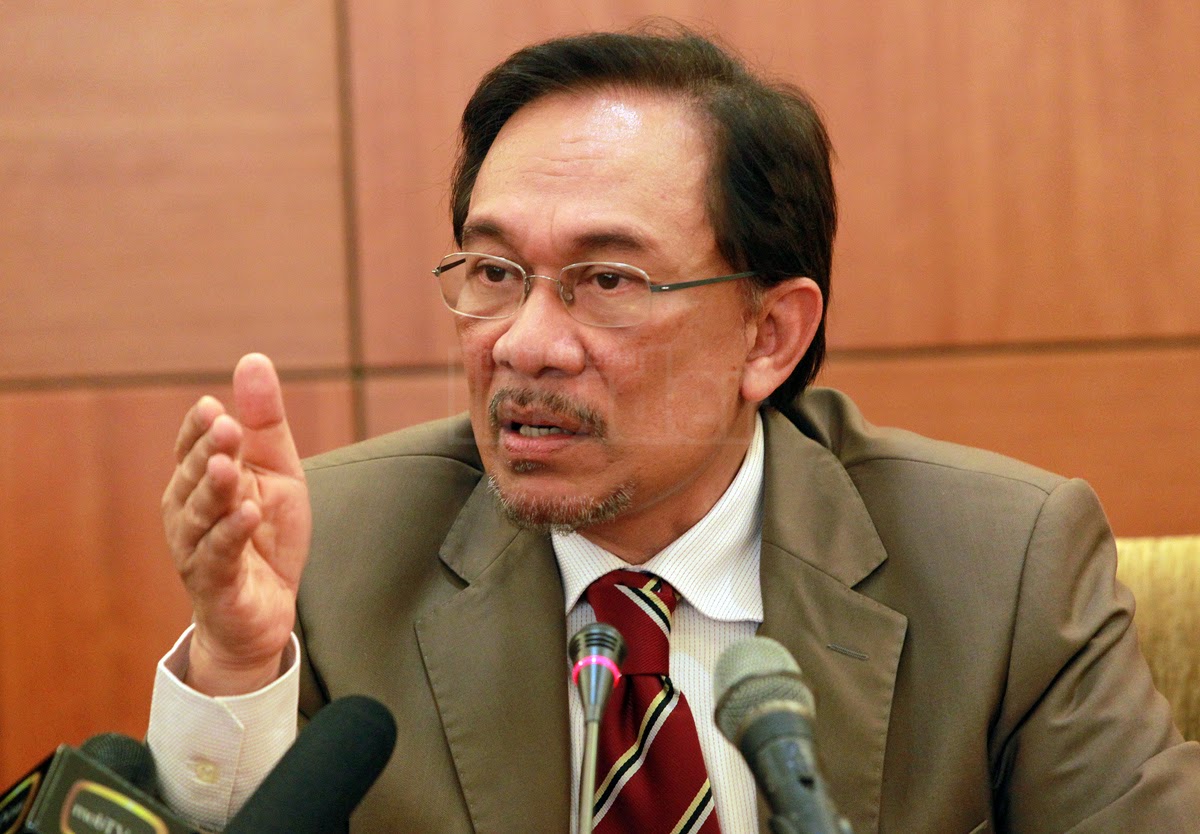 Putrajaya has accused opposition leader Datuk Seri Anwar Ibrahim of tarnishing the country's image by alleging in an interview to New Zealand media that there has been a cover-up in the case of the diplomat accused of sexual assault in Wellington.

In a statement issued last night, Putrajaya said Anwar's allegation was "completely false" and was yet another attempt "to opportunistically damage Malaysia’s reputation for personal political gain".

"Anwar also said Malaysia’s handling of the case has been 'appalling' and a 'fiasco'. This is in contrast to the position of the New Zealand government, who thanked the Malaysian government for the 'integrity with which they have approached this issue', (and) said the Malaysian side has 'acted entirely in good faith' and is 'absolutely committed to the alleged offender facing a proper judicial process'," the statement said.

"For example, during the MH370 tragedy, he implied that Malaysian officials were complicit in a terrorist act. And he alleged that the cargo manifest had been deleted or covered-up, when in fact it had been publicly released.”

The opposition leader had said that it was beyond belief that the Malaysian High Commission had requested all charges against Muhammad Rizalman Ismail be withdrawn on the grounds of diplomatic immunity.

“I am appalled that they had the audacity to suggest that an attempted rape and assault crime should be withdrawn on the basis of diplomatic immunity.”

“I know how rotten the failure of the governance here is, but I cannot imagine that we can write to a different country and request the withdrawal of these criminal charges,” he was quoted as saying on the website.

In the meantime, MI face the prospect of lawsuit for a nasty slander made against Deputy Chief Editor of Utusan Malaysia, Dato Zaini for a column lamenting on the predicament of Malay traders. [Read here]

According to The Unspinners here, he complimented the Chinese practise of mentoring:

But, reporter Hasbullah Awang Chik [read here] seemed to be instructed to viciously squash any commentary on the plight of the Malays in the Malay paper Utusan Malaysia to the point of lying and slandering. The title itself was twisting the fact:

In the article, MI fabricated a lie that Zaini's wife ran a Celcom telco shop at Alamanda, Putrajaya but failed.

In fact, the wife is has a full time job in government and he was quoting a former reporter's failed venture:

It is unprecedented for one media company to sue another media company. Seldom media publication do not embark in direct critic of the other but merely expressing their point of differing views public discourse.

If MI is serious in pursuing the truth to the point of criticising Anwar Ibrahim, surely they should be courageous enough to apologise to Zaini and Utusan for their vindictive conduct laced with lies and slander. 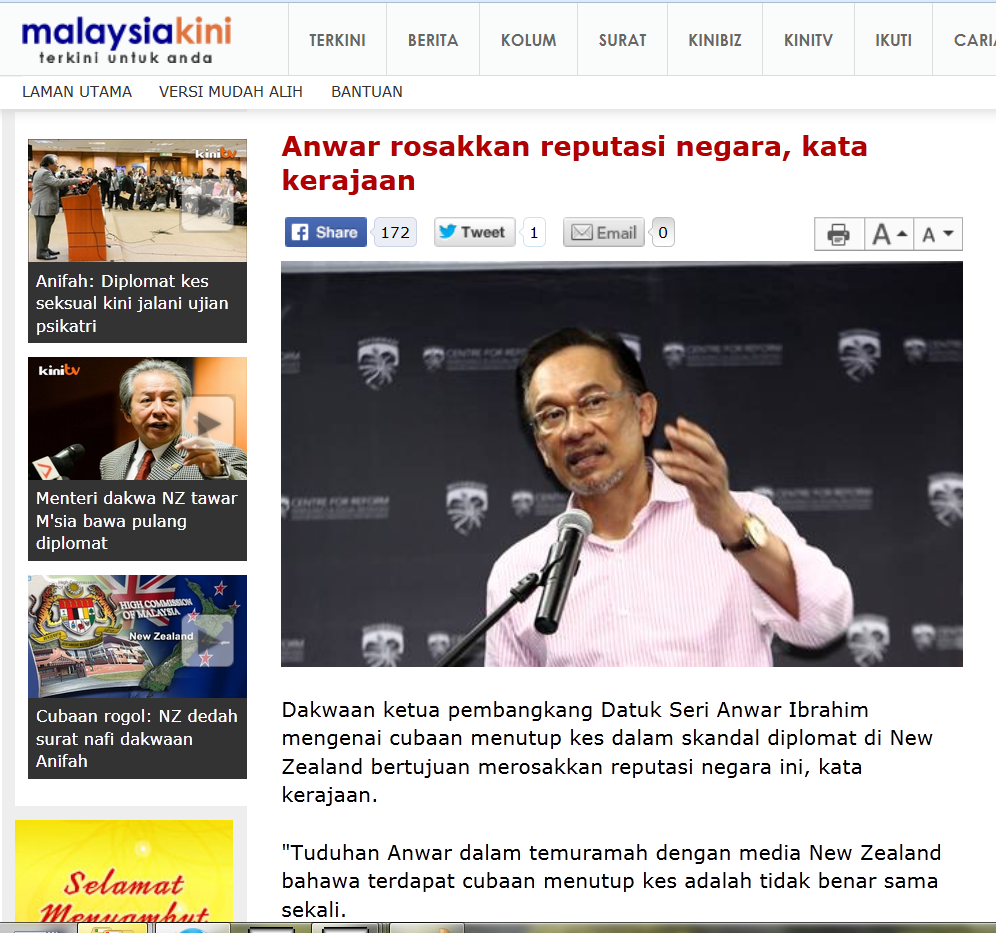 Back to the NZ diplomatic row, it is interesting that Malaysiakini did not attempt to put a spin to soften the critic of Anwar or do a counter attack in their Malay report here. Maybe the spinning is done in their English report but it is noticed that their earlier wrongful reports suddenly disappeared. 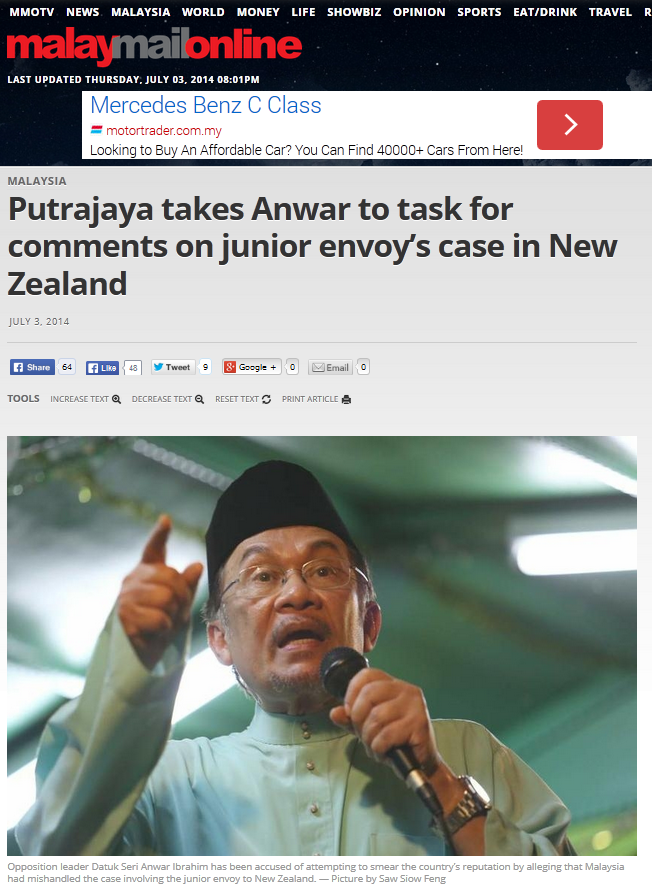 So did Leslie Lau's Malay Mail Online here although he did a cheap shot here. Can't teach a dog to behave.

Nevertheless Anwar deserve to get whacked because Wisma Putera did not buckle under pressure from the orang putih to waive their internationally accepted right to diplomatic immunity, which has far reaching implication in the practise of diplomacy.

The orang putih ended up apologising.

And, we fairly agree to allow justice for the victim to take it's course at our term with the orang putih acknowledged to say, "Malaysia ‘done right’ to return envoy in sex storm". That uolifted our image as a fair minded nation.

Problem solved within 48 hours, pride and principle intact, and done at our term without the orang putih pushing us around. Wondering whether it was Dato Anifah Aman that threatened the orang putih.

Something for Malaysian to appreciate and emulate.

On the slander on Zaini, MI took out the article but still left the nasty comments. Does Jahabar have the manhood to tell his reporter Hasbullah and MI to apologise and behave in the future?

To quote Stephen Sackur in BBC Hard Talk that made Anwar (again) look like the blithering whiner that he is, Anwar's causing "mischief" again.

Incredible how desperate for publicity the Anugerah is.

No. The Malaysian Insider is not criticising Anwar for his statements to New Zealand media.

Look closely at TMI's original article and note the phrases in quotation marks.

TMI is just reporting on Putrajaya's criticism of Anwar.

Juhubur dan Hasbullah tu melayu ke? Tak faham Bahasa Melayu atau buat-buat tak faham? I strongly urge Datuk Zaini and Utusan to sue MI and that malicious reporter to pieces. Then put the news on Utusan's front page for at least a month. If Utusan got the guts lah, I know NST didn't.