Why some Malaysians are idiot enough to fall for CNN crooked reporting? 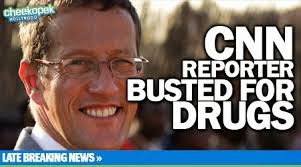 First of all, condolence to the family of the deceased affected by MH17 conveniently accused by CNN was shot down by Russian aided Russian Ukranian separatist.

After the horror and despair of undergoing the disappearance of MH370 four month ago, why MAS again?

In the MH370 incident, opposition took a week before starting their blame game on an unexplained phenomenon which puzzled the whole world.

However, it is hardly 24 hours but opposition leaders, pro-opposition portals and ridiculously over critical pro-Government blogs and social media are blaming MAS and indirectly to the government and eventually Dato Najib.

The line of argument used was why did MAS took the "war torn" route.

Logical as it is, that was the accusation used by CNN from last night and it has been repeated upteen times together with the American immediate accusation that Russian Ukranian separatist fired with a surface to air missile supplied by Russian.

Incidently, US had just announced an economic sanction against Russia for aiding the rebels. Their tone to is confrontational as they warn about tampering with evidence at the wreckage.

CNN also gave much publicity to Ukranian government statement and transcript of the conversation between two Russian millitary personnel with regard to the incident in which Ukranian claimed they managed to tap.

As openly known, US is supporting Ukraine.

Such is manner of CNN's atrocious journalism that one should take everything that was reported with kilos of salt. The American have interest and CNN report slant is obviously questionable.

Unfortunately, many loud mouth Malaysian are idiot and too quick to fall for such trap.

The first noticed to blindly agree to the wicked CNN was Free Malaysia Today [read here] as the alleged that MAS flew that route to save fuel.

If that is not stupid enough, Malaysian Insider [read here] titled their report to say MAS was flying at 300 metre above restricted air space. WTF is that?

Malaysiakini [read here and here] made same allegation by reporting the much touted mute Ketua Pemuda PAS, Suhaizan Kiat. Quite sure he does not understand aviation and took the idea from CNN's notably unconfirmed allegation. However, he sounded more credible than Dato Mahfuz Omar.

Lim Kit Siang made the same allegation by reproducing an AFP report in his blog [read here]. The report quoted only Korean Airline, and Qantas stopped using the route.

Is MAS supposed to ask the opinion of Lim Kit Siang, Suhaizan Kaiat and some wise guy bloggers and social media first before flying the route? Naturally, they rely on an authority.

If they had asked, they are likely to spin around to say MAS did not know what they are doing.

Unfortunately, some of our friends fell to the same simplistic logic to blame MAS endlessly. [read Syed Akbar here and Wee Choo Keong twitter here]. Surely we will not call them idiot.

Wondering whether they are in an over critical mode that they fail to be objective and ask themselves before believing into the conspirational CNN. One can be equally a dunggu for not asking the simple question of whether other Airlines have been using the same route within the last 24 hours.

They are accessible to ask the relevant people for information and clarification or at least to hear the other side of the story. Why did they not do so?

Too many are being judgemental and simplistically making conclusion but could not provide shread of decent argument and proof.

Only blog who answered it was The Unspinners [read here] that sensed and may have known that many other Airlines and quoted few used the same route. 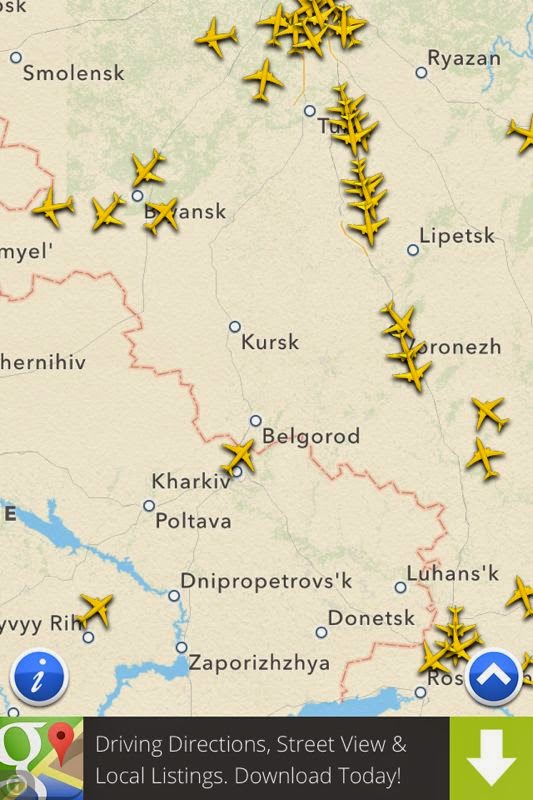 Even so, there are those insistent on claiming Malaysia still took the risk for flying over Donesk using their smartphone information. Hate to call our school buddy by any names but just smart.... Isn't Donesk merely only minutes in flight time from the nearest plane crowded area?

That map showed lots of Airlines passing through the area, isn't it?

As of early this morning, there are motives already established, endless spinning by CNN and misinformation being spread like the fake picture above. Shouldn't we be wary of any unconfirmed information? 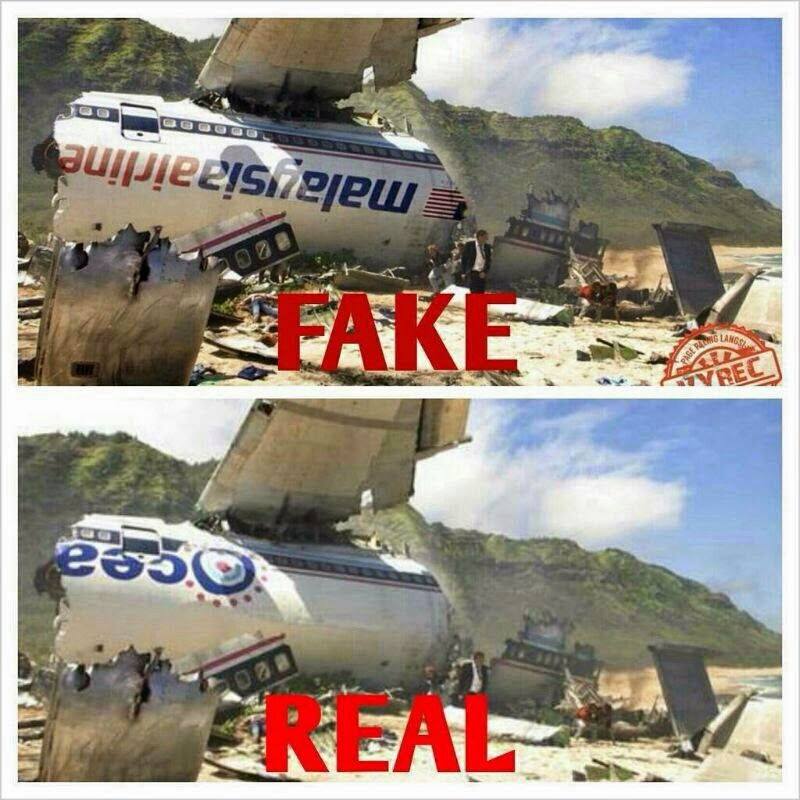 It is hardly 24 hours since the incident and yet we are already taking the side with malicious intended foreigners and making unreasonable expectation.

For sure, none of these people shooting their mouth can handle the half such a situation if they are in position to do so. Bila diusik untuk jadi Pengerusi MAS, pun tak mahu...

There will be a PC by the returning MCA Minister of Transport at 4:00 PM. Hope he is firmer against DAP, US, Russian and Ukraine than when he chicken out from doing a tic for tac against Singapore.

Dato Liow performed well as he keep focus on maintaining the same line of argument that 15 out of 16 Airlines used the same route. His official statement as taken from the Jabatan Penerangan FB here, below:

Ladies and gentlemen, I will now give a brief statement on the loss of Malaysia Airlines Flight MH17.

On behalf of the Malaysian government, and the Malaysian people, I would like to offer my deepest sympathies and condolences to the families of those who lost their lives. Our hearts go out to those who have been affected by this tragedy.

In recent hours, officials in the US and the Ukraine have indicated that Malaysia Airlines Flight MH17 was shot down. Should this be confirmed, it would contravene international law, and be an outrage against human decency.

Malaysia condemns any such action in the strongest possible terms, and calls for those responsible to be swiftly brought to justice.

Malaysia offers its full and unqualified support to the investigation. Malaysia has been formally invited to participate, and will send two senior accredited representatives to assist.

Malaysia also welcomes calls for an independent international investigation into the incident, and urges all parties to co-operate to ensure such an investigation can be completed.

It is essential that the integrity of the crash site be preserved, out of respect for the investigation and for those who have died.

Malaysia Airlines takes its responsibilities to the next of kin seriously. The airline has arranged for some 40 staff to be flown to Amsterdam, to support the families.

Earlier today, Malaysia Airlines released a list of those on board the flight and their nationalities. The list included 41 passengers whose nationality could not be verified at the time, as they were in transit from previous flights, and had not entered passport control in Amsterdam.

21 of these passengers’ nationalities have now been verified, and 20 remain to be verified. The latest breakdown of known nationalities of those on board is as follows:

Malaysia Airlines is in the process of notifying the next of kin of those on board. Once all families have been contacted, the passenger manifest will be released. In addition, Malaysia Airlines will release the cargo manifest later today.

Responsibility for releasing further information about the investigation rests with the investigating authority, which in this case is the Ukrainian National Bureau of Air Accidents and Incidents Investigation with Civil Aircraft.

15 out of 16 airlines in the Association of Asia Pacific Airlines fly this route over Ukraine. European airlines also use the same route, and traverse the same airspace. In the hours before the incident, a number of other passenger aircraft from different carriers used the same route.

There were no last minute instructions given to the pilots of MH17 to change the route of the flight.

Earlier today, Malaysia Airlines released a statement on the aircraft’s service record, which showed the aircraft had a clean bill of health. They have also confirmed that all the aircraft’s systems were functioning normally. ACARS and the aircraft’s transponders were working and transmitting as normal.

Before I take your questions, I would like to reiterate Malaysia’s condemnation of any attack on innocent civilians; its support for an independent international investigation; and most of all, its sympathies with those affected by this tragedy.

MH17 was carrying 298 passengers and crew. Our thoughts and prayers are with their families at what must be an incredibly difficult time. 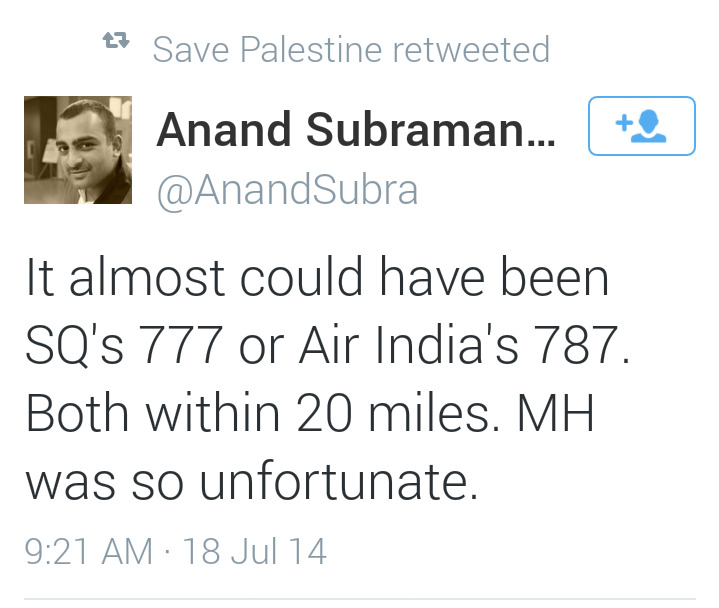 In the meanwhile, CNN cast doubt with Liow's statement without disputing the fact and continue to harp on it by inviting other so-called expertise to express merely their opinion.

These people want a war to erupt between Russia and Ukraine, and covering up the bombarding of Palestinian by Israeli. Could the American be the one shooting MAS plane above Ukraine?

What a coincidence Israel ground force attack gaza at the same time media all over the world focus at MH017.

Anyhow we got many instant Mee pilot in the internet.

Why single out the Transport Minister? He has to play the cards that he's been dealt.

And how is Malaysia going to call the US, Russia and the Ukraine to account? In the UN Security Council? In IATA? In ICAO? Or some other international forum.

Let the independent investigation commence soonest. And let the chips fall where they may.

For the families of the passengers and crew on MH17, it's going to be a period of terrible and uncomprehending grief.

But, in a sense, there is a degree of closure. There's a crash site. There's wreckage. There's human bodies to be recovered.

Why MAS, when other airlines apparently flew the same route that day?

In this instance, the Ukraine authorities will be driving the investigation. Let's see what they conclude.

''Why MAS, when other airlines apparently flew the same route that day?''

- because it had been planned. The people who did it must be very angry with M'sia and would like to ''punish'' her. They hate M'sia for supporting the Palestinians. They hate M'sia for ''judging'' one of their butchers maybe 2 weeks ago. Maybe Hitler being glorified by Bung was the last straw for them. I am not surprised if they did it or paid the rebels to do it. Anything is possible as people in that area have no morals. See now the world's attention is with MH17 and they are doing their best to annihilate the Palestinian people especially children, men, women, young and old. Bastards.

Malaysian Opposition will support any foreign military that attempts to wage war against Malaysia (touch wood) so that they can be installed as stooges.

If we go to war (touch wood) with any country, the opposition leaders must be locked up in a dungeon with their mouths shut with duct tape until the war is over.

Thanks ABITW for putting things in their proper perspectives. Even some renowned bloggers can't seem to get their heads straight!

" If that is not stupid enough, Malaysian Insider [read here] titled their report to say MAS was flying at 300 metre above restricted air space. WTF is that? "

that statement was correct at that point of time. the resticted air space was the mentioned area covering up to the height of 9700m. so, yes mh17 was flying 300m above the restricted zone since it was travesing at 10000m above sea level.

The USA. govt., QUANTAS,CATHAY PACIFIC, a SOUTH KOREA airline and etc. are careful & smart enough to order/not to use the route. MAS & and many others are not careful & smart.

You are the idiot! who call people idiots!

to be fair, Richard Quest has been on MAS side tho...