Not straight to The Hague, Anwar 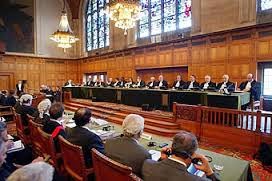 Few DAP leaders and one of their wives may have made lots of stupid statement in trying to gain political mileage and get themselves whack for being unsympathetic.

However, Dato Seri Anwar Ibrahim was just short of being a stateman with his statement showing compassion and support for the family of victims and government. [Read here and The Star here] Hopefully, he will show compassion without the pre-fix com- to Saiful.

His statement dated July 17th said so and he gave support to Dato Najib in parliament today in the debate. The idea to have a motion to unite the country is far from a stupid idea from any advisers but a necessary move in settling international dispute.

Anwar was careful as to not blame any parties in his statements. While he was on roll, he should not have tried to act smart and got his facts embarassingly wrong under the spot light of the whole world.

In his speech in Parliament this morning to support the government's motion, Anwar call upon the government to bring the matter to the the International Court of Justice in The Hague.(ICJ).

He was extending an earlier report in which he demand an international team of enquiry to investigate. Fair but the ship had left the port on it. The game could have went few steps ahead.

Government could demand compensation from the wrongful nation but that is not the way things are done at the international level.

It is similar to his sodomy case in which it has to go through the Session Court or in his case was a step up to High Court, then Court of Appeals and finally Federal Court.

To do so, he must have a significant point of law other than a conspiracy theory against Tan Sri Shafee Abdullah whch was out rightly thrown out. Thus far, case heir apparent Ram Karpal to prepare for the case and is still muttering the same futile issue on Shafee.

Dato Seri PM-in-waiting aspirant but first go to jail, Anwar should know that one does not go straight to ICJ.

As told by one lawyer aspiring to do International Law, the international court and arbitration process for international dispute resolution, it has to go through a series of arbitrations and eventually it will involve ICOA before going to ICJ.

Our salute to the unknown and selfless team of people thinking together to solve this major national problem and potential international dispute or even war. Their presence makes me proud that there are still exist such Malaysians and not those shallow thinking DAP politicians.

After ICJ, there is another final process at the ICC.

That is what we understood from the bombardment of newly heard acronyms and unfamiliar international law conventions. Surely if Malaysia were to go to ICJ straight as suggested by the Malay Studies dropout, the ICJ judges will embarrassingly tell us, "Ini bukan kes liwat lah!!!"

Wonder what will the clown but politically savvy, Dato Mahfuz Omar be making a fool of himself in Parliment today. Nevertheless, respect is due for this SRP drop-out and former bag carrier at Bayan Lepas Airport. Some say he was an air site parking attendent.

Online payday loans tend to be short term installment loans and in addition they fully developed within just 25 to help 3 months. You can create your own payment about the settlement date since decided from your take-home pay themselves. Should you be not able to, you might restore the actual bank loan. Nonetheless, you could have to pay additional rates. These kinds of costs rely entirely about the bank, thus previous to placing your signature to the actual understanding kind, make sure you verify the eye costs which the firm is asking for. You need to pay back the actual payday loans about the due date to prevent paying hefty awareness prices.text payday loans direct lenders