Non-CNN version of who shot MH 17 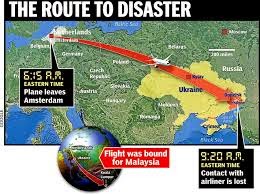 Anyone watching CNN from the night of the incident without any suspicion and pondering over the CNN motive, they would have taken the bait hook, line and sinker.

Not only they are now convinced that MAS and only MAS was negligent in thinking the L980 route across southern Ukraine, they are now suckered wholesomely to believe that the Russian-backed Ukrainian rebel soldiers were the culprit.

CNN and Western media motive to blame the Russian is too obvious to take any of their words as credible.

In a report by Malaysian Insider, Oi Eh Sun, a Malaysian at the Rajaratnam School of International Studies, Singapore is pushing on Malaysia to move away from non-aligned nation to be pro-western for an anti-Russian position.

Thus, Malaysians should not fell into the trickery and deception of these war-mongering media. Remember that unlike China, Obama hardly brought investment and business to Malaysia but only the MNC favoured TPPA.

Co-incidently, there is only one month left for the critical negotiation on TPPA. Only weeks ago, Malaysia is faced with another attack by the Sulus of Southern Phillipines. Anwar's sodomy case is due for the Federal court in early August.

Unlike MH370 incident, the opposition is not waiting for a week to attack MAS and government.

With these constraints faced, Malaysia is placed in a difficult position by the MH 17 incident as it is caught between two superpowers; US and Russia.

No nation would want to be responsible for starting a war. These days the aggressor could be the one blaming the victim. Currently, both the Western allied Ukrainian and Russian government are doing it. So Malaysia has to tread it carefully.

Russia, China and Iran are allies with each other.

While, the Ukrainian rebels are Russsians and pro-Russians. Thus, the claim that MH 17 could have been mistaken by the Ukranian rebels as Russsian President, Vladimar Putin's plane is absolutely ridiculous.

Only the second day did another report changed it to be Ukranian government that made the mistake. That is a dumb excuse because it will lead to a declaration of war.

Thus far, the Russian denied they had passed through Uranian air space. The side claiming Putin had passed thrugh failed to furnish any flight route and proof. 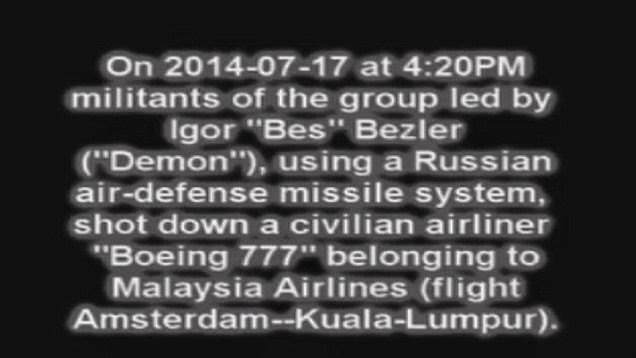 Ukraine fired the first salvo with an offical statement claiming the missile was shot by Ukranian rebels but there is no official acknowledgement by the separist movement leader, Sergev Kavtaradze.

Russia denied responsibility to the incident. The separatist movement too denied any involvement. Their reason being their missile capability is limited to within 3,000 to 4,000 feet above sea level.

They fed the international media with an official release of intercepted phone conversation transcript, pictures of vehicle carrying missiles to a certain undetermined location and proof of a fallen aircraft. However it has yet to be considered as an undisputable proof.

Ukraine. Britain. Australia. and the USA are alliance and media like CNN, Telegraf, Dailymail, Foxnews etc are pro western media. All western media reports are slanted to the west and Ukraine.

The resignation of Russian News correspondent in London could be intended to give the impression Russian are trying to suppress the truth. But is the western media giving a fair and independent report?

The pictures of fallen aircraft from Ukraine claimed shot by the separatist refers to attack by jet fighters and not missiles.

Thus far, Malaysia did not make a statement to confirm MH 17 was shot down as an official position in order not to be seen neither siding with the Ukrainian nor Russian. It is only prudent for Malaysia to not confirm the Ukranian allegation thus used the word believed to be.

Malaysia is only hearing the argument from both sides but have not been given the opportunity to verify.

International media continue to bombard Russia with all sorts of claim. Ukraine claimed the black box are found and sent to Moscow. They denounced the act as intervention. The US accused the Russian for tampering with the evidence. 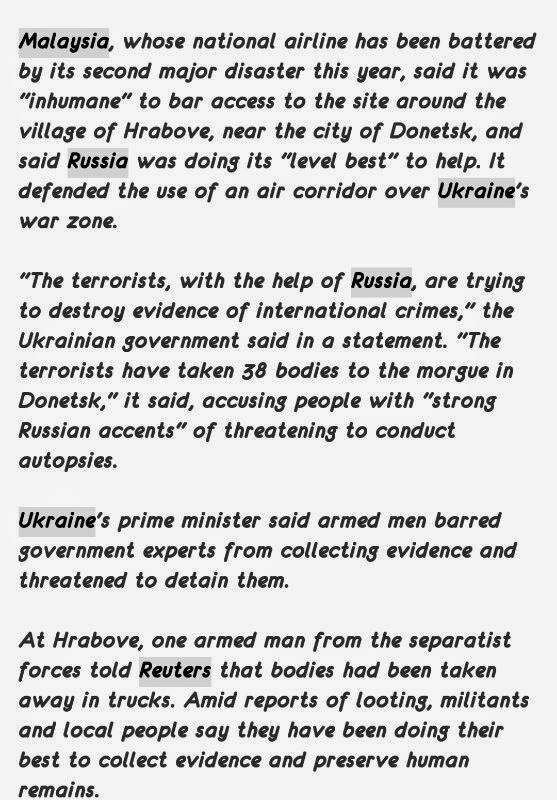 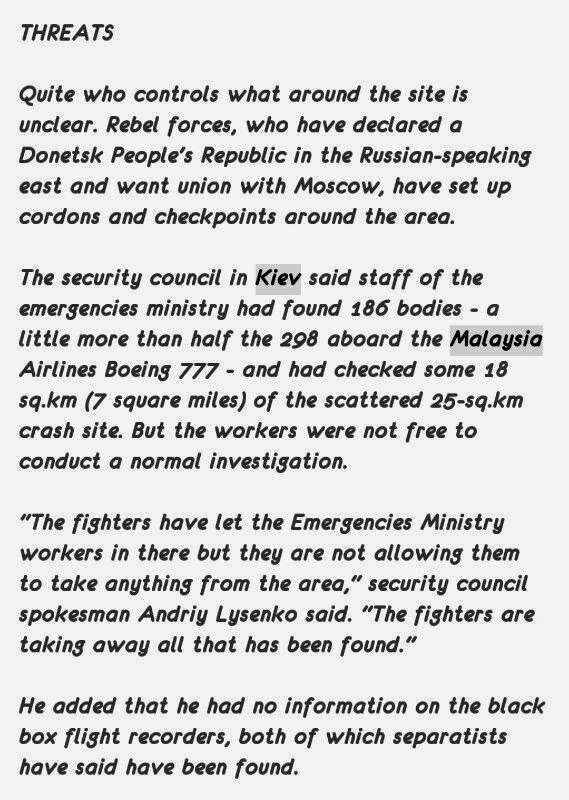 ICAO and Australia urged for investigation be led by an international team of expertise so that it is fair and transparent. .

Flight route taken by MAS is the same taken by other Airlines as determined safe by an international aviation authority and not determined by Malaysia. MAS merely takes instructions from the relevant authorities on the path and height determined.

The airspace controlled by the Ukranian separatist only ban western Airline from among others, US, and Britain but not to not aligned coountries like Malaysia. 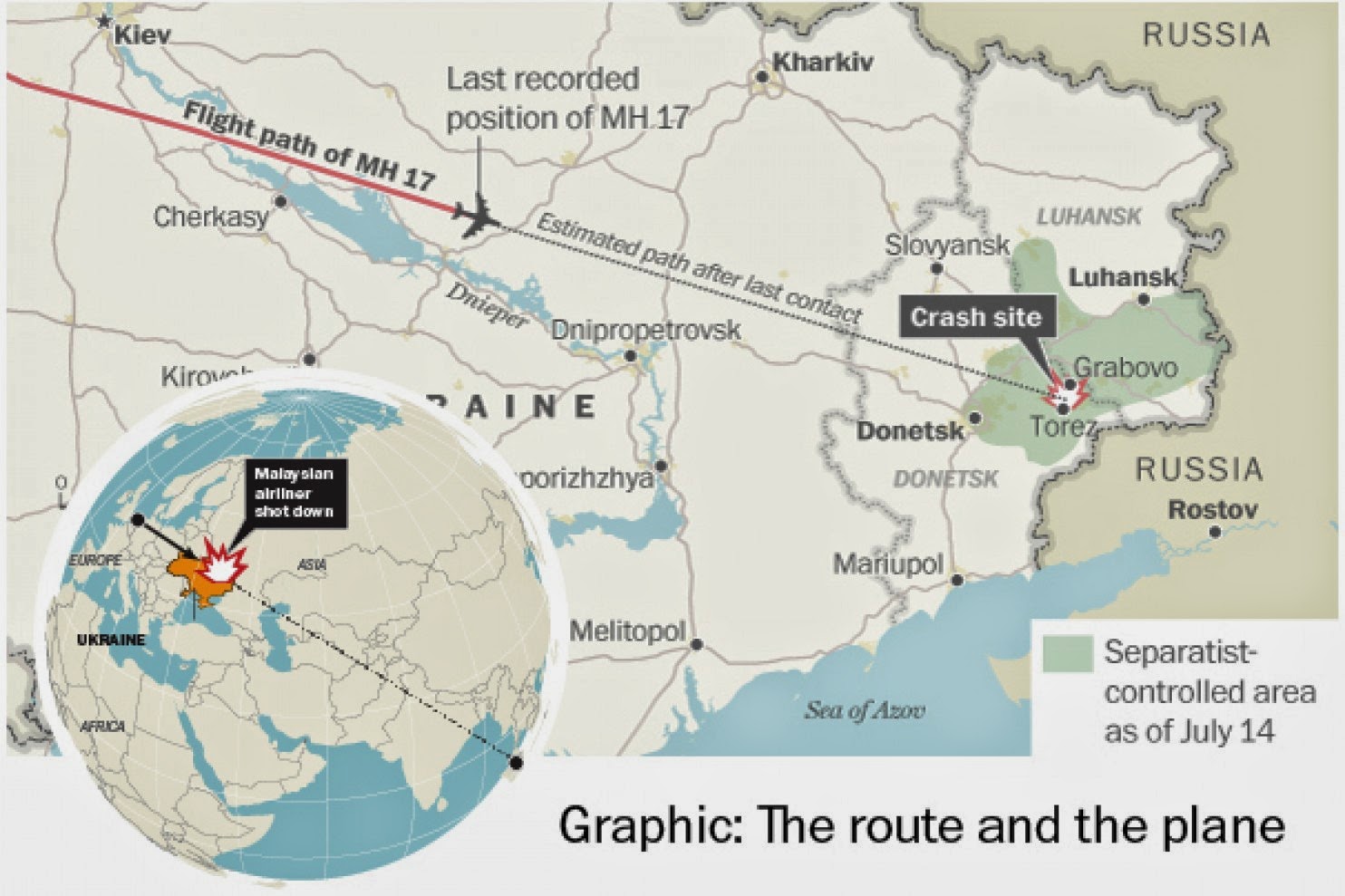 The last MH17 radar was detected was at 33,000 feet. That is the allowable height not to be considered as encroaching into the rebel airspace. There had been no emergency call made by the pilot before communication was broken.

Notice that immediately upon the incident, the whole world proclaimed that domestic conflict in the Ukraine as an international conflict. this is to justify superpower nations, primarily US and NATO  to interfere and determine the direction of the comflict.

Most Malaysian failed to realised the media manipulation done. Some of the western media reports are credible but always be wary. They could be manipulating the news report to slant in favour of their political interest with Malaysia as victim of circumstances.

Though difficult and delicate, Malaysia is taking the rigt approach to not take side with any party until the facts are known as to what had happened, and why it happened,

There is one important name that was intentionally left out by the media and is still remain silent. He is Igor Kolomoisky.

Born on February 13, 1963, Kolomoisky is a Ukrainian-Cypriot-Israeli business oligarch of Jewish descent and the current Governor of Dnipropetrovsk Oblast.

He is said to be the second richest man in Ukraine

Kolomoisky is the President of the European Council of Jewish Communities.

The billionaire governor fund his own army in Eastern Ukraine with massive weapons purchases and fascist mercenaries. Last month, Russia’s Investigative Committee had issued a resolution to indict Kolomoisky on charges of using prohibited means and methods of warfare.

The Buk missile system alleged to have been used to shoot down MH-17 is in Ukrainian stocks and has been sold by Kiev to Georgia. Media propaganda claimed Ukraine does not possess Buk system.

Donetsk Republic also says it has no missile system capable of hitting a plane at 33,000 feet. 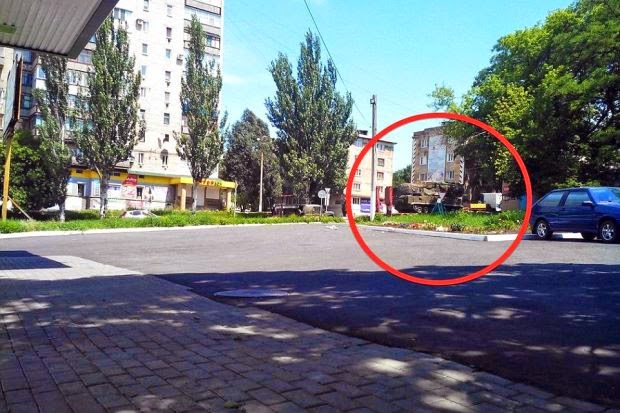 Could Kolomoisky, who takes orders from Tel Aviv, pulled this attack off to divert attention from Israel’s Gaza genocide and try to put blame on Russia?

Israel and its sayanim are masters of false flag attacks. Malaysia's MH 17 was targeted because as said by Dato Seri Anwar Ibrahim, Malaysia support Hamas and strong campaigner against the Israeli Zionist regime.

There is more possibilities and information that need to be searched and do not be deceived by taking the reports of CNN hook, line and sinker

The theory in your blog is plausible. I was thinking along the Israeli line too. Only that I didn't know that there's a rich Jewish strongman in Eastern Ukraine. The Ukrainian PM is Jewish. The Ukrainian govt consist of Fascists and Neo Nazis. There are also IDF (Israeli Defence Force) soldiers and ex soldiers in the Ukrainian side. It beats me how they can ''work'' together. I'm having an open mind as it's hard for me to believe the pro Western media. My bet is still with the Israelis for obvious reasons.

I am beginning to think that one must have limited intelligence to be able to withstand the spew of CNN.