The Star may have pre-empted the outcome of a diplomatic tussle between Malaysia and New Zealand with regard to allegation of burglary and sexual assault by a defense attacje at the Malaysian High Commission in Wellington to put the above frontpage headline. {Read here]

Perhaps Leanne Goh may have got away seditously spinning and pre-empting interfaith issues bbut not on this issue.

In the earlier posting here, it is mentioned that a decision was not decided and the Malaysian Government is still looking at the various options, including extradiiting the diplomat, Mohamed Rizalman Ismail back to New Zealand.

Essentially, Malaysia is upholding the principle that our foreign diplomat are given the rights to diplomatic immunity in any exchange of embassy or high commission. Our diplomat cannot be subjected to certain peculiar laws and be persecuted by such law in the course of their duties,

If it does not answer your curiosity, then you would understand that it would not be fair to subject foreign diplomats to our preventive laws like Sedition Act and former Internal Security Act.

Thus there was basis for Malaysia to invoke it's diplomatic immunity and seek for Rizalman return to Malaysia.

In the latest statement issued by the Foreign Ministry this afternoon, Rizalman would be sent back to New Zealand to assist investigation: 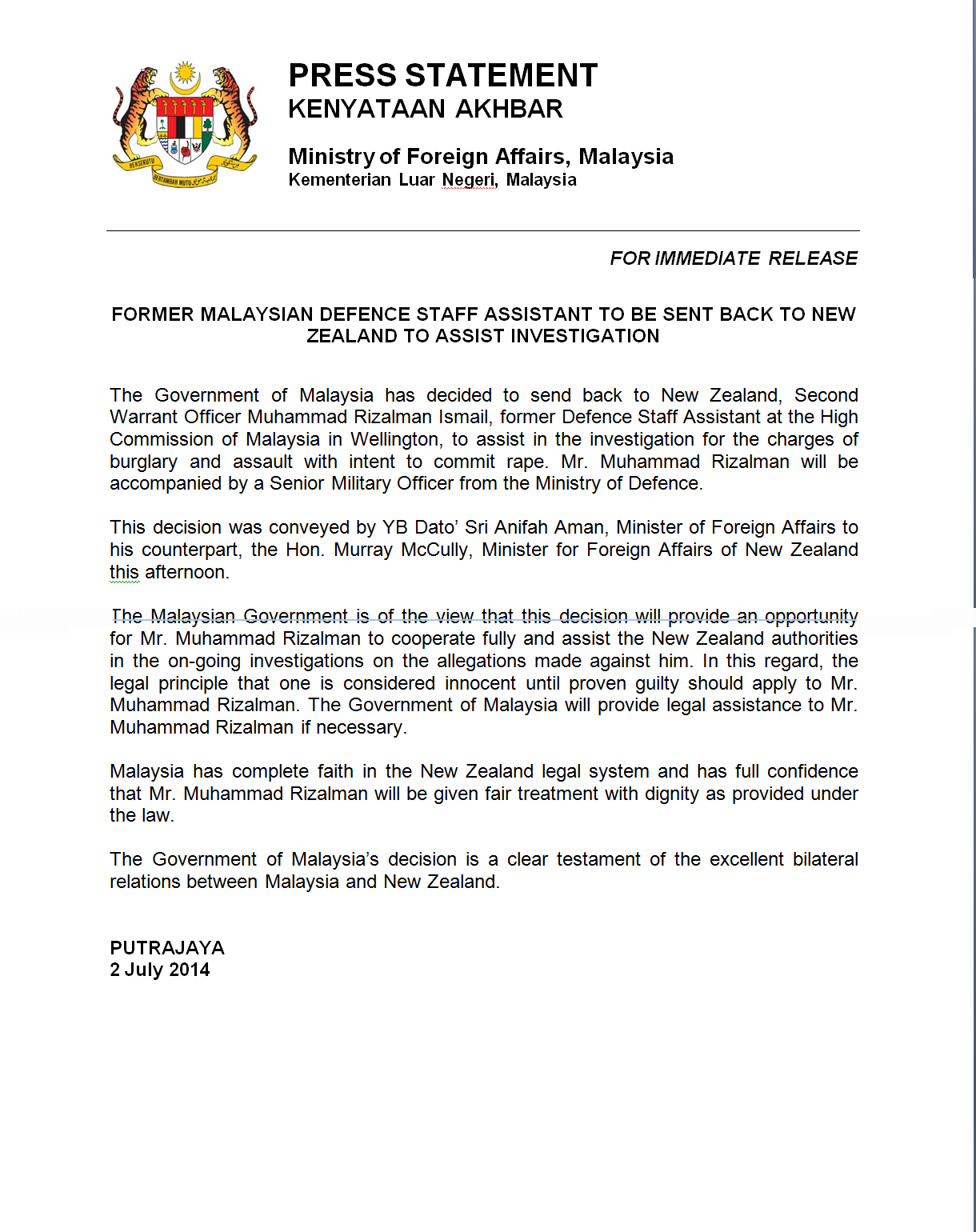 The statement does not mention of extradition but it is understood that Rizalman will be facing prosecution in the event there is sufficient evidence against him.

This position is most welcoming because diplomatic immunity should not be used to hide from proseccution for heinous crime like rape. There have been many cases in the past of diplomatic imunity abused to save the diplomats from act of crime. The Star has a report, below:

Bad apples in the diplomatic corps


PETALING JAYA: They steal, refuse to pay parking fines and taxes, drink and drive and, worse, sometimes commit murder but never spend a day behind bars.

These rogue diplomats have been waving diplomatic immunity in the face of law enforcement authorities like get-out-of-jail-free cards for decades.

One of the most heinous examples of misuse of the diplomatic tag under the 1961 Vienna Convention on Diplomatic Relations was by a Burmese ambassador to Sri Lanka in 1979 who murdered his wife and burned her body in full view of neighbours and the police.

The incident was told by Gerald Hensley, a former vice-dean of the diplomatic corps in Sri Lanka, in his memoirs.

He said the ambassador shot his wife dead at their house in Colombo for having an affair.


Neighbours who saw him preparing a funeral pyre in his backyard called the police but the ambassador told them that they could not enter his house because it was Burmese territory.

“He then carried her body out and dumped it into the fire,” Hensley said, adding that while the ambassador, who remains unidentified, was later removed from his position, no one knows what happened to him.

Another case was of an inebriated Romanian diplomat, Dr Silviu Ionescu, 49, who beat traffic lights and knocked down three men along Bukit Panjang Road in Singapore in 2009. One of the victims was Malaysian Tong Kok Wai, 30, who died three days later.

Ionescu, the man behind the wheel of his embassy’s Audi A6, later claimed that the car had been stolen. He fled to his home in Romania three days later.

However, the law did eventually catch up with Ionescu when a Romanian court sentenced him to three years’ jail last year for manslaughter in the Singapore incident. The sentence was later doubled to six years.

In April 2012, Panamanian diplomat Erick Bairnals Shcks was arrested for raping a 19-year-old Filipina in Manila but was released from detention when he claimed diplomatic immunity.

In a more bizarre case of diplomatic immunity being abused, a Mexican delegate stole the BlackBerry phones of several White House officials in 2008 during a bilateral meeting in New Orleans.

The delegate was nabbed by Secret Service personnel just as he was about to board a plane to Mexico. Although he handed over the smartphones after initially denying he stole them, he got off scot-free.

In a hotly disputed case, India’s former consul-general in New York, Devyani Khobragade, was charged with visa fraud and making false statements about a domestic helper that she employed.

Prosecutors accused her of forcing Sangeeta Richard, who acted as a housekeeper and nanny for the Khobragade family, to work 100-hour weeks for the equivalent of US$1 (RM3.20) an hour. The federal minimum wage is US$7.25 (RM23.20) an hour in the United States.

Her arrest and strip search sparked a bitter diplomatic row with New Delhi removing security barriers near the US embassy and revoking diplomats’ ID cards.

Charges against her were later dropped but in March this year, she was indicted on the same charges again and prosecutors said she would be arrested if she returned to the United States.

By agreeing to the "extradition", the Foreign Ministry managed to meet both the principle that diplomat in foreign land have rights to diplomatic immunity and honour the principle of natural justice by sending the accused Rizalman to New Zealand for investigation.

The keyword is assist investigation. If there are sufficient proofs to put him to trial, he will face charges.

The interesting aspect of this row with New Zealand is that the episode lasted hardly more than 48 hours with Malaysia able to both uphold the diplomats' rights to immunity and respect another nation's right to maintain justice.

Malaysia had not allowed the orang putih New Zealand to bully us at will but respect our rights and trust our good judgment to fair. So often tend to kow tow to orang putih and too overawed bby the slang and blonde hair to think they are better than us in situation where they are in actual fact no better.

This episode illustrates an important lesson to leaders, public servants and politicians in the need to be firm, consistent and uncompromisable in our principles. Yet it is able to find a sensible resolution to the problems within the ambit of the law and practise of good governance.

More so, it is done within the shortest of time and able to contain the issue without getting uncontrollable and evolving into other issues and problems.

first and foremost, please get it correct i.e. the guy is not a DEFENCE ATTACHE but DEFENCE STAFF ASSISTANT. very big different there, diplomatically speaking

Issue that isnt an issue... or is it on the other side of the story ?