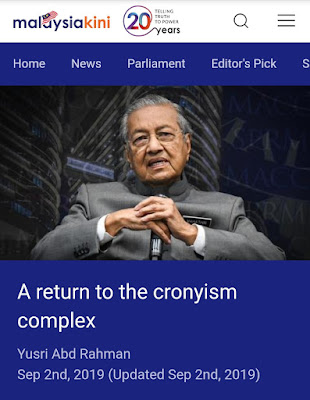 Just four days after was sworn in as Prime Minister, Opcom Cables was awarded an RM11.16 million contract by Telekom Malaysia.

Mokhzani Mahathir was the chairperson and CEO of Opcom Cables at that time and his brother, Mukhriz (Opcom’s co-founder), was the largest shareholder until he turned his shares over to his wife before entering politics.

A few months later, a letter of appointment that addressed Petron Fuel International Bhd as one of the fuel suppliers for government vehicles went viral on social media.

Another of Mahathir’s sons, Mirzan, is a director of Philippine-based Petron Corporation, which owns Petron Malaysia.

In a letter that went viral in 2018 by a Sebastian Loh, he warned that Mahathir’s cronyism is far worse than Najib’s corruption. I would argue that Najib’s corruption could not have existed if not for Mahathir.

After all it was opposition (now Mahathir ally) leader Lim Kit Siang who stated that, that it was during the former's 22-year tenure as prime minister that Malaysia first began to “rot,” thanks to corruption and rampant power abuse.

He pointed out that it was Mahathir who had “single-handedly destroyed the independence, impartiality and professionalism not only of the judiciary, but also of other important national institutions like the police, the Election Commission, the anti-corruption agency, and the civil service”.

During Mahathir’s first tenure as prime minister, he had commissioned three main Umno officials to focus their attention to build “bumiputera capitalists”.

The three were Mahathir himself, Daim Zainuddin (who was finance minister during two phases of Mahathir’s term) and Anwar Ibrahim, who, before his downfall in September 1998, was second in power after Mahathir. All three had their respective corporate connections.

Their creations included the privatisation of public services included multi-billion projects such as the North-South Highway, water and sewerage, the Bakun Dam, Light Rail Transit System and the National Train Service (KTM).

The benefits of these schemes evaded the average Malaysian – the only beneficiaries being companies that were linked to favoured.

These companies were also often given bailouts and “preferred financing” when they invariably failed. One simply has to look at the sordid state of our infrastructure to see what at the compromised institutional design and regulatory enforcement of the Mahathir-era was given Malaysia.

Judging from recent developments, it was wishful thinking to even consider that Mahathir’s return to office would be anything different.

Some truths still remain – the closer an individual is to Mahathir, economic prosperity is almost sure to follow. It is no secret that Mahathir generously spreads the wealth around his close circle and friends. After all, companies linked to his family often secures GLC tenders, better financing, government bailouts and more.

Indeed his “stepsons”, Economic Affairs Minister Mohamed Azmin Ali and Youth Minister Syed Saddiq Syed Abdul Rahman have been handsomely rewarded both in terms of position and in political security.

After all, it was Mahathir who proved to be Azmin’s most powerful defender when the latter was confronted with a homosexual video scandal earlier this year.

This is on top of his appointment in the Economic Ministry, which now oversees many of Malaysia’s most powerful GLCs (where Azmin also serves on the boards of directors).

Take a clean good look at how Syed Saddiq successfully lobbied for Gojek, a foreign company to operate in the country – despite statements by Transport Minister Anthony Loke that motorcycle ridesharing was unsuitable for the country.

In fact, it seems that even in the aftermath of this announcement, Loke will still play second fiddle to Syed Saddiq, as it was later announced that the regulatory guidelines for motorcycle ride-sharing will be co-authored by the Transport Ministry and the Youth and Sports Ministry.

The greatest tragedy of all is that for the average Malaysia it is not the presence of corruption that is the problem – but it is the way that Mahathir uses corruption to advance his own agenda and expand his influence.

Let’s not kid ourselves, there can be no Malaysia Baru without a renewed commitment by Pakatan Harapan towards the ideals of egalitarianism and transparency.

I fear so long that as long as Mahathir still remains, we may never see it.

Comb through with a critical and analytical eye without any presumption and prejudice of all the news, announcements, documents, accounts.

Corruption, cronyism, nepotisn and outright swindeling is happening at a hasty speed in anticipation of a PH government fall.

Every known personalities in the limelight around Mahathir to assist in bringing down Najib are at crippled cockroach pace to make hay while sunshine.

More so the unknown ones.