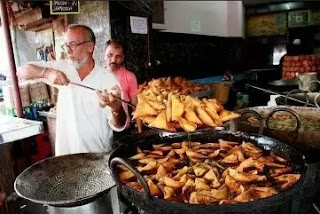 They go into restructuring schemes, which these days are described in fancy financial jargons and newly coined terms.

For the man-on-the-street businessmen, they are merely doing cutback on expenditure and business activities, and doing asset selling and loan repayment at the worst of timing.

For years, the management of MAS fell into this predictable cycle till their capacity is reduced and the company is as good now as "jual kati".

None of the highly paid executive was thinking. A kacang putih seller would have done better.

Guess when Amhari, who went into a RM20 billion settlement negotiation without claiming to know nothing of IPIC deal and merely carrying files, was once paid RM75,000 per month, it confirms their thinking.

The least he could do was to give a better lie. No roadside nasi lemak seller or hokkien mee hawker would have said si.

One can be sophisticated but the basic remain the same. This story of this samosa seller in facing up to a recession is self explanatory.

Banwarilal was a samosa seller in an Indian town. He used to sell 500 samosas everyday on a cart in his locality. People liked his samosas for last 30 years, because he cared for hygiene in preparation and selling, would use good quality oil and other ingredients, provide free chutneys with samosas.

Banwari earned good reputation and enough money from samosa selling and he never faced downfall in his sale in last 30 years. He was able to fund his son's MBA education in a famous private college in Noida out of his earnings.

Recently his son Rohit completed his MBA and came back home as he could not get appropriate placement. Rohit started taking interest in his father's samosa business. He had not been involved in his father's business earlier as he considered that to be an inferior job.

During MBA, Rohit read a lot on recession. He read that it is coming up in global economy and how it will affect job prospects, increase unemployment etc. So he thought that he should advise his father of the risks in the business of samosa selling on account of recession.

He told his father that recession may cause fall in sale of samosas, so he should prepare for cost cutting to maintain the profit.

Banwari was glad that his son knows so much about business and taking interest in his business. He agreed to follow advice of his son.

Next day, Rohit suggested using 20% used cooking oil and 80% fresh. People did not notice the change in the  taste and 500 samosas were sold.

Rohit was motivated by the profit made by this savings. Next day he suggested  increased share of used oil to 30% and reduce the quantity of free chutney.

Rohit told his father that recession has really set in as predicted by him, so more cost cutting is to be done and they would not throw stale samosas but would fry them again next day and sell them. Quantity of used oil will also be increased to 40% and to make only 400 samosas to avoid wastage.

Next day 400 samosas were sold but customers were not feeling good old taste. But Rohit told his father about savings because of his smart planning. Father told him that he may be knowing better, being educated.

Next day Rohit decided to use 50% used oil, do away with sweet chutney and provided only green chutney, made 400 samosas. That day only 300 samosas could be sold as people started disliking the taste.

Rohit told Banwari, "Look, I had predicted great recession is arriving and sales would fall. Now this is happening. We will not throw away these 100 stale samosas but would fry and sell them tomorrow."

Father agreed to his MBA son.

Next day, 200 fresh samosas were made with 50% used oil, 100 stale fried samosa were offered for sale but only 200 could be sold as people sensed the drastic fall in quality.

Rohit said that recession has really set in and now people have no money left to spend so they should make only 100 samosas and recycle 100 stale samosas and stop giving paper napkins .

After this only 50 samosas could be sold .

Rohit told his father " Now recession has taken people in its grip. People have lost income. So, this business will be in loss and they should stop selling samosas and do something else."

Now his father started shouting, "I did not know that they teach cheating in the name of MBA. I lost my money in getting your MBA education. In last 30 years of samosa selling, I never had recession but your greed for profit brought recession in my business and caused closure. Get out of my business and I will get it back to earlier level. If you want, I can hire you for washing dishes as that is the only thing you can do despite being MBA educated."

Thereafter , Banwari started following his age old wisdom and fair practices in business. Within a month his sale reached to 600 samosas.

Recession is nothing but convergence of greed of government to extract more taxes, greed of big businesses to be more profitable by reducing quality and using unfair practices and also of careless arrogant employees giving pathetic service as long as profits are coming.

Recession is the punishment given to businesses and government by people by restricting their spending.

There is a lesson for Dr Muhammad Khalid and even Ahmad Faris Rabidin. the two persistent pesterer calling and selling the names of PM and CEP chairman to GLC heads.

If they are not rewarding friends such as the new PNB CEO for their own selfish purpose, they should look out for real talents to lead GLCs.

Get their mindset out from the stubbornness for their claimed macroanalysis is a one solution fit all or cockiness for know-it-all solution in two minutes..

Get to the basic of business and the GLCs can turnaround.

Maybe Mahathir should replace the two with those truly capable to be economic and business turnaround strategist.

You deserve a genuine Malaysian backalley MBA for your keen analysis.