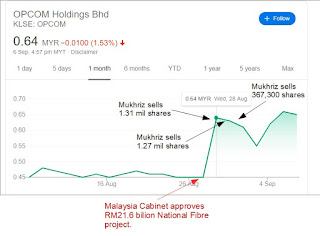 All done at and near the peak after shares spiked up upon the announcement on National Fiberisation and Connectivity Plan spending for RM21.6 billion.

Minister of Finance and mainstream media together with Malaysia had suspiciously collaborated to create the false impression government is spending such amount.

Security Commision should investigate and remained equally unbiased as they did on Mukhriz's close fried, Dato Norhamzah of Kosmo Technology Berhad.

More so should the share price not drop back. 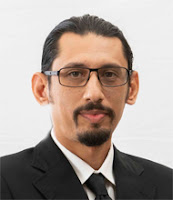 It is a test on blogger SatDee of Pure Shiite or Ahmad Faris Rabidin.

He is on the Board of SC, and should prove he is true to his writings on the matter of integrity, corporate governance, and transparency.

He is in the inner and social circle of Tun Dr Mahathir and Tun Daim. And, he is also a member of the Board of Directors of Petronas.

Can he prove himself to be able to carry out his responsibility without fear or favour?

And can he prove his and PM's Press Secretary, Endie Shazlie @ Jebat Must Die vociferous outburst againt previous BN government was not due to anger after being denied an overly priced and unnecessary political consulting work agreed in principle by Dato Najib but not hired by the concerned party?

it seems that mukhriz knew something abt the state of the govt that we all dont, i.e perhaps the earlier than expected collapse of current ph govt? that's probably why he must take as much money as possible then RUN. he wont be able to pull this off if the govt changed