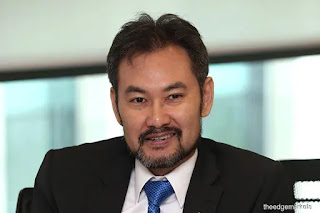 Amhari behave in such manner to save his neck from the Orb Solution Sdn Bhd investigation by MACC. But Shahrol is determined to see Dato Najib behind bars. His testimony is expected to be the longest because he was there from the beginning at TIA.

It will be a while before Shafee could cross-examine him. Hope he had done investigation and found out about rumours Shahrol has a Swiss account. All the rest collaborating with Jho Low in 1MDB and SRC benefitted.

Arrogance is usually a facade put up to hide guilt and insecurity. Having met Shahrol in 2011, his ways came off as beyond confident, but arrogant!

Shahrol was formerly from Accenture doing system or consulting. He has never done a single property development before, but was making claims the TRX development will be something ground breaking never done before.

Not to mention calling all local banks as bank kampong when he himself has never done any credit assessment all his life. 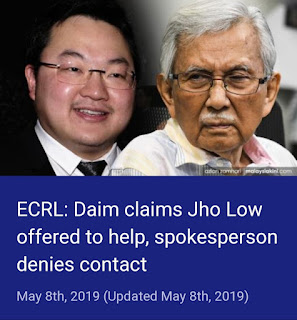 Longer list of Jho Low's collaborators have disappeared. Naturally, Jho Low is high on the wanted men list. If many parties confidently said he is in China, why is he not brought back?

Jho Low will be the star witness for both SRC and 1MDB-Tanore cases, but Tun Dr Mahathir may not want him back. It is the popular belief that it will be established that Jho Low is the guilty party and Najib will be exonerated. To quote P Ramlee's movie, Labu Labi, "Don't drop my waterface!"

Never do that to Mahathir. Even if he dies, his ghost will rise to revenge his shame.

Tun Daim hinted Jho Low was in China and said he tried to help on the ECRL negotiation. Daim said he refused any attempt by Jho Low to negotiate his refugee status and told him to return to face the law. Though this blog claimed government could not extradite because China wants a tic-for-tac exchange with MBI International Dato Teddy Teow, Daim's statement is interesting..

Teow happen to be an acquintance of Dato. Hamzah Zainuddin. Extraditing him could land Lim Guan Eng in trouble. So it is no deal.

However, it raise suspicion of a possible collaboration between Jho Low and Daim in a one for you and one for me arrangement. Interestingly, Jho Low's father had long been viral on social media as being close with Mahathir and his company won few major infra projects.

It is possible that Mahathir and Daim said one way, but do the other way. Maybe OBOR, now BRI is Jho Low's next 1MDB-like target, and he helped smoothen negotiation with China.

Dato Hamid Bador said government will be extraditing Jho Low in a matter of days. The former illustrious SB officer could be deceptive, but he is not when he was so cocksure. Something may have happened beyond our eyes. 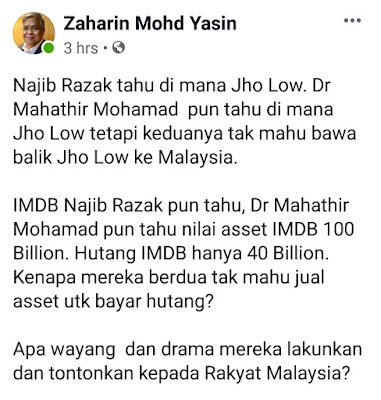 The 1MDB case is more than meets the media report and sensational headline of Sarawak Report. Media Social writer, Zaharin Md Yassin should not be too cocksure too. Perhaps he was merely trying to draw information.

Now that it is revealed 1MDB is the idea of Tuanku Mizan, it need be clarified that there was no plan to turn TIA into a LBO investment company but a genuine initiative for the state's long term welfare program.

This blog wrote repeatedly that Jho Low came into the scene and was brought in by his highness's brother-in-law, or shall it be more appropriate to refer as brother-out-law, Dato Osman Tahir to be Adviser.

Najib was not in the picture. By the time, he was to be PM, Jho Low tried to get his way into Najib's sphere like all ants sensing sugar.

Najib have been extensively misquoted to say, "I did not know Jho Low ...". Its been long to remember the original source. However, UMNO side failed to response effectively. 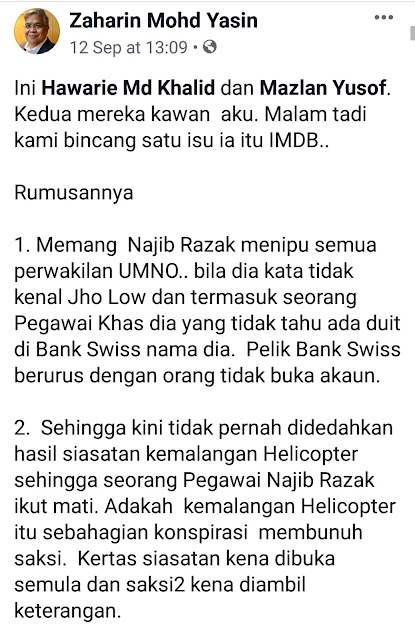 Again referring to Zaharin, there are still UMNO supporters that fell for the then opposition ploy till today.

Najib effectively said he did not know because Jho Low only knew Najib's stepson, Riza Aziz. Only then did he worked his way to know Ashman and finally managed to get to meet Najib.

However, to claim he called the shot and could order his way around, it is a different ball of wax. The prosecution's witnesses at SRC could make claims but not substantiate with any proof or witnesses. Will it be the same with the 1MDB case? 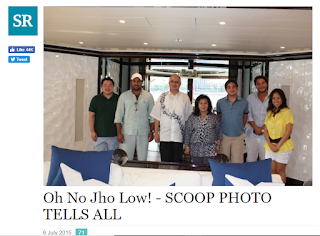 One argument of the then opposition that still fail to be dispelled by UMNO supporters was the boat trip. In fact, this was the picture that made some UMNO supporters simplistically assumed Najib as kantoi for denying knowledge of Jho Low.

It is the presumption of the "Whale book" co-author and former WSJ journalist, Tom Wright that without Najib, there is no Jho Low. The prosecution in the 1MDB-Tanore trial will try to establish that and Shahrol will be the next hope of prosecution to pin it on Najib.

Many have tried in the SRC case but failed under cross-examination.

This expose dated July 6th 2015 by SR's Clare Rewcastle Brown implicated a PMO officer, Dato Wan Shihab as the person who took the picture and emailed to Tariq Obaid. It is known that Petrosaudi data was stolen by Xavier Justo and Raja Petra exposed that Mahathir's officer Sufi Yusof have been going up and down to Thailand to meet him.

It is known later that Mahathir met Clare in London and contrary to this blog's denial then, Sufi may have managed to get these pictures paid to Xavier for Clare's use. To be fair to Sufi, the WA group transcript of Clare, Xavier and another person sighted claimed Sufi did not immediately responded.

Clare spin in her posting that after the meet on the yatch, the Petrosaudi deal was accelerated. The prosecution will need to proof that in court. If Prince Turki is part of the prosecution witness, it should be good for truth and justice.

She also claimed Jho Low arranged for the family meet. It will mean Jho Low talked to Najib directly. It would be premature to assume. An important point to note, the tea get-to-gather was held on Prince Turki's yatch and on his invitation.

Najib's holiday on a yatch in the south of France could be at the invite of someone. But it was not Jho Low's Equinimity superyatch.

Jho Low's role is widely believed to be Adviser to many Middle East royals. Even if he had communicated to Najib on the holiday trip, Clare's presumption on the deal accelerated is just a sensational two and two story.

It is similar to the PPBM exco that accused Isham Jalil as corrupted, and now he and Kelab Che Det will get sued.

Its merely putting two and two. Amhari had a bungalow and borrowed money from Jho Low to get his second. Is it logical to assume higher grade, Isham to have two bungalows?