Tuan Ibrahim reminded we must find that strength through our faith. It is because of faith that brought us together.

For a long time, Muslims have been split and quite often, it is over petty matter. It was Allah's will that brought our hearts together.

Iman was the common ground.

Sincerity to unite, sincerity to reach consensus, and ultimately, sincerity to Allah made the joining possible. It was the pleasure of Allah that brought our hearts together.

Tuan Ibrahim begin his sermon to remind the congregation of hijrah and its significance to #HPU to begin the journey to unite our hearts.

The prophet made the hijrah to Medina and the main thrusts of his early actions was to build a Masjid, build relationship among Muslims and with non-Muslims, established a market to build economic strength, strengthen politics and millitary.

Prophet Muhammad faced challenges from worried Jewish economic lords in Medina who instigated the Muslims with sensational allegations, created doubts and split the Aus and Khazraj by reminding them of the bitter past war between them.

There is similarity with current happening in Malaysia. Tuan Ibrahim Muhammad reminded the congregation that to build is difficult and take time. To destroy, is easy and can happen in a short time.

Prophet Muhammad met the Yahudi and Nasrani to talk. He seek upon them to talk on matter of common interest (perkara sama antara kami dan kamu). Common interest enable unity be reached. To disunite, all one need is to highlight the differences.

Somewhere in the sermon he reminded there are other races and faith. Their interest and welfare is equally our responsibility. 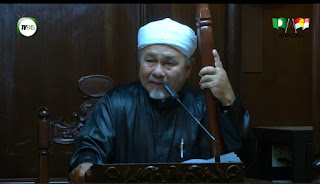 Impress on commonality than differences.

He reiterated faith or aqeedah as foundation of the unity by reminding the congregation to not pluralise Allah and idolise God's creature as there is no foregiveness for the sin of syirik.

The success of this unity lies with building relation with Allah by giving time to Allah for Allah will give attention to us. Do not miss prayers, read Quran, and regularly perform ibadah sunat.

Tuan Ibrahim impressed on political, governmental, and community leaders to carry out their duties and responsibilities with honesty and integrity.

Youth must be pious, proud of Islam, and not feel ashame or despised and sad. They are noble in the eye of Allah. Take care of their diary and not allow it to be wasted.

Continue the struggle as their time will come to takeover leadership.

In the struggle for the cause we shall embark on, refrain from maksiat (sin). One will be compromised when the enemy commit maksiat and you are involved in maksiat too. Allah will not be with us and the pleasure (rahmat) of Allah will be denied from us.

All of us had sin and all of us had sin upon each other. Let us forget the past and move on. We have no more time. We need to correct the wrong and rebuild ourselves and the country.

Tuan Ibrahim delivered a political speech last night at PWTC. His speech, together with that of Dato Mohamed Hasan, Dato Ismail Sabri and Ustaz Dr Idris Ahmad can be found HERE.