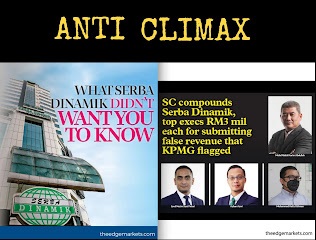 The Edge Online reported on Thursday that SC came to a settlement to merely impose compound for alleged accounting fraud by Serba Dinamik. It is truly anti-climax ending to the many months of investigation and expose by Edge.

In their March 28th to April 3rd issue, they dedicated the frontpage for Serba Dinamik with a fullspread article inside with a provoking title: "What Serba Dinamik didn't want you to know".

One would guess there is development on the SC case against Serbadk. Edge was pushing on SC to stick to their guns and prepping the public on the upcoming case.

Generally Edge summarised their one year fight against Serbadk's alleged fraudulent accounting till successfully managed got SC to charge them. Those following the issue and in the market have heard it before except the following excerpt:

The EY Consulting report, in a nutshell, questions why Serba Dinamik was in possession of company stamps — both of its vendors and those of national oil major Petronas, other oil majors, and of the company’s many suppliers.

Read the rest of "Serba Dinamik in the spotlight" here or the hard copy issue below: 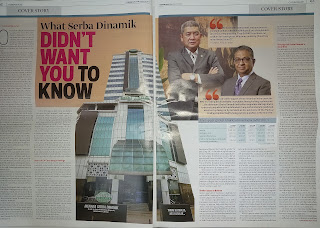 Then came the bummer as per Edge Online report on Wednesday, below:

KUALA LUMPUR (April 13): Serba Dinamik Holdings Bhd and four top executives have been compounded RM3 million each by the Securities Commission Malaysia (SC) for submitting a false statement involving a revenue of RM6.01 billion for its financial period ended Dec 31, 2020 (FY20), which was previously red-flagged by the company's external auditor, KPMG. 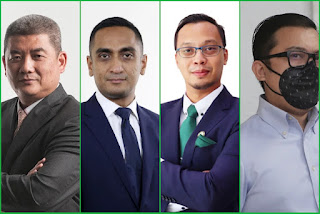 The compounds settled the criminal charges they face for submitting a false statement of the RM6.01 billion revenue for FY20 to Bursa Malaysia Securities Bhd on Feb 26, 2021.

Muhammad Hafiz was also compounded an additional RM1 million for falsifying the accounting records of Serba Dinamik's subsidiary, the SC said in a statement.

The compounds follow the public prosecutor's decision to accept the representation made to the Attorney General's Chambers by Serba Dinamik and the individuals involved regarding the charges pending in court, the SC said. A representation letter is typically sent either to reduce a charge or have the charges dropped.

The compounds were issued under Section 373(1) of the Capital Markets and Services Act (CMSA) with written consent of the public prosecutor.

"This (RM3 million) is the maximum amount of compound permissible under Section 369(a)(B) of the CMSA for submission of false information in the company's financial statement," the SC said.

For perspective, Mohd Abdul Karim's CEO and directorship in Serba Dinamik entitled him to a RM4.96 million remuneration package in the 18 months ended June 30, 2021, comprising salary, fees and other emoluments, while Syed Nazim took home RM1.23 million, according to the company's latest annual report.

Section 369(a)(B) of the CMSA stipulates that a person who, with the intent to deceive, makes or furnishes any false or misleading statement or report to the commission, a stock exchange, a derivatives exchange or an approved clearing house relating to the affairs of a listed corporation, commits an offence.

The issue with the FY20 revenue was first raised by KPMG to the Serba Dinamik board in May 2021. At the time, KPMG also flagged Serba Dinamik’s sales transactions, trade receivables and payables, material on site balances, as well as how it was unable to verify the counterparties involved.

Following the revelation, KPMG refused to resign off on the FY20 accounts as Serba Dinamik’s external auditor, which resulted in Serba Dinamik suing KPMG for alleged negligence and for breaching its contractual and statutory duties as the external auditor. This led KPMG to resign from its post, citing the lawsuit hindred its ability to continue to discharge its duties as the company's auditor.

However, Serba Dinamik then sued Bursa for acting “in excess of power” when instructing that the SIR be conducted. It also sued EY Consulting to restrain the latter from making its findings or opinions on the company public.

While the SC’s criminal charges against Serba Dinamik have now been settled with the compounds, Serba Dinamik is still facing Bursa in court, after the latter filed a civil suit against the group for failing to comply with its directive to release the factual finding update (FFU) of the SIR by EY Consulting. The High Court had ruled in Bursa's favour to compel Serba Dinamik to reveal the findings, a ruling which Serba Dinamik has failed to obtain leave from the Court of Appeal on Monday to stay, while it appeals the High Court's decision. 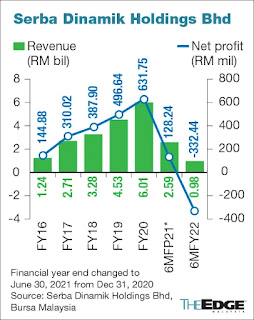 Meanwhile, it is understood that the SC is considering bringing proceedings to bar the four individuals charged from being directors of the company.

It has been almost six months since the shares of Serba Dinamik were first suspended from trading on Oct 22, 2021. The counter last settled at 35 sen – down 78.26% since the audit issue first came to light – giving the oil and gas engineering group a market capitalisation of RM1.3 billion.

The frustation on the part of The Edge can certainly be appreciated. So close to finally say gotcha on Serbadk, but slipped away with merely compounds.

One can accuse SC official of being on payroll or claim higher hands intervene. For that matter, accuse it on Prime Minister Ismail Sabri who happenned to make a recent trip last month to Kuching.

Without anything confirmed and revealed in court, all is mere conversation.

To add to the frustration, compound as penalty to any offenses is part and parcel of the reality of law enforcement. Its perfectly legit.

When both side agree to settle with a compound, it saves both sides the trial and tribulation of the lengthy and costly court process.

These days of tight government spending and law enforcement budget significantly slashed since the last few years of Najib administration will see more cases settled out of court with compound. The government could not afford to go through the process and the wait. Parking meter running to warehouse evidences.

This rumour of a compound settlement was heard at the time of writing the Petronas Carigali-Deleum remand orders on the reported eight, later nine executives suspected of corruption.

Upon realising there could be more than meets the media report, a source tipped off that behind Deleum are powerful and influential people in the league of Tun Dr Mahathir or not surprisingly himself.

It is all a show with the nine to get away with compound and it is paid for. The suspicion came about because Deleum is back in business with Petronas despite announcement of suspension few months earlier.

The media reported those being remanded are in the age of 35 to 45. The Serbabk executives compounded are in similar age group.

One market observer noticed the practise of fake accounts by the new generation of top executive among Gen Y or millenial are rampant.

These new generation of executives are so blatant in their self serving attitude for quick buck schemes for themselves. They are disinterested in business building or developing the organisation they are attached to.

For every other large bond issue by government or major corporation particularly GLC, it is not a surprise someone getting kickbacks or commission channeled intricately through layered fund transfer.

This is the generation of university students surveyed by MACC many years ago which found significant majority are willing to accept bribes.

Such executives are widespread among PLCs, and within auditors, shareholders activist groups, GLCs, and authorities such as Bursa and SC. The fear of having their cover blown detered SC from being difficult on Tan Sri Azam Baki in the share purchase debacle.

Coupled with strange going-ons, political vengence, incomplete investigation, witholding fact by prosecution, and selective prosecution in the cases against Najib and Zahid Hamidi, it became the motivation of this blog to take an anti-establishment stance and raise questions in favour of Serbadk.

The whole establishment and media seemed one sided to make a feast of Serbadk thus making it more thrilling and motivated to champion an underdog.

Nevertheless, in the last posting on the Serbadk affair, this blog made it clear that the trouble issues will only be relevant on condition of a favourable outcome of EY finding on KPMG audit.

Being right or wrong is important, but not as important as knowing the truth. The same reason for the variation from the normal stance of respecting court judgement to still question SRC judgement by Court of Appeal.

Unfortunate for SC, they could not claim victory or righteousness. And to the comfort of this blog, it is not proven totally wrong. Since the Serbadk case is not out in the open, truth will be beyond public grasp and remain mere hearsay.

The Edge final story does not constitute finality or truth on the issue. There are still unanswered questions and rumours to verify, but this blog is moving on.

It is left to those still concerned for truth and justice on this issue to prive and investigate further into this decision to settle and make it known publicly.

Otherwise it is only conversation.

It's not a surprising outcome. Given the Malaysian bolih manifesto/spirit one can understand the reluctance of the SC and the AGC to pursue the case further. Afterall it's no good for business. It seems that the SC, MACC, AGC are all having skeletons in their closet at the highest level as reported thus far. Compromising at the expenses of truth and the netizens is the way forward. Even the judiciary is now being accused of taking "money". So are we going to be surprised when the unlikely outcome leads the way.