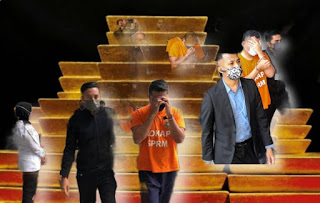 Media sensationalised an MACC remand of 8 individuals last Friday to investigate on a GLC contract worth RM2.3 billion by headlining the seizure of 10 luxury cars, gold bars, jewelleries, watches, and handbags worth RM3 million.

For a contract of such size, there seemed to be an attempt to keep the identity under lid. Sources were trying to keep the matter hush hush. That only invited curiosity and more priving that it did not take long to know the GLC is Petronas Carigali.

Sabahkini2 broke the identity here citing the remanded are senior official in Petronas Carigali and company owner. The Star report mentioned those in "senior positions in their respective companies - a chief executive officer, chief operating officer, executive officer, a director and an owner of a company." Borneo Post reported two are from Sarawak.

Petronas finally admitted and explained the arrested is a junior executive i.e. not from the senior management. For a junior able to collude with the contractor, it means the claimed corruption free procurement system at Petronas failed.

Rumours of contract manipulation heard for decades is probably true then. It made Petronas CEO warning against corrupt practices made end of November last year a fake.

Junior executive decision?
It is unfathomable for Petronas whose senior management once pride themselves as having a full proof graft free, tight and professional procurement procedure.

Its too good to be true but they claimed it is so confidential that senior management not in the know and could not intervene. Those involved in the tender selection could not know the identity of the applicants till the winner is decided.

It is not believable for a junior officer to decide on a RM2.3 billion contract. Not only management of Carigali would be expected to be involved, Petronas top management is likely to have a say.

It means they have been lying in their briefings to NGOs, media, businesses, and special interest groups. They actually could intervene in the tender and contract award process.

Another giveaway is Petronas claimed they have been cooperating with MACC since 2012. That could mean they have been seeking to resolve either problems in their tender process or clean up the names of Petronas from being smeared.

It was reported in media that the RM2.3 billion maintainance contract is through 2017 and 2021. It could be contract for Sabah and Sarawak

In the November 2021 Edge report here, it was mentioned, below:

... Petronas Carigali Sdn Bhd execs were implicated in a civil suit that was initiated by a unit of upstream oil and gas firm Deleum Bhd in December 2020.

The suit was filed over an alleged scheme to defraud Petronas Carigali in relation to multiple of its maintenance and services contracts with a Deleum’s 60%-owned unit Deleum Primera Sdn Bhd.

Its a safe bet to say this must involve a deal between Petronas Carigali and Deleum Bhd. From a civil suit it has evolved into a criminal investigation.

Deleum Primera sued four of the executive for RM20 million. And a countersuit made in December 2020 revealed the management of Deleum were aware of the kickback to be paid to Petronas Carigali. The company condoned such practices!

There have been judgement against the sued parties and they are appealing at the Court of Appeal. The matter is a legal cobweb.

It was reported MACC been interviewing suspects and doing money trail involving Petronas Carigali and Deleum.

A contentious issue was raised by this Facebooker here. Petronas announced suspension of all dealings with Deleum to only award them long term contracts few months later.

In March last year, Deleum issued a statement to Bursa, to quote below:

“Pursuant to the above and in accordance with Petronas’ License General Conditions, Petronas has decided to suspend Deleum Primera’s licence for all Standardised Work and Equipment Categories (SWEC) for future tender and/or any new award with effect from the date of the letter until further notice."

“By reason of the compound, there will be no prosecution. Deleum intends that Primera accept the offer and make payment of RM1 million.”

Criminal investigation was underway but suddenly changed route to be merely a RM1 million compound. Thats peanuts for such a company!

To display their influence, Deleum seek two weeks to consider the arrangement to pay.

So much for the announced suspension because by October last year, another subsidary, Deleum Oilfield Services was awarded two contract extentions!

Recently, Deleum got an Indian with experience from Haliburton to be CEO. He announced a new chapter for the company with a clean slate and it is rehabilitated. Thus, is the arrest for real or mere wayang?

There could be more than meets the eye. Something was amiss. If MACC reportedly started questioning in April last year and civil suit began earlier, why the remand only now?

The accounts exhibited strange or out of the ordinary characteristics for a highly profitable and regular dividend paying company. Will elaborate in the future if necessary.

It begs the question who is Deleum or more precisely, who is behind the faces of Deleum? Is there powerful people behind the company despite the facade of a Malaysian Indian controlled PLC?

Are the four being sued and eight remanded for investigation fallguys to cover the real culprit? And the whole exercise to justify Deleum return and continue secure Petronas contracts?

On the matter about contract awards, I believe the situation should be looked in two different folds. Primera and Deleum Oilfield are 2 different subsidiaries with different management team, different business and hold different licences. In case you don't already know, contracts are awarded according to licences. If Primera's licences are suspended, it has nothing to do with Deleum Oilfield and vice-versa.
I just think you have to do more research to get the whole picture right to structure your arguments properly.