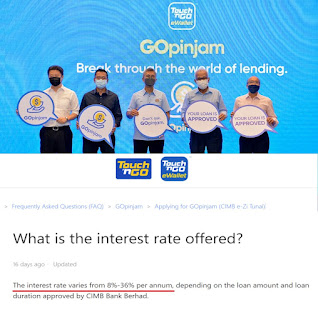 If the failed RFID launching by CIMB's subsidiary, Touch n GO Sdn Bhd is not enough, subsidiary to the subsidiary, TNG Digital Sdn Bhd launched GOpinjam with interest rates comparable to any local loanshark or Ah Long.
It is another dangerously reckless initiative from the same company.
The ceiling interest rates charged by Ah Long made legit by PH government under the Ministry for Housing and Local Government (KPKT) is 18%. However, GOpinjam stated interest rates in their website here ranged between 8-36%!
In the Q&A on the TNG Digital website, they do not claim the outright usury or riba rate as syariah compliant. However, they are  ...

...  currently looking at rolling out Islamic financing via TNG eWallet. We must ensure that we are in full compliance with the Shariah requirements before we roll it out to customers. Hence, it will take some time before it’s made available. 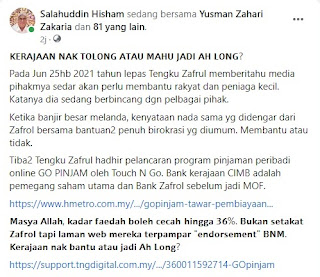 Salahuddin posed the question whether the Minister of Finance, Dato Seri Tengku Zafrol Aziz is serious in helping the rakyat through their difficulties arising from the recent calamities and disastrous lockdowns and emergency implemented by previous Prime Minister, Tan Sri Muhyiddin Yassin.
Or government has turned to be as opportunistic and vulture as any Ah Long.

The message on the placard held by the Minister of Finance at the launch on April 1st certainly sounded like an Ah Long's take it or leave it offer.
Will a default result in broken wrist or ankle to the borrower?

GOpinjam offer personal loans from as low as RM100 to a maximum of RM10,000, to users aged 21 to 63 years old with repayment period ranging from one week to one year. Correspondingly, the rates vary too.

Their sales pitch is there is no hidden fees or early settlement charges. Upon approval and notification, money will be disbursed into either their e-wallet or CIMB bank account.

Similar to any Ah Long, the process is simple. It only require verification of the application info.

The same similar conceen of the RFID is the risk of infringing the private data protection. The requirement for prior application will mean revealing private information to foreign and non-bank companies.

In Indonesia, the leak in private data involving Fintech has resulted in rampant scamming involved in forex, online borrowing, robot trading and others. Despite various precautions to the public, the illegal activities still persist.

Malaysian authorities are not renown for being efficient in either taking pre-emptive measures or enforcing the law. 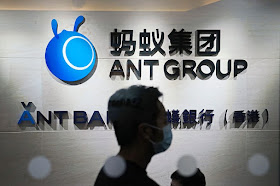 In Najib's Facebook, Salahuddin shared two links to Forbes website on the reason China disallowed their public offering in Shanghai and Hong Kong in November 2020.

Till today, it is still facing problems in  lack of investors' confidence. Yet Malaysian GLC welcome them with open arms.

The American media highlighted the problem Jack Ma had with China's establishment. However, the first Part of the three part Forbes article summarised the problem into three factors, to quote below:

The second part was summarised as below:

Ant is creating the conditions for a repeat of the same sort of “sub-prime” credit crisis that triggered the 2008 financial debacle in the U.S.

And in the final third part, the writer viewed the problem lies with Ant not a financial institution but taking over the role of Banks, in the cynical quote below:

Ant has become a giant in financial services, astride the Chinese market, and ready perhaps soon to similarly overrun the stodgy bankers elsewhere.

The presence of the Minister at the launch, CIMB being his former employer, and logo of the government of Malaysia and Bank Negara Malaysia at the bottom of its website only indicate his endorsement to an Ah Long business model and introducing a potential financial contagion problem.

But yet instead of showing willingness to assist the helpless public to withdraw their EPF, MOF could approve an application and have a GLC collaborate in a business of questionable model and legitimising the suppression rather than protection of the public.

Do not be surprise a repeat of Tabung Haji in which financial parasites in Islamic headgear would do syariah gymnastics to justify this usurious consumer loan with Islamic sounding terms.

Zafrol
Sosmed is already labelling Zafrol's as Minister of Banking for his myopic understanding of his role as Minister of Finance. His endorsment of GOpinjam and Ant Group business model proves otherwise.
One banker claimed he is not a real banker in this message below:

Can you please advice bloggers and netizens not to attack Zafrol by virtue of him as having been a banker. He is not a real banker. The whole industry knows he only got his top jobs in the banking industry because he knows how to lobby. By calling his failure as Finance Minister because he is banker brings disrepute to all the real banker out there.

His colleagues at Avenue Capital have long described him as "everytime he fails he moves up". It is certainly a classic case of rising to the level of incompetency.

He is seen as an aloof and selfish aristocrat whose too distant from the life of the common folks and lacked any apathy for the downtrodden due to the economic fallout of the administrations he was involved.

Words heard from among corporate watchers and business people is that Zafrol is in cahoot with Tan Sri Muhyiddin in an endeavour that will cause permanent and irreparable destruction to the country in similar vein as Indonesia and Phillipines faced after Suharto and Marcos.

Its no more about politics and political parties.