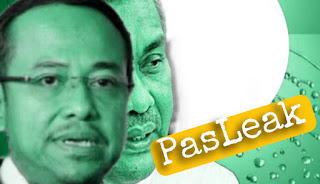 Amanah Youth leader, Mohd Hasbie Muda is right to describe Dr Samsuri Ahmad's response to call leaked PAS political report as rubbish is not convincing.
The alleged report was apparently his and Takiyuddin Hassan fact finding engagement with political leaders. Responses from leaders implicated in the report are predictable and no convincing denial put forth.
There is no proof yet to support the authencity of the report, but neither is there any serious attempt to convince the public by disproving or dispeling the logical content of the report.
Generally, consensus of sources considered reliable and resourceful by this blog view the content as believable. The points raised in each engagement is hardly surprising.
Furthermore, Samsuri did not deny the existense of the meetings. Whether the alleged report was presented and discussed in the PN meeting or not, it is secondary. So does Samsuri's denial on the intention and discussion of the meetings.
This is the first point to agree with Hasbie. 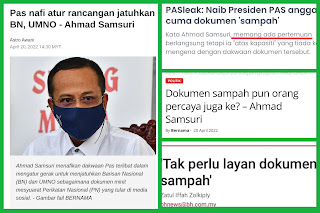 Samsuri's denial of any plan to topple the government, existence of collusion, and interference in the court is only expected. Had there exist a plan, it is expected of Samsuri to deny. It deems his denial as irrelevant.

The content in the documents released by a new blog here have been the talk in the political circle and hardly deviate with the views of political strategists.
More so, Mahathir indirectly gave credibility to the document by his disclosure of Muhyiddin's large canopy plan to overthrow Ismail Sabri before GE15.
Nervous PAS 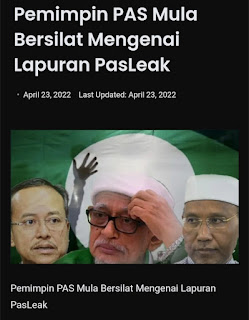 Secondly, PAS's Central committee member Awang Hashim seemed to conjure up an excuse in haste.
He claimed the documents was fabricated to severe the good relation presumably between UMNO and PAS. Harakah used the same bad intention cliched line of argument.
FMT's Mohsin Abdullah asked are they in good term now?
It is also indicative of the worry the content will increase the distrust of grassroot members towards PAS leadership. Unquestionable loyalty or wala'un is not a common trait in PAS these days.
Third and not necessarily the last, Samsuri's reluctance to take action - legal or police report - is a dead giveaway of the presence of blowing wind rustling the tree branches.
He refused to take any legal action and considered it lengthy and wasteful. Why then he not do a police report?
Does he fear police investigation will find some truth in the allegations and as happened before, the one making police report end up being investigated or charged? 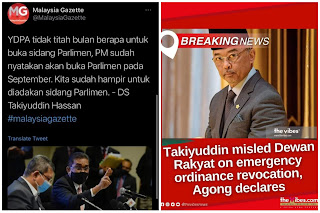 Adding to the suspicion, Takiyuddin is a former law Minister. He has a reputation of being manipulative in the administration of the law.
Single handedly, he made the decision to call off the emergency without notifying the Agong, Parliament, and public. There is no smoke without fire.
Hasbie called on Hadi to issue a denial. He merely repeated the same.
Despite the coordinated response to ignore and claim ignorance, PAS are not refraining from reacting.
Leaders are nervously chorusing the same reply and there are those redirecting blame to point finger at former PAS Minister, Khairuddin Takiri. 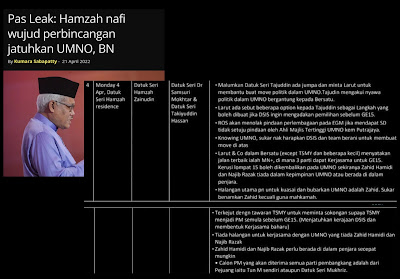 Hamzah Zainuddin also denied and called it rubbish. As Secretary General of both PPBM and PN, he vouched there was no such PN meeting.
Coming from him, it is equally unconvincing. Within the political circle and to political observers, the report is representative of what and how he is capable of doing.
He is suspected as the invisible hands behind the plan to smear Mat Hasan as another Court Cluster.
From UMNO side, Hishamuddin denied involvement to topple party leadership. The documents alleged he offered the solution for Zahid to serve time and subsequently granted pardon.
UMNO Secretary General Ahmad Maslan given a statement no action will be made against him and Tajuddin Rahman. However, Khaled Nordin requested the implicated UMNO leaders to explain the purpose of the meeting.
Another name mentioned in the alleged report is Dr Masrizal.
Serious implication 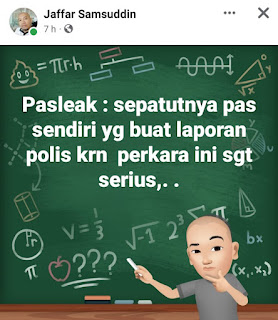 UMNO President Zahid Hamidi is leaving it to public and UMNO members to draw their conclusion.  He has left for Mekah to do his umrah, but his lawyer will be making a police report.
By right, Samsuri and PAS should be making the police report and offer to cooperate with investigation. 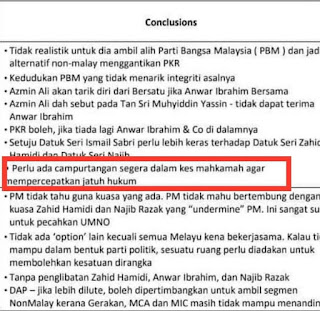 The serious implication of the alleged leak was pointed out by Shahrir Samad. It raised the suspicion of a formalised collusion involving politicians, law enforcement, Attorney General and Chief Justice.
UMNO Kelantan Chief Jazlan said it is shameful on the government machinery and judiciary should the alleged plan turned out true.
Without mincing his words, he mentioned PN orchestrating a malicious and dirty conspiracy. 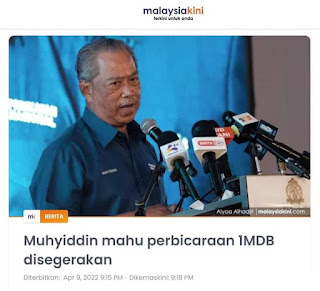 Rumours have been circulating of a plan to sent Zahid and Najib to prison by July. It seemed believable because Muhyiddin called on the court to quicken the pace on the 1MDB trial.
However, Najib explained in his FB that it is not possible because there are ten court cases concurrently going against him and the schedule is tight.
The court date with the Federal Court on SRC case will only meet in July but to address the application to have a Queen's Council.
Muhyiddin is still silent on the alleged leaked document. 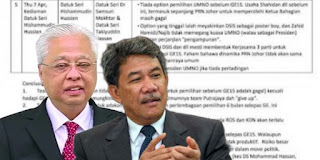 In the meanwhile, Ismail Sabri said he does not know the authenticity of the document. He too will be leaving for Mekah to do umrah soon. 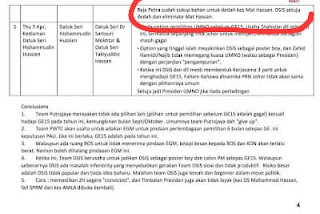