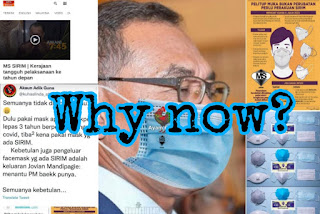 Its laughable but in Malaysia, SIRIM approved facemask can lead to the toppling of government.

It started of as a curiosity as to why the announcement made yesterday for a heavy-handed fine for both sellers and users of non-SIRIM approved facemask.

Sosmed conversation typically gets political and what the heck. At the rate it is heading, might as well claim it is a conspiracy to topple the goverment.

Initially, a distant and political friend alerted of the viralled orange poster announcing the measure with the remark, "Swine!".

This blogger didn't quite pick up. The writing on the poster was too small to be visible at one go. It should be good that the facemask sold in public meets certain quality standard.

He responded to say this will be a death nail to the "ruling party". Call for GE15 and just hand the government over to DAP.

So we searched on the subject of SIRIM facemask on Facebook.

Immediately noticed several familiar Facebookers defending the government in the usual standard and somewhat cliche manner of explaining the issue. Frankly, it did not answer and fulfill our curiosity.

Why now to implement such rules? Is there a conspiracy, perhaps by civil servants, against government or Prime Minister?

The first comment read on the issue is below: 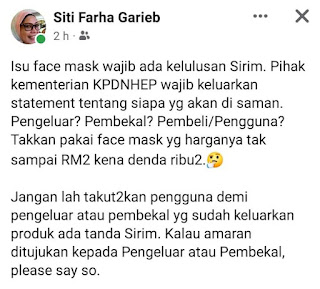 Then we realised the uproar is over the fines and it turned out to be an exorbitant one. 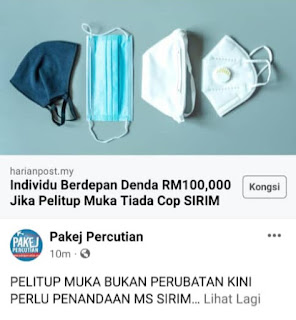 If this is fake news, it would certainly be believable to Malaysians.
It is a continuation of MOH's ridiculously excessive fines posed for breaking Covid 19 SOPs. It is among the health policies that made Khairy Jamaluddin more unpopular than he already is.
Khairy abused his power to be vengeful of Dato Najib by indiscriminately picking on him and was swift with the heavy compounds during campaign at the Melaka and Johor state elections.
A Facebooker probably payrolled to viral rationalised the move as meeting SIRIM standard for locally manufactured product has been a government policy since 1966 and ramble on the reason behind the policy.
Its a macro answer but problem is it is both a cliche and evading to answer in the same manner TNG Digital did on the 36% interest rate charged yesterday. It is not a critical analysis of the problem.
The writer is usually obtused on issues of public concern and takes the side convenient to his political objective. He is overly defensive that he could not envision overzealous enforcement can blow up and eventually lead to losing GE15.
Another FBer here failed to allay the public uproar and insulted readers for not reading the news in full.
Then there is the Ministry whose Minister seldom labelled as Cap Ayam.
The FBer claimed KPDNHEP Minister, Alexander Nanta Linggi clarified the RM100,000 fine is not on users. However, the said poster came from his Ministry.
Have held back critic of his poor handling of the ayam issue that PM had to step in, sekarang facemask issue pulak!
Seriously, this Sarawakian Minister and son of the late Temenggong Jugah has an articulation problem in communication.
So we read through the poster on the professional "virallist" Facebook: 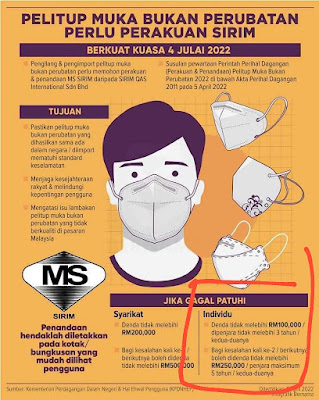 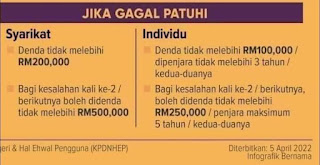 Its rather heavy handed to pose RM100,000 fines or up to three months imprisonment on individuals.
The poster from Alex Nanta's Ministry does not say individual producer or seller or users. A clear case of failure to communicate.
Its fair then for PM to use Malay for international relation. Government department themselves have poor command of the national language in their communication. So forget English!
The issue has nothing to do with achieving SIRIM standards. But it is the heavy handed and unnecessary fine.
And PM had to do a U-turn again and postphone the implementation to next year. Quite fair!
Seriously, why now? Why after more than two years of using facemask dilligently, only now KPDNHEP insist on SIRIM certified facemask?
FBer Kak Fadh here questioned its relevancy because pharmacies or celebrities or business people or even Shopee are not selling or using SIRIM certified facemasks.
How will they implement the law? Stop the use of Facemask as anti-vaccine advocating? 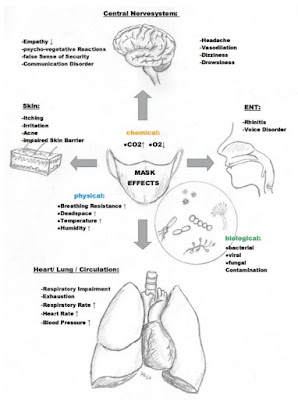 Apparently the use of facemask has its medical drawbacks. Most asthmatic patients complained of short of breath, more so when Noor Hisham suggested wearing two facemasks at one go.
Putting that aside, this Tic Tocker said it well that given current economic condition, its inappropriate.
This is typically the patronising attitude and lack of sensitivity of civil servants, authorities, and lawmakers!
Alex also has a bad habit of making insensitive comment on the ayam issue. He has a poor understanding of the ayam market and industry structure.
Subsequently, he was lazy to pursue a solution and took the easy way to indiscriminately used price control. It led to supply problem thus causing prices to spiral upward further.
Small and few major chicken producers closed shop. Our protein source will deplete.

Back to the facemask issue, the logic of this law can be summarised as plainly ridiculous.
And there is always politics ...

Despite Alex's announced postphonement, perhaps this Tic Toc can explain the motivation behind the uproar.

Notice it is not GPS or PN but BN being blamed.

This anti-BN and anti-KJ Tic Tocker repeatedly pick on any petty issue. He is in his elements to seize on the opportunity.

Unless some politicians benefit from the policy, it a hit but no homerun or loaded bases.

It need a self interest angle to be real. 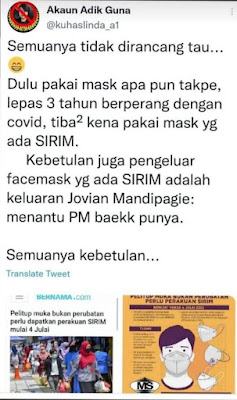 This dude found an angle to spin and blame PM. 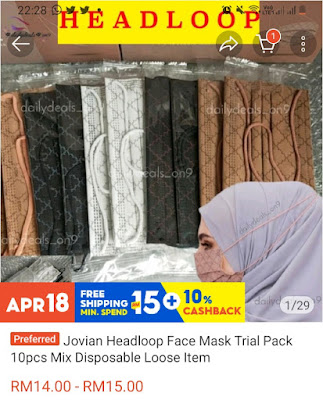 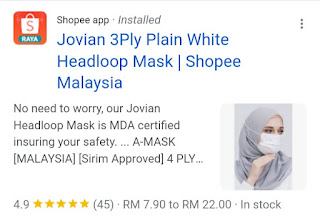 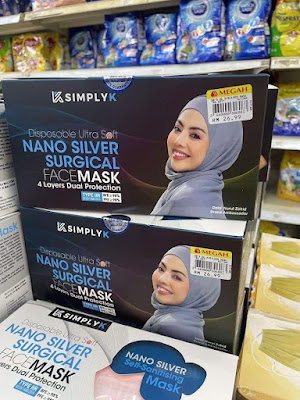 We were only reminded that many months ago and earlier Zahid's daughter launched her own high-end SIRIM approved facemask.

More so, the "pro-PPBM, pro-party election before general election, and no Bubar" faction in UMNO are Ministers and started their campaign to push him off.

Unless Khairy again do an unplanned offer to be President, their plan is to put up Ismail Sabri as UMNO President. RPK and some branch leader from Setiawangsa started picking on Mohamad Hasan.

Since they would not likely lend Zahid's daughter a hand in business, Zahid cannot be profiteering for his daughter from insider information on SIRIM requirement.

If Zahid is not, neither is Ismail albeit his son-in-law.

There is always the possibility of government servants sabotaging the ruling party.

It happened on PH government for failing to administer, brutal in their enforcement and changing policies ridicuously at will to the detriment of the people, civil servants and country.

Unless there is a rampant penyamun by any Minister or group of Ministers or a character like Tony Pua and Lim Guan Eng, one need to put a finger to suspect of sabotage.

As far as Jovian and Norul, they may have done their market research and bank-in on the fact that ....

Even endemic stage Singapore insisted on facemask at certain places.

Malaysia will merely follow suit and KJ will insist if WHO request. If the Pandemic treaty is signed, it could put him in deeper trust deficit.

The fear mongering continues and Malaysia continue to suffer unabately.

National leadership stuck with various political, administrative and personality constraints unable to disentangle the mess of PH and PN-led administration to steer country on a direction.

Might as well get new mandate from rakyat. But which will come first: Party mandate or people's mandate?

Vaccine and facemask mandate is still for sure.