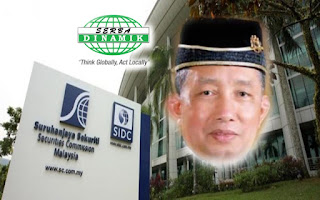 It turned out to be premature to claim the compound imposed on Serba Dinamik Holdings Berhad's Directors as anti-climax and the ending. The saga had escalated further into another episode and looks to be far from ann ending.

It is frustrating for parties closely following Serbadk issue to be denied the truth. SC or more precisely Attorney General, Tan Sri Idrus Haron's office decided to hold back charges and merely imposed compound thus saving lurid details from being revealed in court.

Till the compound imposed, the authority and The Edge as the media that supported SC's cause claimed the account are fictitous and manipulated.

By not going to trial, Idrus Haron denied justice to the minority shareholders and investing public. He is not sending a stern warning to the new crop of top executives in PLC currently rampant in the market conjuring up fake account.

Why did Idrus decide so? What is the motivating reason? Is he being instructed? Is something insidious happening?

Then there is the childish manner SC is reacting and retaliating to Serbadk.

This could only be motivated by revenge. More puzzling their action is petty.

Serbadk issued a 26-page statement to protest and question SC for their action to compound the Directors. The Edge reported below: 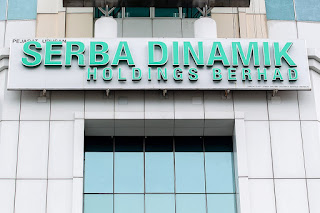 The oil and gas service provider, which is embroiled in audit issues, argued that the SC is obliged to prove that each and every director knew that the statement was false and caused it to be announced as it believes that the way the charges were framed was that the responsibility for the alleged false statement rested on the (Serba Dinamik) board.

“What is of course not explained in the press is the fact that the SC did not cause charges to be brought against the entire board but only against selected directors and persons who were not directors. This is for SC to explain,” it said.

To recap, in December last year, the SC pressed charges against Serba Dinamik’s directors and officers for submitting false information to Bursa Malaysia, an offence under Section 369(a)(B) of the Capital Markets and Services Act 2007 (CMSA).

Meanwhile, Serba Dinamik also argued that the SC should provide a document that shows how entries amounting to RM6.014 billion were entered into the ledgers of the company and how such entries constitute false statements.

“What is of course necessary is that the alleged false statement is specifically the cumulative revenue figure in the announcement of the 4th quarter results, being results for Dec 31, 2020.

“It is therefore surprising that the SC does not allege that the revenue figures for the first, second and third quarters are false,” said Serba Dinamik.

The group added, the SC has not shown how the entries in the accounting records of Serba Dinamik Sdn Bhd, a subsidiary of Serba Dinamik, could contribute to the cumulative revenue figure for the fourth quarter.

Serba Dinamik also alleged that the SC had threatened the staff of the company by offering them to become witnesses against the company and the management. The group claimed that SC informed the relevant staff that they would not be charged by SC if they were to accept the offer.

“The SC should explain why the investigation is being continued even after the charges were made.

“The fact that charges were brought before investigations were completed suggests that the bringing of the charge and the subsequent refusal to serve documents on the company gives rise to the inference that the charges were made not to secure a speedy trial, but was motivated by other improper factors which only the SC can and should explain,” the group said.

Problem leads back to SC 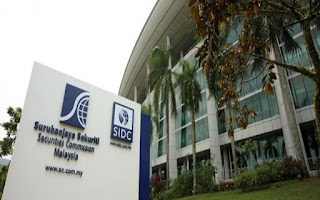 To a layman, the issues raised by Serbadk seemed relevant and SC should explain themselves.

Blogger Nuclearbursa claimed here that the root of all the problems lead back to SC.

He questioned how many times Serbadk failed to meet the IPO requirement before KPMG was in the picture, but SC kept silent. After the listing, he said Serbadk became a monster because SC failed to do their job.

He highlighted the red flag here slipped their radar. Over 1,000 days, he asked why "not a single market regulator, banker, accountant, or business journalist in this LAND spoted the red flags or had zero knowledge on what was taking place?"

He questioned silence of the SC surveillance team on who "engineered an open market raid for 13.4% of Serbadk at 80 sen per share in a frantic 60 minute trade". The video commentator speculated parties linked to Sarawak government.

In addition, SC failed to charge fund managers for market manipulation. Just 28 days before EPF ceased to be a substantial shareholder, they talk the market down by telling the world something not right with Serbadk.

Yet EPF and other Government linked Funds are still holding 15% of Serbadk. More likely than not, SC will eventually relist Serbadk and should the shares spiked to RM1, they will benefit handsomely from this drama.

Do not be surprise a new party will surface to takeover Serbadk and it is not impossible the new party was the film Director for the Serbadk movie thriller on stock market. 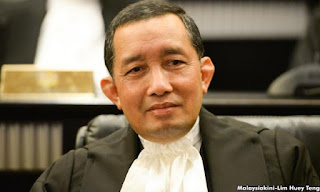 Naturally, SC disagreed with Serbadk's statement but for them to nitpick with a police report for Penal Code 499 is somewhat to a childish tantrum.

Compared to charges on fake account, criminal defamation is a mere misdeamenour. If Serbadk could prove justification, fair comment and privilege, then SC's reaction are merely whitewashing.

SC could be suspected of intentionally ignoring the red flags and market manipulation activities. Why then would Serbadk be so gung ho other than to absolve themselves if not for the possibility there is more than meets the eye?

AG also has to answer for missing all these. AGC have people parked in SC office. He should be in the know of the potentially biggest fraud case of last year.

It is no more elegance silence but abuse of power to not take action. The same manner he kept quiet on the completed IP of Zeti, and Nor Mohamed Yakcop. AG too is silent on the conflicted Nazlan Ghazali.

For awhile, this blog been saying SC is a haven of corporate thieves and blackmailers. One merely need to recall SC reaction to Azam Baki episode.

SC have access to confidential information and should be the only access to documents partially leaked by Lalitha. DAP sympathisers among SC officers were close to smearing Azam's reputation.