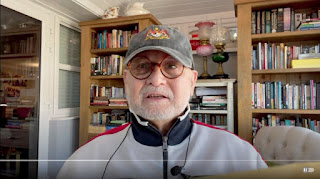 Prior to breaking fast, this blog updated Justice Nazlan Ghazali's reaction to do the second police report filed by the Office of the Registrar of the Federal Court against Raja Petra Kamaruddin for his allegation.

In the midst of breaking fast, a smart phone alerted of a Facebook update from Facebooker Salahuddin with the title in Malay "Breaking Fast wishes Nazlan Ghazali from Raja Petra" containing a You Tube update from Malaysia Today.

A message came in with the You Tube link and alerting him holding familiar looking yellow coloured filed one find in government department. Listen to the You Tube below:

Didn't I tell yer RPK must have something up his sleeve?

In the previous posting, we wrote:

It is RPK's signature style to strive under controversy. More so if there is a strong response by Nazlan.
Will there be more revelation with real meat be forthcoming and Federal Court willing to take into account that could lead to a mistrial?
Still, time is not on Najib side and within legal circle it is claimed chances is not good because all judges have personal ex-to-grind issues with Shafie Abdullah.

RPK did not waste time to dramatised it and went straight for the jugular in no time.

However, his revelation revealed a link and working relationship to safeguard Tun Dr Mahathir's interest. This is assuming he has interest in Ananda Krishnan's companies and it is not being presumptous to think so.

Will there be the desired reaction from the court and law enforcement on the 1MDB and SRC cases?

As at today, police is being blamed for slowing investigation on Zeti Aziz, husband and family. MACC boss Azam Baki was reported by media saying it is up to Attorney General Idrus Haron. He has been dragging his feet and sources in the legal fraternity beginning to accuse him as protecting Mahathir's interest.

What is the chances of Federal Court giving Najib a fair hearing to request for a mistrial with this overwhelming revelation?

Those making noise over convicted Najib's invitation to a breaking fast at the palace such as Apanama blog will soon turn silence from the embarassment of the mistimed appearance after a long hiatus from blogging.

The bigger embarassment will be the Federal Court for officially protecting Nazlan with two police report. The public will be quick to conclude that the judiciary is covering up for allegedly corrupt judges.

And there are quite a few around. Not to mention incompetent ones.

Usually there will be legal smart alecs trying to dispute the link between approving 1MDB loan and SRC. Perhaps, the sight of the familiar yellow file will shut many mouth as it means one never know what else RPK has in his hand.

This time there will be no time to waste. Any any negative responses or attempts to cover-up this inadequately investigated case used for selective prosecution will be responded swiftly.

It reminded of a quote from a senior colleague in our banking days: High flyer gets shot down. Nazlan has been having an octane boost in his legal career.

The Malay has a saying, Pandai-pandai tupai melompat, akhirnya jatuh ke tanah jual. How are the two agile squirels Atoq and Abah these days?