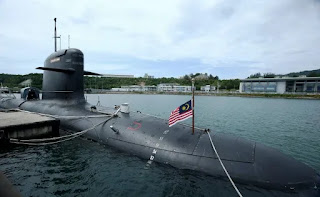 He is the former editor of The Malaysian Insider before splitting ways to join Dato Siew Ka Wai at Malay Mail. During Tun Abdullah Badawi administration, he was with then NSTP GEIC's Dato Kalimullah as hatchet man and spin master. He has not stopped being so at Malay Mail.

In his latest report, he intentionally employed the half truth propaganda strategy to seize on the public ignorance of French court system in his desk's reporting of court enquiry on the Malaysian submarine purchase from DCN (now Thales) in 2002.

Malay Mail Online report claimed that sources close to the inquiry told AFP that Thales is being charged by the  French court for complicity to a bribe in the sales of the Scorpene submarine to Malaysia.

He then went on to implicate Dato Najib as Defense Minister and Dato Dr Abdul Razak Baginda as his associate who was doing millitary consultancy work.

The French court employs an inquisitorial system over the British adversarial system. To explain, an extract from Wikipedia below:

Inquisitorial systems are used primarily in countries with civil legal systems, such as France and Italy, or legal systems based on Islamic law like Saudi Arabia,[1] rather than in common law systems. It is the prevalent legal system in Continental Europe, Latin America, African countries not formerly under British rule, East Asia (except Hong Kong), Indochina, Thailand, the Philippines, and Indonesia. Most countries with an inquisitorial system also have some form of civil code as their main source of law.

In an inquisitorial system, the trial judges (mostly plural in serious crimes) are inquisitors who actively participate in fact-finding public inquiry by questioning defense lawyers, prosecutors, and witnesses. They could even order certain pieces of evidence to be examined if they find presentation by the defense or prosecution to be inadequate. Prior to the case getting to trial, magistrate judges (juges d'instruction in France) participate in the investigation of a case, often assessing material by police and consulting with the prosecutor.

The inquisitorial system applies to questions of criminal procedure at trial, not substantive law; that is, it determines how criminal inquiries and trials are conducted, not the kind of crimes for which one can be prosecuted or the sentences that they carry. It is most readily used in some civil legal systems. However, some jurists do not recognize this dichotomy, and see procedure and substantive legal relationships as being interconnected and part of a theory of justice as applied differently in various legal cultures.

A lawyer familiar with this case explained that the French use ‘charged’ rather differently.

Thales being ‘charged’ means the ‘magistrate’ (reports state judge) looking into the case has referred the matter to the prosecution’s office (like our AG) to consider going for an actual trial.

The ‘magistrate’ looks at anything given to him/her including hearsay and recommends to the prosecution. Then prosecution will study if there is ‘evidence’ only then make decision to proceed.

We have gone through this road before.

In 2012, Cynthia Gabriel and C4 took  advantage of the public ignorance of the French legal system to propagate the lies Najib is being charged in the French court.

Leslie Lau is attempting to rewind the same story line.

Thales has not being charged for corruption in the supplier of Scorpene submarines to Malaysia. It is still at an inquiry stage for judge and prosecution to establish whether there is a case to prosecute.

Already, MUDA, as DAP's latest macai for the youth voters segment, is drumming up the same old tired story line. These kids were still wetting their bed in 2002 when Malaysia purchased the two Scorpene submarines - one built in France and the other in Spain.

DAP tried hard to keep this issue alive but it has lost steam. DAP's late Karpal Singh's children Sangeet Kaur Deo and RamKarpal Singh is struggling to keep it alive.

They have problem to get their lawsuit for Altantuya's family started to gather any credible evidences for the court. There is no case against government, but they are merely prolonging the case for political reason.

Dr Shariibu is being fleeced for their every penny to pay for the legal fee. Or is it for free and paid by DAP?

With GE14 expected soon, it is only expected that DAP revive the old story for lack of any impactful campaign issue.

Lim Guan Eng was the Finance Minister and DAP has to cover his failure that caused serious fiscal problem to the government leading to increase national debt, destroyed national economy, and suffering to the rakyat today.

Najib is suing Tommy Thomas for a chapter in his book for defamation in which Tommy implicated Najib for the murder of Altantuya. Tommy denied and the case is waiting to find a suitable court date to fit Najib's busy court schedule.

Caution to Muda and Leslie Lau for any attempt to implicate Najib. Zahid Hamid has filed a lawsuit against Dr Mahathir today.

UMNO leaders are in no mood to tolerate slander as they had before. Ready to face the court.