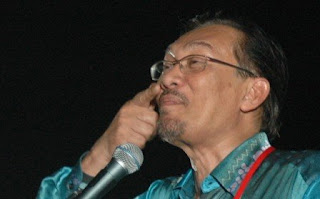 This is Anwar in his elements on-stage delivering a speech, entertaining the crowd and having them eat out of his hands. He can make you villain and hero with few contraction and relaxation of muscles in his mouth.

Tomorrow Wednesday September 24th, he is due to appear in court to await his case to be tried at the high court.

When trial begin, will it be a long drawn case? Or a short one? Will the trial be long enough for Anwar to warm the Parliamentary seat he chose to have his wife relinquished and "won" back by him? Maybe he will get at least one full Parliamentary session.

When trial begin, do not be surprised that Anwar's facial impression will change in a matter of days. 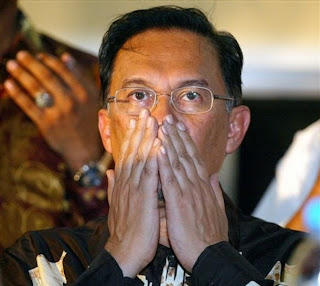 His confidence shattered, words stuttered and dream to be at the pinnacle of power he long dream off will crumble.

It was only as good while it last ...

Anwar's dramatic run to the Turkish Embassy for safety, his staged police hold-up for investigation, his denials after denials, his claims of alibi, and his crafty wasy of turning around the table on the Government made the public believed him more and more.

This blogger called it stupid, if there had been attempt to pin on Anwar on an offense of the past. Guilty as charged. But that was meant to put pressure on Abdullah.

In my deepest thoughts, the police wouldn't want to get into the same mess unless they are so damn sure.

There was a big brouhaha over claim that police found Anwar's DNA from sample taken from Saiful. Then the attempt to pass the DNA Act that made a mockery out of Government MPs.

BN Backbencher couldn't defend it well and the law was inadequate, thus needing it to go to a Select Committee for redrafting. Syed Hamid and PM refused but refused to giave any valid reason.

Parliament was in the midst of this debate, when Anwar came into Parliament. With Government taking the case seriously, he was seen in a hurry to expediate his entry to Parliament. But Anwar will not able to extricate himself unless he takeover Government.

Thereon he fastforward his plan for the takeover of Government, working earnestly to create the greatest illusion of a massive BN MPs crossover reminiscence of his takeover of Sabah Government in his days in BN as DPM.

He boldly claimed he will form a new Government on September 16th. But it didn't materialised. Public's trust for Anwar is slowly waning.

Tian Chua is trying keep the crossover alive. He claimed Abdullah was given notice for a smooth transition on Octoer 1st. This maybe a serious claim since he did hold talk with PAS.

But frankly it wil not amount to anything. Everyting is signed sealed and delivered. Anwar is counting the number of days the world will crumble on him.

KUALA LUMPUR: Sessions Court Judge SM Komathy Suppiah has set Oct 7 to deliver her decision on whether to transfer the sodomy trial of Datuk Seri Anwar Ibrahim to the High Court.

The PKR adviser was charged on Aug 7 with sodomising his former aide Mohd Saiful Bukhari Azlan. He pleaded not guilty.

He was at the Sessions Court at 9.58am, accompanied by his wife the former Permatang Pauh MP Dr Wan Azizah Wan Ismail and his lawyer S.N. Nair.

The prosecution had asked for the matter to be transferred to the High Court.

The defence objected because the transfer notice was signed by Attorney-General Abdul Gani Patail, whom they noted was being investigated following a complaint that he had tampered with evidence in Anwar’s cases 10 years ago.

Anwar is accused of committing the offence at Desa Damansara Condominium in Jalan Setiakasih, Bukit Damansara, between 3.01pm and 4.30pm on June 26.

If convicted, he can be jailed up to 20 years and whipped for voluntarily committing unnatural sex under Section 377B of the Penal Code.

what win big if u cant pass that damn DNA act?

how about u win big like 8 more to full majority? will they be able to BS people like they are now?

anwar also cannot do anything if u have big majority. my definition of big win is not '8 more to 2/3 majority'.

everything is coming back to u man.

forget anwar. he can only speak if someone un-muzzled him.

The only sure plausible possible undeniable speculation of the 7 Oct decision is Anwar's balls will be strung high. Fullstop.

There will be balls rolling...