In another posting, he wrote without referring to anyone, though he hated a person for destroying the Malays, he wish he die in Iman and Allah forgive his sins.

This morning a source close to Dato Seri Ahmad Zahid Hamidi confidently claim he is short by 3 seats. When asked if Zahid signed any Statutory Declaration to support as claimed by most political columnist, he gave an emphatic, NO!

Except perhaps Dato Nazri Aziz, he affirmed UMNO is neither supporting Anwar nor Mahathir and will remain steadfast with the opposition coalition of BN and ummah unity with PAS.

This evening an important source of information claimed Anwar has the number and is ready to meet the Seri Paduka Baginda Yang DiPertuan Agong with the Statutory Declarations of MPs already signed.

When asked in jest will it be on September 16th, the source said this is for real. It is only a matter of when he will seek the audience with Agong?

So everyone read Zahid wrongly?

One can never know what politicians do beyond our eyesight, but beyond the eyesight of most analysts, there are information analyst are not privy too.

More so, the analysis of most University lecturers tend to be dependent on official statements and media reports. Its like forecasting share price with last years results.


The source confidently said Mahathir's reading is right. Though Zahid is a long time friend of Anwar, his loyalty is to Najib.

The source close to Zahid confirmed the same information.

Among the reasons cited to speculate Zahid remained loyal to Anwar was that he was never adversarial towards Anwar and PKR and even extended help. Upon release from prison, Zahid gave Anwar the benefit of the doubt and believed he would have repented this time.

However, Zahid changed his view after Anwar's trip to Turkey in July 2018 which was reported by the media for spinal surgery and Lim Kit Siang came to visit Anwar.

He only said Anwar did not change. 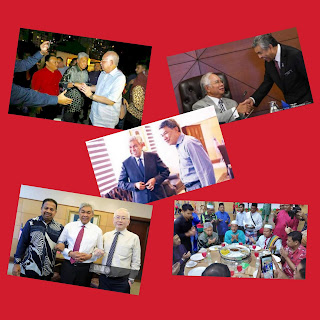 Immediately upon winning the UMNO Presidency, Zahid decided the way forward for UMNO was to strengthen itself by befriending PAS.

During the garden leave, Zahid had been instrumental in forging the cooperation into a cohesive understanding from the leadership to reach the grassroot level. 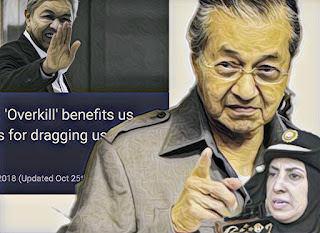 When asked how did Anwar managed to get the numbers, both sources blamed it on Mahathir for his overkill and repeating the predictable.

He continued to make enemies and quarrel with everyone - both against opposition and friends within Pakatan.

Mahathir lost support he already had in hand due to his high handedness. He lost potential support that could have turned his way due to his refusal against reforms promised in the manifesto.

The last straw was Latheefa Koya's move few days ago. It did not heed the statement of Dato Nancy Shukri.

MACC moves by Latheefa to pile up more charges against Zahid up to 87, 41 AMLA cases, double jeopardy charge against Riza Aziz and failing AG cases on the SRC trial and postphonement of 1MDB case against Najib is building up a perception in public that it is all political persecution.

Though the tax bill against Najib is a separate issue from Latheefa, the negative perception is set in stone.

Mahathir is known to be cryptic in his political statements. However, the statement below is seen to have desperation written all over:


The common response is to rewind back his words against UMNO. Generally, the anger by both Malays and UMNO members towards Mahathir for destroying UMNO is reflected in the comments in the You Tube posting here.

It make no sense for Mahathir to expect UMNO members to join smallish PPBM.

There are those who viewed Mahathir's words as threat to abolish UMNO. Then, PPBM, PKR and few other parties will be declared illegal together.

It would then be the same poison pill play to declare the original UMNO illegal.

There are sources who believed Mahathir has registered UMNO Malaysia and will repeat his past episode of UMNO Baru seizing assets of the original UMNO.

This time around voters will punish Mahathir and anyone associated with him in the next GE for such highhandedness and abuse of power. 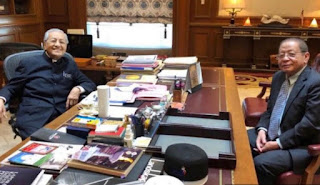 Mahathir's recent comment to appeal the ICJ's decision on Pulau Batu Putih is a clear indication he is forgetful and losing his grasp. The Malay say nyanyuk or senile.

Immediately upon assuming the Prime Ministership, his first few order of business was to cancel the appeal already submitted and date set.

The window of opportunity for appeal has passed a year ago. Pulau Batu Putih will forever be Pedra Banca.

Mahathir is losing grasp of things and Anwar saw that. Anwar will not go all the way but play it cool.

The diehards remained adamant Mahathir could still pull a rabbit from behind the ear with the lever of power in his hands. The old dictator has not lost his touch and is merely berlakun nyanyuk (acting senile) to be underestimated.

To each, their own view and interpretation. The right answer is only when the event unfold itself.

As it is, this blog had warned that the 45 minute meeting between Kit Siang and Mahathir recently may not necessarily indicate Anwar's game is over.

During Ramadhan, this blog wrote about Kit Siang led an entourage of DAP leaders to meet Mahathir at his home and requested he announced the schedule for the power transition. Kit Siang is not easily swayed by events.

Heard over the grapevine that the schedule for power transition has been set but not announced. There was a meeting held with Mahathir involving Dr Wan Aizah, Kit Siang, Mat Sabu and Tan Sri Muhyiddin to discuss and finalise the matter.

For the public consumptiion, it will be tamed down and told the planned transition remained on course as agreed and will be decided within a year.

It puts into perspective the speech by Mahathir in Johor. He had came down to meet PPBM Johor leaders for the first time after the controversial appointment of new Johor MB. But Muhyiddin was not there.

However, there was a call to urge the top three position of Chairman, President and Deputy President of PPBM not be challenged.


In the meantime, Anwar's speech at University Malaya is so relaxed and confident. It is not about if but when. It is already signed!

However, the RM1 bet with a Seremban PKR friend is not necessarily in his favour yet. In one year, Mahathir will keep on trying. He has long planned to dissolve Parliament than give the position to Anwar.