Politically speaking: The return of Zahid and Mat Hasan 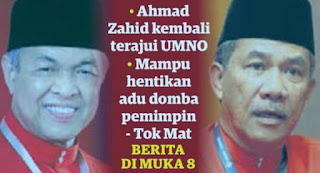 The rumour of Dato Ahmad Zahid Hamidi returning from gardening leave to resume the UMNO Presidency have been going around for few months.

It was long anticipated that there was sufficient time for politician-led MACC to slap him with additional 33 more charges related to alleged corruption involving RM42.76 million from Ultra Kirana Sdn Bhd in relation to the Overseas Visa System and One Stop Centre in China.

When he was charged last week, a friend texted to comment Zahid is gone. But when he made the long expected surprise yesterday, the impulsive comment from most non-politician observers is to question UMNO for accepting a tarnished Zahid back.

Is Zahid gone or back?

It depends whether one is talking politics or something else. Often the case, Malaysians wants to talk of politics but it is about something else. And when they talk about a subject, say corruption, what they actually is talking or end up talking is politics.

There have been many analysis and opinions on the return of Zahid such as concern on moral perception, number game between supporting Tun Dr Mahthir or Anwar. and handing over the presidency to Dato Mohamed Hassan.

Really, what is there to talk about? This is UMNO internal party matter and only for public observation but not concern. UMNO presidency does not determine national leadership.

Yet the Mahathirites and Anwarista are competing for UMNO MP votes. Will there be a vote of no confidence in Parliament? 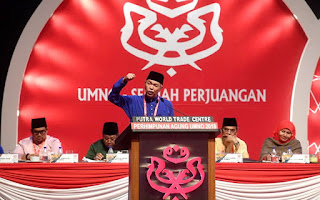 Zahid is the legitimate President, elected by the party and as far as party rule, he has not infringed on anything to warrant him to be expelled. The leave was not granted by anyone or group of people.

There was a political situation he needed to avoid by taking leave. Dato Hamzah Zainuddin demanded Zahid to withdraw or he crossover, but Zahid was elected so he took leave. He merely informed his deputy and the deputy agreed to be acting president.

Hamzah ended up still crossing over to PPBM. The demand was never genuine.

There was no reason for Zahid to be on gardening leave. There is no gardening leave for a political party president. When one takes a long leave, in this case is 7 months, the acting president will have to take charge and do what he think is best.

What the acting president thinks is best may not be viewed as best by the president. He may have acted wrongly or end up not doing anything. He is a former banker and businessman and the manner of his decision making is based on snapshot view, but that is how he is.

If anything goes wrong, the acting president should not be blamed. That is unless he made a decision unilaterally. 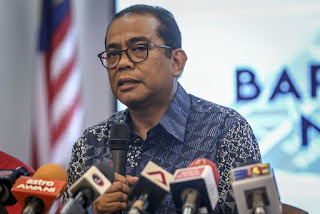 For instance, it was  a sensible thing to do to clean UMNO of any corrupt practises.

Although many people out there including UMNO supporters are cynical and claimed how could those with soiled hands try to clean the party, attempt they did.

There was a failed effort by Dato Khaled Nordin to institute a constitutional amendment to expel members linked to corruption. Some say he attempted to have those charged for corruption removed of the party. But some say it is only for those convicted of corruption.

Which ever way, politics got in the way. 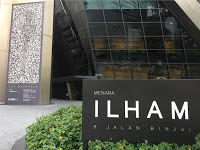 Khalid was seen as collaborating with the enemy for taking advise from a think tank based at Menara Ilham, Jalan Sultan Ismail, Kuala Lumpur and led by a Sarawakian.

And it was seen as a manouvre to remove Dato Najib and Dato Zahid from UMNO.

However, one could partly blame the former MB for "Johor Baru" for it. He seemed to be blaming everyone, particularly Najib, but himself, for his lost at both Parliament and state seat in Pasir Gudang.

The 87 charges against Zahid is already in court. Though many have judged him guilty, it will be for the court to decide. Personal opinion does not matter any more and discussion should end. 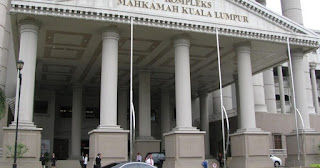 However, the court process is not without its politics.

There is a criminal trial in which the prosecutor is a civil lawyer and judge is civil law judge doing for the first time an important criminal case.

For instance, the civil forfeiture against Najib and his wife has the suspicious intention to deny him access to asset and money. That is constitutionally wrong.

The civil forfeiture against the 41 names allegedly linked to 1MDB money has similar intention and an obvious case of wrongful application of AMLA and civil forfeiture. It is no more along the legally intended purpose of preventing money from criminal source dissipating away but political intention to inconvenient the 41, including one deceased!. 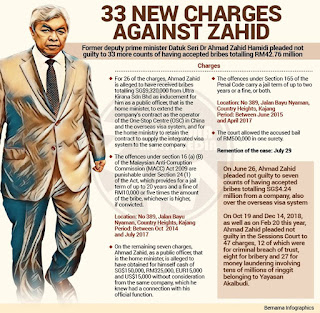 Former MP for Bukit Bintang and Wangsa Maju, Wee Choo Keong made an expose of the one stop centre last year. However, his exposes got former MCMC Chairman, Dato Shahril Tarmizi and Dato Siew Ka Wei investigated, but no charges made.

It may have been politically convenient to charge Zahid. Similar to the movie The Untouchable on the indictment of Al Capone for tax evasion, there is a 555 bookkeeper's notes as evidence with names and amount due or paid.

There are 43 names, which could include Khairy Jamaluddin, and PPBM's Mas Ermieyati. Sufficient number to do a Friday prayer congregation, but Zahid was singly picked out. Does MACC have proof of the cheques, money trail and witnesses for foreign money handed?

There is similarity between this case and another case earlier, in which the Secretary from MINDEF operating Zahid's family foundation account erred and delivered him on a silver platter to the authority to save herself.

Words are Wan Badak did the same.

For Khairy to question Zahid's return and call for it to be referred to the UMNO Supreme Council, it does raises questions on his political motivation.


Opportunism lacking in comradeship and loyalty will ended up in the wilderness. He should learn from Zahid. 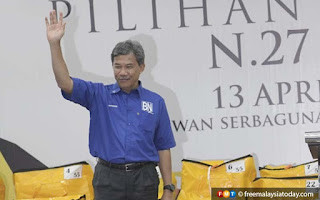 Since it is all about politics and knowing well Tun Dr Mahathir is out to "kill" Najib and Zahid politically, it is better for Zahid to emulate Najib to die fighting than dying from doing guerilla warfare.

Mahathir may have overdone his vengence. His highhandedness could draw out public sympathy or at least, UMNO members' sympathy.

In the current openness of Internet and social media, his decades old game may not work. Every actions need a convincing justification that is seen free from political motivation and insidious hands. 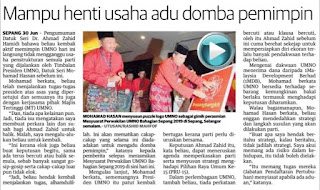 Mat Hassan has been at the receiving end of various accusations. He was openly accused of confiding with Tun Daim and collaborating with Mahathir.

Over Hari Raya, PPBM leaders were talking about UMNO 3.0 or an UMNO-PPBM unity. Between them, it is said Mahathir will never pass the Prime Ministership to Anwar or Azmin.

PKR Malay leaders could not dare discuss Malay problems at their party convention. Yet Malay population is reaching 67%.

The position should only go either to PPBM or UMNO. Who will be at the helm: UMNO or PPBM or new coalition with UMNO and PPBM?

After a process of elimination, conspiracy theorist featured Mat Hassan highly as potential successor to Mahathir. He is viewed as "clean", well liked personality in public, and communicate well.

Over Zahid, Tok Mat has the edge in banking, corporate and business experience. It is the building block towards economic management skill much needed by the country in this tough economic times.

Lim Guan Eng proved a Minister of Finance could not be relied on to manage the economy. On that score, Mat Hassan credential is far better than Azmin or Mukhriz or even Anwar Ibrahim.

In the past 7 months, one weakness of Tok Mat has been his lack of national political experience. Negeri Sembilan has only 7 divisions and yet he could not control all.  He need time to expand his political horizon.

The PPBM people view it as a good thing. Coming from a small state, he need the hands of others to propel him upward. To them, it means Mat Hasan can be controlled. 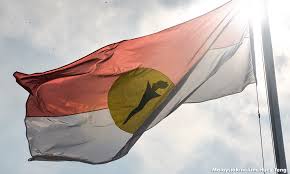 Zahid's return, despite the piles of corruption charges, could help to divert such allegation from Mat Hasan.

He could unite and streamline the UMNO organisation in the face of a possible general election from a hung Parliament in the making.

Another game going on, which may have by-passed Mat Hassan attention, is the double dealing by certain UMNO leaders. From the crossover of UMNO MPs to PPBM, it is for certain a comunication line exist between certain UMNO and PPBM leaders.

PPBM is not financially as sound as they are thought to be. The call by Vice President, Tan Sri Rashid to raise money for the party from government contract may have been obstructed by Guan Eng.

It is also believed that there are certain hands creating other back channels between UMNO and PPBM that cooperate to keep both entities afloat financially.

Judging from the views of playmakers in PPBM, it means Mahathir should be an official Government Adviser or maybe Senior Minister for life to copycat the late Lee Kuan Yew in Singapore.

Many are still in awe and believe the 94 year old could still keep cards up his sleeves. They believed the way he played his it is as if he will remain Senior Minister should the ummah unity of UMNO and PAS win GE15.

If Mahathir's ploy is for UMNO (Baru) to be suspended or closed up by ROS, it would be an interesting situation. How will ROS then act on PPBM, who has yet to call for a proper AGM since its inception in 2016?

What will happen to UMNO money and assets? How will the 3.5 million dispora of members react? Will PPBM with membership only in the few hundred thousands allow a mass migration that could threaten the position of the incumbent? Will the members react negatively to Mahathir's high handedness by joining PAS? 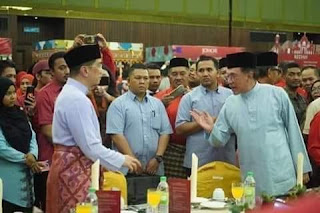 This is all theory and speculative political talk. Since the Azmin incident and Zahid's return, things are not only fluid but it could be reaching a gaseous state.

Before going into any further possibilities, what will Anwar do? What move will exasperated Azmin do?

Frankly, politics is best discussed based on policies and genuine specific social, economic and political plan and programs for the country than power play that lack purpose, accountability, and ethical and moral fairplay.