Can Mahathir possibly have 126 MPs with Felda settlers leaving as he delivers his speech?


Saturday night's posting claiming Dato Seri Anwar Ibrahim got the numbers and could request an audience with the Seri Paduka Baginda Yang DiPertuan Agong caught the attention of social media and blogosphere for a usually quiet weekend.

It had Malaysia Today, Third Force, Malaysia Chronicle and PH blogs reposted the article. The hits was in the 5 figures. In times blogs are not attracting as much readers as FB or other social media platforms, so the claim, it is not bad.

It certainly gave Anwar supporters a hard-on. That should worry both females and males.

However, the bigger worry was the posting could hardened the arteries of Tun Dr Mahathir. The old man had long resigned to the fact that his time should have come during his second heart surgery at IJN. It is his rich children, proxies and cronies that are now worried.

Sources close to a security personnel were saying vehicles were coming in and out of Mahathir's home in Seri Kembangan, near Palace of the Golden Horses till the wee hours of 3 AM last night.

Not sure whether it was medical personnel, but the Mahathir camp were churning out counter propaganda to neutralise the impact of the posting like these two "cheap" fake Statutory Declarations. 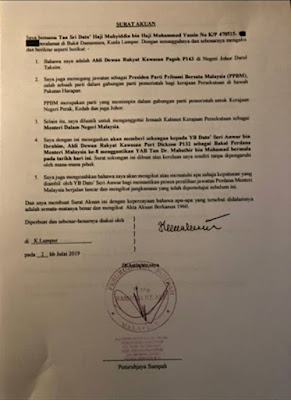 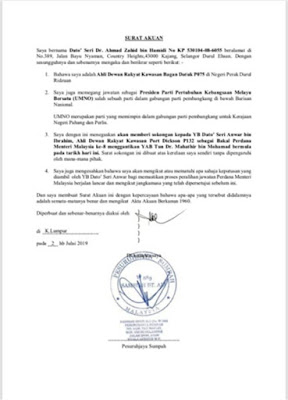 Both Dato Zahid Hamidi and Tan Sri Muhyiddin have since denied.

Zahid Hamidi went on to issue a statement to state he will not take a position for UMNO single handedly but as a team. He is no Mahathir. 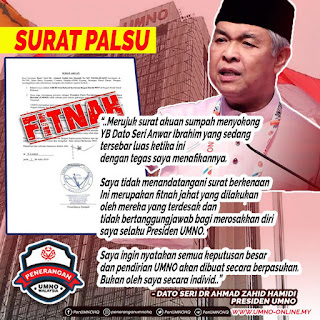 Though denied the SD, the apparent boycott by Muhyiddin and most of Johor PPBM Division Head of the meeting with Mahathir in Johor may have made him a target. Wonder whether he has any ulterior motive to update police investigation on the viral Semburit video. 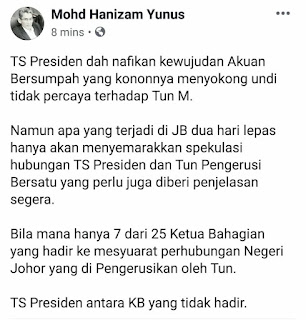 It is obviously an amateurish job which may have come from Azmin's Team or the signature of someone within UMNO associated with those comfortable with Mahathir and view his proposal positively.

Against the backdrop of such effort, one former UMNO Division Head was told by one of PM's Political Secretary, believed to be Zahid Md Arip, that Mahathir had 126 seats in hand.

One can give only too much credit to claims made by Tan Sri Isa Samad's former staff at Felda, who was saved from being charged by the court for being able to find his way into Mahathir's office.

What will be his fate should Mahathir leave office?

The least Zahid Md Arip could have done for his boss was ensure there were sufficient crowd and arrange Felda settlers to stay on for Mahathir's speech at the launch of the Hari Peneroka at the Felda Selancar, Muazzam Shah, Pahang yesterday.

The settlers did not.

In his speech earlier, Azmin said Felda will rise again and confidence restored.


Felda will rise under Pakatan Harapan. That attracted boo from the crowd but he went to agitate the crowd further to say Felda will not be made a political tool any more.

Azmin did not make life easy for Mahathir to speak.

Repeating a past scheming

According to The Edge report, some 10,000 settlers were expected to attend national-level launch. The preparation was for that size but the video showed it was barely filled.

As political secretary and one familiar with Felda, Zahd Md Arip should have known the political significance of such an event. There was supposed to be a new excitement for the settlers to look forward too.

FELDA new Director General, Dato Osman Omar told The Edge of a new initiative to be announced to enable settlers to generate more income and stop relying heavily on oil palm and its unpredictable market prices.

It was a slightly different from the past involving long-term lease method. But it turned out to be an old idea, very old idea indeed... 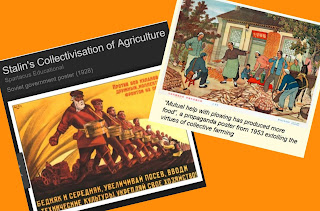 
Malaysia will be merging thousands of small FELDA lots into one huge commune farm like what Russia and China did after the Communist revolutions. That would end individual land ownership and create community ownership, which is where the word Communism comes from.

RPK further commented on what is really happening:


Tun Razak created FELDA, what the UN FAO called the most successful land scheme in the world, to give land to the landless. The Pakatan Chinese now want to turn the Malays back into landless Malays.

Osman Omar should have learned of the Russian Revolution 1917 in Form 3 the year he sat for LCE in 1974. The commune system was adopted by communist countries and it failed.

Yet FELDA want to adopt it?! 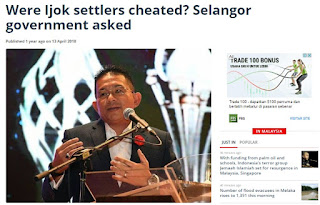 A similar concept was introduced in Ijok, Selangor but the management company convinced the settlers to part way with their lands to a developer in exchange for homes and cash.

More than 10 years later, nothing happened and it reached a stalemate. The Selangor government under Azmin sold the land to a developer for cheap at a time the price of land has rose significantly in the area.

The suspicion is someone could have squandered with some of the money and settlers should be getting RM1 million each instead of only a RM300,000 home years down the road.

Property sales in the area have plummeted and developers are facing a hard time to sell. With sales down, settlers are going to get screwed again.

The natives of Sabah and Sarawak have been fighting against NCR communal land title, which does not help in promoting land ownership among landless natives. 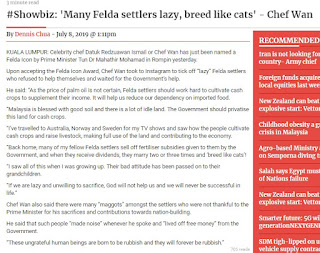 
Chef Wan was named the 2019 Felda Icon. Meanwhile, thousands took to the streets in London to celebrate LGBT rights in the London Pride 2019 gay parade.

His mulut is real cabai or was it misspelled the way around?

In the meanwhile, a picture of Siti Nurhaliza, her husband and Azmin viral at the same time yesterday. Could the singer, now married with a daughter, be attending the Felda launch to draw crowd to the event? 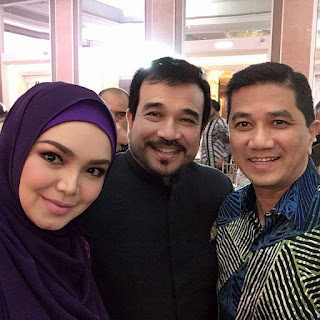 She could be singing:

That will not help Azmin. His big fan already lost hope in him.

How does the number stake up? 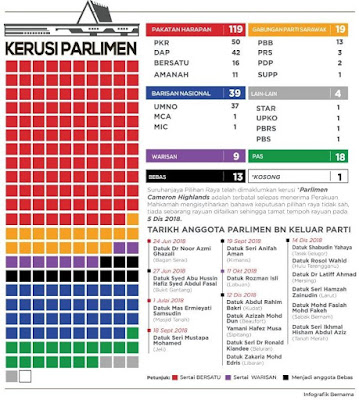 What happened at Felda Selancar certainly indicate both Mahathir and Azmin does not stand a chance of staying around any longer.

However, what happened at grassroot level Adoes not usually translate to what is happening in the corridors of power.

According to a poster claimed by Azmin's Team as viraled by Anwar's Team, 45 are with Anwar and 5 only with Azmin. Azmin's Team version as told to The Star's Phillip Golangai is 16 and the 50/50 will shift to Azmin upon being selected DPM.

Assume Anwar's Team as correct. Contrary to earlier talk of 8 DAP MPs will vote Mahathir in the event of a vote of no confidence, DAP is solid 42. That makes it 87.

And contrary to Joceline Tan's claim Mat Sabu is getting close to Mahathir, all 11 of Amanah will go to Anwar. They have struggled long and hard, thus will not be dissuaded from the promise land where Anwar is PM.

Joceline is an observer of politics, but a political watcher's view heard Mat Sabu expressed his position in front of Mahathir's loyalist.

Should there be a conflict between Mahathir and Anwar, Amanah will remain brothers-in-arm with DAP and Anwar. That makes the number 98.

Warisan is with Anwar. Though Dato Shafie Apdal is son-in-law of Dato Shuib Lazim, a close friend to Tun Daim Zainuddin, he has swayed to Anwar.

The common view is Mahathir entered Sabah and betrayed their pact with Warisan. A source claimed it was Warisan that betrayed the understanding with Bersatu for swaying towards Anwar.

It is something the suluk Shafie is capable of doing. That makes the number now 107.

With Muhyiddin at loggerhead with Mahathir, what is the chances of him to remain supportive of Mahathir?

Muhyiddin was instrumental in bringing in the likes of Maszlee Malek or Wan Saiful, whose Islamic ideology leans towards IKRAM and political leaning more Amanah than UMNO-syle PPBM. One should ponder on Syed Saddiq, who was brought into PPBM by Muhyiddin. The young man would find Anwar more appealing than Mahathir.

Muhyiddin had parked substantial number of people aligned to him to be MPs. Some will not dare to come out in the open against Mahathir. But they will dare to vote against him especially when the chips are down.

Is it not possible for Anwar to reach the promise land of 112 from the few PPBM members dare to cast against Mahathir in Parliament? Or from Sabah and Sarawak.

So where will Zahid Md Arip and Abu Bakar Yahya get the 126 for Mahathir, their boss? 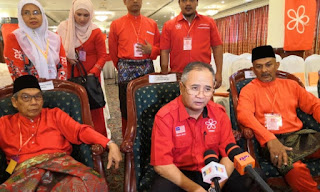 Supposed the PPBM and Independents are solid behind Mahathir, the number is 29.

There are 37 UMNO MPs, 1 MCA and 1 MIC, but the official stand is BN will remain Ta'awun with PAS. The 39 BN plus 18 PAS to make 57 cannot be with DAP or PKR or any party that is in cahoot with DAP.

Mahathir must get PPBM to leave PH to get that 57 seats support. He could make the number 86 seats, 96 seats more.

It take some convincing and promising to get 23 GPS and Lain-Lain MPs. He cannot get all but only some of them.

Supposed he got all of them by promising the sun, sky and everything else in between no plan for privatisation. It is still only 109, short by 3 to remain in power. 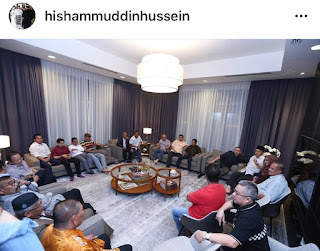 This means Mahathir need to get 17 more MPs somewhere to join his side to get 126. Azmin real number of 16 instead of 5 will come handy.

To quote Malaysia Chronicle (in exchange for quoting this blog), Mahathir could move in for the kill but why would a party, whose 6 months membership drive could attract attract more new members than the whole PPBM membership, will want to join PPBM?

Whoever is courting UMNO MPs, Tan Sri Anuar Musa reminded that as a group, UMNO's position is clear. It will not work with the side that is working together with DAP.

In the meanwhile, Sarawak is said to remain undecided or in a wait and see mode. Judging from Dato Nancy Shukri statement, they would prefer BN if Najib is still Chairman of BN or PM.

One will never know where they will swing since the popular believe is Abang Jo is close with Anwar and Pehin Taib Mahmud was then close to Mahathir. Sarawak GPS should vote the side that could believably offer more benefit to Sarawak.

As far as Sabah is concern, before or after, they will be with the winner.

So which side really have enough number of MPs supporting them?

It reminded of a past political arguments on membership in Indian parties some years ago.

Someone made the effort to compile the numbers. As he added up the membership of Indian political parties and Indian members of mixed race political parties, he was perplexed with the total that seemed more than the population of Indian in the country.

If both sides have got their SDs signed and compiled (not the fake SDs that had Zahid signed on the day he announced his return to the Presidency), there is likelihood that boths sides believed each have got the numbers because few MPs signed SDs with both sides.

If the money is US$5 million and half to be paid upon signing the SD with balance upon delivering of vote in Parliament, tolak halal haram, it is not a bad idea to be bought. Payment will be in off-shore accounts beyond the jurisdiction of PDRM, MACC and LHDN.

It is not a bad idea to take the half payment from both sides. That add up to a whole US$5 million. The balance will be a bonus.

If that is the case, Agong will pening to see many duplicate SDs. His highness should just tell the Speaker to do a vote of no confidence.