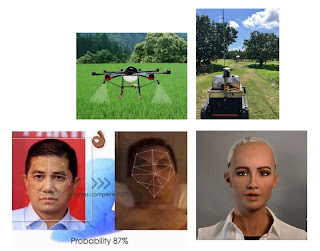 For the past few days, the media social been thriving on the latest of the never ending political saga of Dato Seri Anwar Ibrahim's aspiration to be the 8th Prime Minister.

He seemed to be moving for the kill to destroy the next possible competitor in his way. The video of Dato Seri Azmin Ali allegedly having gay sex in a hotel in Sandakan had him in a corner.

The latest development made Anwar pulled the brakes. His boys are still giving excuse he has the numbers and its only giving Tun Dr Mahathir breathing space.

The political saga will not end and it is not impossible there is nothing to it all, but mere diversion to a big robbery in the making.

It is commonly heard members of a ruling party seeking projects using non partisan or even opposition party members as proxy for insurance.

However, the public attention shifted to the police, specifically on Inspector General of Police, Dato Hamid Bador.

His statement the video is original but unable to verify the other partner to Haziq. Though Hamid relied on report from CyberSecurity for a 100% verification, the doubtful views on social media indicate he "wasted his time" and public still not convinced.

Among the views expressed are facial technology have been used before for police investigation and led to prosecution, CyberSecurity should have such technology, and sufficient leads for police to investigate and pin a 377B on Azmin.

Cliche and off-the-cuff statements from officials can be suicidal. Public could get slighted and consider it as insult to their intelligence.

Technology is available and disecting public statements is made easy, fast and viral-able. Facial recognition technology can be obtained from Play Store and they may have made up their mind.

The public wants good governance, expect transparency and not endless game of thrones. Even Rais Hussein's view on the subject is marred with politics and political interest.

This political development may have inadvertently created public awareness on IR 4.0, Artificial Intelligence and latest technology.

Few weeks back, a cousin alerted us of her involvement in robotic technology and an upcoming technology summit.

Summit? Ah Malaysians, talk big but still at its infancy. 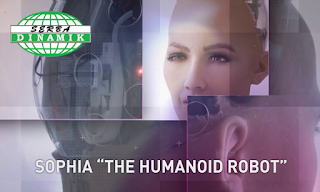 "Serba Dinamik IT, a subsidiary of Serba Dinamik Group Berhad, a global integrated engineering services provider, is featuring Sophia, the social humanoid robot, for the first time in Malaysia at the Beyond Paradigm Summit 2019 organised by the Company.

The Beyond Paradigm Summit, to be held from 17 – 18 July at the Malaysian International Trade & Exhibition Centre, will showcase advanced technologies encapsulating the core ideas of digitalisation and data exchange surrounding Industrial Revolution 4.0 (IR 4.0) ...."

"...Serba Dinamik are preparing ourselves for the challenges by embracing the advance technologies of the IR 4.0 that includes what is called a Smart Maintenance and Manufacturing,” Dato’ Karim said.

“It is the new approach to combining traditional maintenance and manufacturing processes and technology such as the Internet of Things (IoT) to improve automation, communication and use of real-time data, “ .....

Read on in Focus Malaysia here.

The Summit and Exhibition is at Pullman Kuching this weekend. Yes, yes at Pullman but do not expect that version of the Sandakan video yet.

As far as Sophia, Bernama reported "her" as "veteran of press events, having reportedly visited more than 25 countries for various prestigious programmes.

"Ever since Sophia was unveiled in 2016, she has generated much interest with several notable milestones already under her belt -- a citizenship conferred by the Saudis while promoting a tech conference in the kingdom and being picked as the United Nations' first non-human 'innovation champion', to name a few."

Told the cousin, "Sophia need to have a useful function. The Japanese sex dolls are already hot selling.

"Could be house helper to replace the maid. Customise the face to look like Neelofa and husbands willingly buy for the wives".

"Itu kena bayar license fee to her", she swiftly replied.

Oh dear, the Japanese can outbid the local manufacturer. Nevertheless, it would still be affordable and safer for the Azmin look-a-like.

Better than waiting for the flying national car that may have flown off and dissappeared after prototype built within the promised one year. 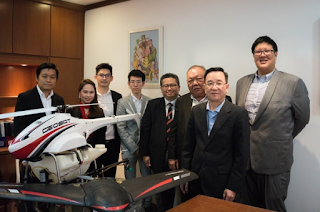 In another development, there is a public-listed company in Malaysia, SWS Capital Berhad that is exploring drone technology in a JV with a Taiwan-listed, Geosat for application into agrobusiness.


A MATA Aerotech spokesman, Wan Azrain Adnan said the efficiencies brought on by drone technology would increase yield and incur less harm to the environment.

The statement added that MATA Aerotech recently demonstrated the drone technology to some of Malaysia's largest agribusiness players and collaboration was underway with them. 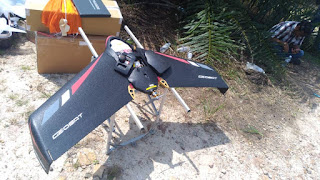 "Producers are able to save millions of ringgit via superior labour deployment, input materials procurement, while also reducing wastage and leakages all along its value chain," said the statement.

"Drones are the next big thing in the agribusiness world. It's going to be a game changer".

Apparently, Taiwan is a leading manufacturer of drone. They have a head start with their drone product meeting millitary standard.

Agriculture is one of many peace-time applications. Artificial intelligence is used to ascertain the right level of pesticide, and fertiliser used thus reducing a major cost item and protect the environment from overuse of chemicals.

The health of the plant could be monitored effortlessly and this directly improve crop yield.

In view of the challenges of low prices of Malaysian agricultural commodity, there is no two way and technology is urgently needed to bring cost down to maintain profitability for various federal and state government land schemes for oil palm, rubber, and other crops.

The social benefit would be to reduce reliance on foreign labour and boosting use of local labour with labourious works such as seed sowing and field surveillance taken over by robotics and AI.

The JV tie-up between SWS and Geosat involved Taiwan government funding for purpose of foreign aid. It is similar to the role of BERNAS which Salahuddin Ayub do not quite appreciate.

The cost for such services is more competitive than doing it themselves and waste valuable time to plan, learn and acquire new problems with existing problems already in hand that need solving.

Instead of suspicious ploy to do the cumbersome amalgamation of land into estates or non-profitable estate management, Felda should immediately deploysuch services to assist farmers/settlers for immediate result.