Anwar's blur and will repeat past mistakes 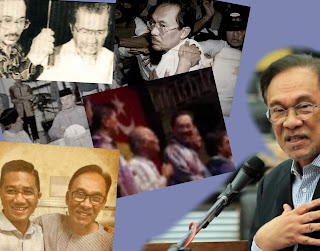 ... Anwar was speaking about nation-building and gave an academic approach to the issue including stressing that all races must live as one happy family.‬ Anwar did not however explain how that can be done. - Raja Petra

The Star headlined Dato Seri Anwar Ibrahim's talk at Parliament as his plan to "accelerate need based policy".

The reports by NST and Malaysiakini headlined as need based NEP and affirmative action to address inequality. CNA was more direct to mention moving away from policies favouring Bumiputera.

Anwar is at the same juncture he was 13 years ago, when he was at a lost. He may repeat to take the same mistaken path and suffer disappointment. 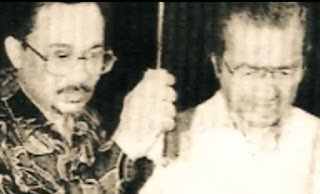 In 2004, Pak Lah won the general election with a landslide. BN dominated 90% of the Parliamentary seats with his new broom and Mr Nice Guy image.

He took a decision to not interfere in Anwar's Federal Court appeal for a review of the guilty decision for his first sodomy case.

Anwar was already in Sungai Buloh prison for abuse of power. It is likely to be the offense Tun Dr Mahathir would use to send Dato Najib to the slammer, and not for the long list of charges.

It is an offense with wide interpretation that any directive could be misconstrued as abuse by any court. A conveniently written offense in the Penal Code to fix officials. It is an abuse of the law, but its legal. 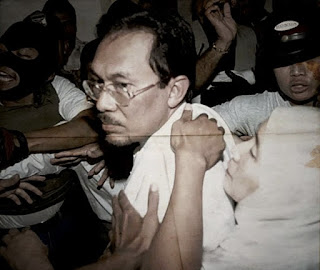 Pak Lah's refrain allowed the Federal Court review to independently decide 2-1 to release him and Anwar was out the year Pak Lah became PM.

UMNO was furious with the release. Subsequently, it became one of the reasons for the uprising led by Mahathir against Pak Lah.

Another is the unhappiness with gatekeepers - Khairy, Kamaluddin, Kalimullah and for fun, the late Kak Endon was included to make-up the acronym 4K worked. Pak Lah cast aside his sahabat network to favour them.

Upon his release, Anwar left for "spine" operations at the Alpha Klinik, Munich and then to Georgetown University, Washington to be a so-called fellow. A Malay study graduate from University Malaya to hold teaching position?

After a bit more than a year, he returned. It was believed then that "Washington" had put together a plan for his political return. 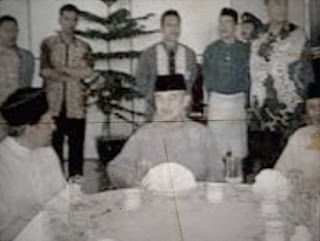 Apparently, the truth is to the contrary.

Anwar still harboured intention to return to UMNO. That was the ulterior motive behind Anwar visit to Pak Lah's Raya open house at Kepala Batas in 2004.

This blog revealed years later that there was attempt to bring Anwar back. It is believed to be the reason Khairy personally delivered Anwar's passport to his house to enable him to fly to Germany.

However, voices within UMNO were loud against such prospect and it dashed Anwar's last hope.

Mahathir started his attack on Pak Lah in 2005. But, Anwar was still clueless of his political direction.

The struggle of Parti Keadilan Nasional was to free Anwar. Now that he is free, Anwar and the then ADIL had no idea where to position the party.

It was in 2006 that Anwar was advised to take up good governance and fight against corruption as their calling.

Initially, he was sceptical as it means continuing a multiracial line. It also mean being critical of NEP.

Anwar was told there was nothing wrong with NEP. Eradication of poverty cuts across all race. The problem lies with implementation and leakages.

He remained hesitant as he felt it was  difficult to carry through against the appeal of "Malay agenda", Pak Lah's slogan at the initial part of his premiership.

ADIL was left with only a seat in Parliament in 2004. Leaders and activists began to leave the party.

The god-send came when Khairy and Kalimullah detoured the Malay agenda to a centrist disposition.

However, there were those fighting for his release through the reformasi cause left PKR. Quite a number rejoined UMNO and was wrongly interpreted as making the way for Anwar's return.

By the time it was GE 13 campaign. Anwar upped the ante to promise Lim Kit Siang as Deputy Prime Minister. 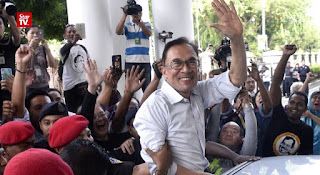 High Court acquited him in 2012. However, an appeal was filed. By 2014, the decision was overturned by the Court of Appeal. Federal Court affirmed the decision in 2015. He was sent to Sungai Buloh to serve time.

Anwar was released and consequently pardoned by Agong last year 2018. Clueless from his years in prison, he is again criticising NEP but on the same breath trying to mitigate any political fallout by the new need-base NEP term.

It is an ambigous term to please everybody but it will not work. With UMNO in partnership with PAS, and his quarrel with Azmin is eroding his influence in PKR, Anwar is in a dilemma.

He could not criticise NEP outright like before, and lose more Malay votes. At the same time, he cannot be seen to push away the non-Malay voters. There is a voice questioning why PNB and Khazanah falls under Azmin and not Minister of Finance.

PKR has strong Indian presence, but it is  not sizeable and nationwide. As far as Chinese votes, it belongs to DAP. PKR has to be seen to be acceptable to DAP to secure Chinese voters. 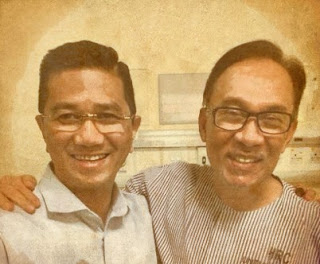 The PKR MPs supporting Azmin and indirectly, Mahathir could be more than the earlier number of 5.

Anwar may have made a mistake to offend PKR MPs and party leaders by insisting those present at PKR Retreat to sign SD of support for Anwar.

It is olden days UMNO tactic and indicative of insecurity and paranoia. Azmin may have gained 10 more PKR MPs support.

Anwar may have intentionally had some of his men among the signatories to call for truce as excuse to pull his brake and reassess.

The presence of Tian Chua among the signatories could indicate his support for Anwar is wavering. NGO activists within PKR maybe moving away from Anwar. Tian was appointed a position and given livelihood by a Baru Bian, a state PKR Chairman not supportive of Anwar.

Dato Dr Ahmad Zahid announcement last week of UMNO's Supreme Council decision to not support DAP or any party in bed with DAP was a death nail for Anwar. His response to question UMNO as DAP phobia sounded naive and desperate.

Mahathir may not have the numbers too, but he remained steady and giving perception of strength. 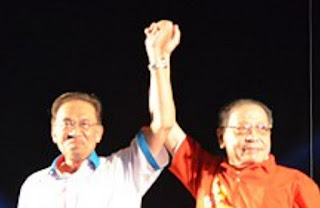 Amanah is expected to remain in coalition with DAP. On the other hand, they could pull a surprise to support Mahathir for practically appointing all their MPs to  Ministerial positions.

Anwar has to offer to DAP more than the position of Minister of Finance to guarantee their support.

When push comes to shove, Anwar could end up re-offering the post of Deputy Prime Minister to Lim Kit Siang.

As Minister of Finance, Lim Guan Eng is already running havoc to the economy. With Papa as Deputy PM, nothing less than a major catastrophe of an earthquake preportion is forthcoming.

Pak Lah's 2004 landslide left ADIL with only one seat. This time PKR is split between Anwar and Azmin. A possible repeat of the past.