Mahathir's manouver for Najib not to attend coronation 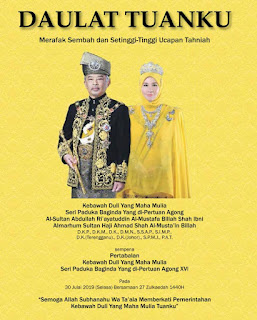 Despite hue and cry over resistance by a Chinese printing company to give workers off day, all plans for the official installation of the new Seri Paduka Baginda Yang DiPertuan Agong went according to schedule and ran smoothly.

All the seatings were in place last night according to Tuanku Abdullah wishes to be done in accordance with gazetted protocol.

Sources claimed there was a bit of commotion when a member of the royal family checked at night to find someone pulled a fast one to place Najib's seat in the back row. 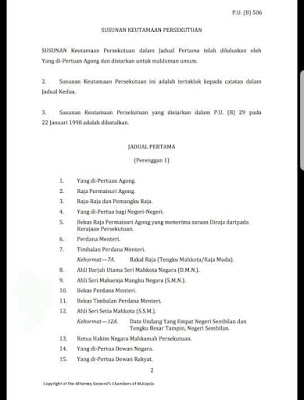 Palace was not pleased and insisted they are above politics. The seat should be arranged in accordance with the government gazetted protocol.

Seats were rearranged accordingly and it was left untouched till around 7 AM this morning when PMO official came in.

The officer requested Najib's seat be moved and placed in the Orang Besar Pahang row. As Dato Shahbandar of Pahang, Najib could be placed there.

However, he will be required to wear the ceremonial clothing of Dato Shahbandar. Time is too short to do as Najib has to be at the Istana Besar by 8.30 AM.

The person usually assist him in putting on the elaborate ceremonial samping had to brought over from Pekan. The common folks may not appreciate it, but in the royal court ettiquete, Najib is expected to respect and adhere to the dress code.

The palace refused to compromised on the protocol and succumbed to a last minute stunt by Mahathir to disrespectfully get his way with the sovereign. 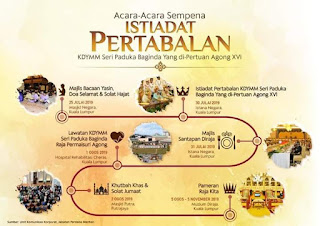 According to the source, the PMO official threatened that Mahathir will not attend this important leg of the installation program should he be seated with Najib within his vicinity.

It is either his vengence towards Najib has not abated or he is too embarassed to face Najib whose SRC case has yet to legally prove he commited anything wrong.

Mahathir knows that his whole PH government will collapse should he interfere and "force" the court to imprison Najib for abuse of power.


There is the possibility that Mahathir could be most uncomfortable to face two of his current political victims - Anwar and Najib - all at the same time.

The guilty conscience, if he has one, could be unbearable.

The only possible end to the impasse if for Najib to not attend. The gentleman he is Najib mengalah (Malay for gave in).

However, it will not be the last from the keling mamak son of a Kerala Mayali. One will expect his media officer and propaganda team to pre-empt and hurl Najib with insults for disrespecting the Agong by his non-attendance.

The Ratu Nagas and Parpukaris will accuse Najib as coward to face up to Mahathir. Will not be surprise Mahathir himself will pass some snide remarks.

However, it is only expected of a Prime Minister under pressure, who kept going abroad, wasting RM14 million taxpayers' money, and not brought back anything but words, sales of assets and more debts.

Mahathir is in a quarelsome mode and is in an open quarel with Najib, Anwar,  Lim Guan Eng, and Muhyiddin. It would not be a surprise if anyone speculate he is even quarelling with his sons. 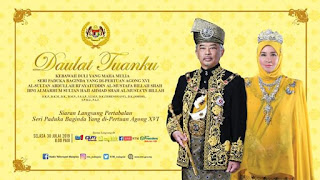 There is a live telecast of the historical installation. 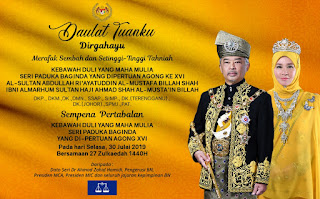 Pertabalan of DYMM Seri Paduka Baginda Yang Di Pertuan Agong is not a coronation but installation. Apologies for the terminology oversight.
at 7/30/2019 10:37:00 AM

Happy to hear some Orang Asli in Pahang and Malay saying waste of money, time and space to maintain this Timber robber and also his support for systemic genocide....go to H@#$%^&*(&@#$%^&ptui!

There's nothing great about being the greatest manipulator in a tea cup vis-a-vis a leader in say, the us, europe, china, Russia ect.
The only fresh air in the much hyped "m'sia baharu sloganism" is an old old old...agashly OLD recycled pyscho-political expediencies that's leading the nation into fairy tale disaster
@in short,a nought.
What's real is, the nation is undergoing the Stockholm syndrome!
Ah well...que sera sera

are you really a BUMI? or just a coward pretending to be BUMI?

Anonymous said...
This comment has been removed by a blog administrator.
10:00 PM