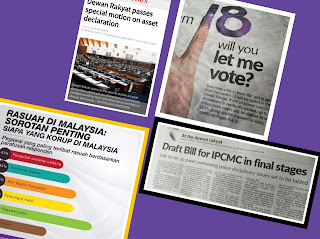 Despite claim it is infested by DAP inflitrators, The Star remain a BN-owned newspaper.

There was a cross deal in the market on Media Prima and it turned out UMNO sold their minority stake to Tan Sri Syed Mokhtar. It is a confusing situation. Is SM is still with Tun Dr Mahathir as his NGO office at Yayasan Bokhari is still in operation and seldom used for press conference? Or he still maintain relation with UMNO?

Media Prima is controlled by a fund managed by Morgan Stanley. It is speculated the fund is Tun Daim's.

Back to the subject in hand ... 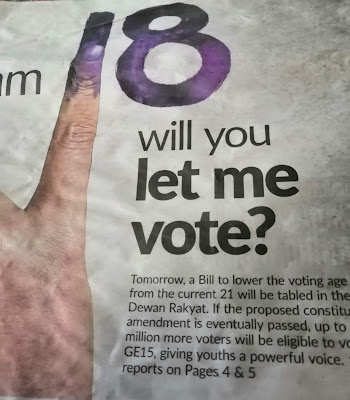 On the tabling of a bill to lower voting age to 18, there seemed to be agreement on both sides of the political divide, except for PAS.

Their stand is priority should be for registering some 4 million unregistered citizen over lowering the voting age.

That is quite legitimate but the real reason is sceptical of the ulterior motive behind government move.

UMNO is in agreeable to lower the voting age, but Dato Ismail Sabri placed a condition for automatic registration.

This bill cannot get passed without a two third majority. Government side need the opposition to back this bill as it constitute a constitutional amendment.

Unlike the TH restructuring where Government did not arrange briefing to be given to opposition, there is briefing from government for opposition for this bill. 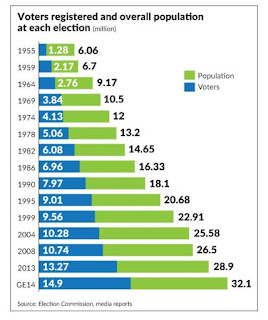 According to The Star:


The country records about 500,000 births each year and lowering the voting age to 18 from the present 21 means that everyone who is 18,19 and 20 years old would be able to vote.

This means that up to 1.5 million more voters will be eligible to vote in GE15 if the proposed amendment is passed.

Malaysia’s population is currently 32.75 million and if the amendment is passed, it would also mean that more than 50% of the country’s citizens will be eligible to vote in the next general election. 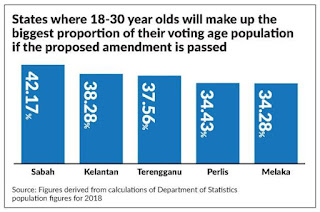 It could mark the end of the dinasour-ic gerontacrasy MPs, but will it?

The government side, as argued by Syed Saddiq, claimed Malaysia is one of the few countries in the world to still have minimun age of 19 and above.

How does that apply to PH cancelling GST?

Among the youth, their view is still mixed. Some of the youth interviewed by Star felt 18-year olds lacked awareness, and knowledge on politics. Generally, they lack the understanding and could not appreciate public issues and current affairs to make the right voting choices. 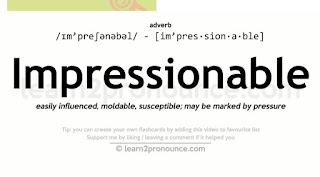 Analyst say it is too early to detect the effect, thus why make such a change without any idea of its possible outcome?

Believe the 18-year old voters is seen as easily swayed by rhetorical, unrealistic and emotional factors. The highly propaganda campaign of ruling parties viewed it as to their advantage.

The personal experience of seeing 18-year olds vote was back in college in New York 40 years ago during the Carter vs Reagan Presidential election.

Malaysian 18-year olds generally have yet to reach American youth level of seriousness and maturity.

Politics, governance and citizenry are taught in US High School, but not in Malaysia. Our civic classes are too basic and hardly provide sufficient understanding on governing, public interest and current affairs.

Malaysian 18-year olds understanding are coloured by their teachers, peers and family than their ability to make fair personal assessment.

Yes it is not fair to judge them prematurely and they should be given a chance. And agree that it is a process towards political maturity. Then consider it as a challenge.

Nevertheless, the need for political education not only applies to 18-year olds, but adults too and the GE14 proves it. Will government make any serious attempt to do anything about it? Nah...

Voting comes with a sense of responsibility. Late father assumed more responsibility and far more mature in his early teens  than any present day adults.

This is in no way saying 18-year olds are not responsible. Today, 18 year olds are still dependent on parents and not many had the experience of managing their own life and finances.

One hardly find Malaysian teenagers independent enough to do odd job to save money to get something or summer job to pay college tuition fees as the American teenagers do.

Even that, few freshman dormitory mates voted for the American Communist Party just for the fun of it.

Are 18-year olds today ready and serious to assume the responsibility to vote?

In his letter to The Star, Dhesegaan Bala Krishnan felt voters apathy will dampen any expectation. Given the right to vote will not make them come out to vote.

Since Najib mentioned security on the asset delcaration issue, the same applies to politicians meeting and influencing the impressionable teenagers to talk politics.

Leave it to Husin Lempoyang to express his concern. 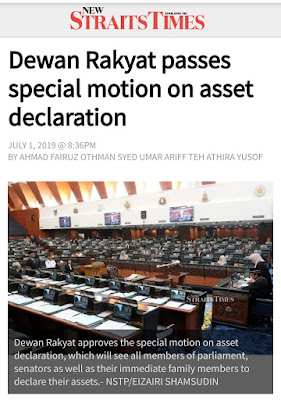 Dewan Rakyat passed a special motion to require all Members of Parliament to make an asset declaration. The louder "aye" from the government side carried the motion.

It was debated with basically all MPs supportive of the bill with reservations from the opposition. PAS has their own unique reason on the manner the wording is made:

Dato Najib raised the issue of other incomes, already available government bodies to check for anything dubious and security threat for making such declaration.

Those having possession of the asset declaration could be a source of threat.

Issues were raised of Ministers not making their assset declaration as promised in PH manifesto. There are declaration made not believable. 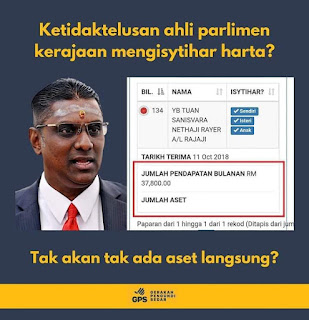 The intention to address corruption related to lawmakers is fair but in the land of adhoc Malaysia, policies formulated and laws passed are seldom not thought through. It tend to a facade to put wool over public eyes as it is hardly effective measures.

A seasoned observer of politics shared an old story of an uneducated Menteri Besar. He hired an unschooled. but cunning, as his assistant.

And, the assistant went out of state and set-up business ventures by having as partner a royal with a lawyer/politician husband. Sorry ... they are famous people and names are to be withheld.

From there, they would bid or get offered projects from within the MB power. The proxy prospered and helped finance the politics of the MB.

The quality of the MB leadship is poor. And he is not the only proxy of the MB.

The astute observer believed this sort of happening will be more rampant with more Ministers have fake degrees.

Instead of having to end corruption, this short sighted policy will widen the politically related corruption. 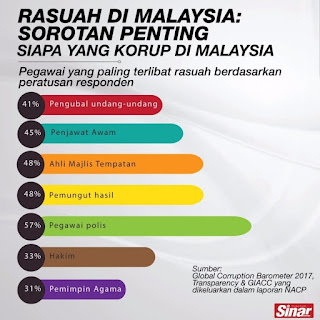 This is still half measure to cleanse the funding of politics. Why not do away with restrictions and remove the need for big budget campaign funding?

Corruption can be reduced that way. Government could allow access to public facilities to all parties to hold rallies. Do away with putting up flags, banners and posters by providing fair media coverage. Keep campaign cost low by setting the cost and only allow fund provided by government. No side will have undue advantage.

This blog has written of it many years ago. It is not a view formed after losing GE14.

Corruption by lawmakers are seen as only 41%. Local council, civil servants, tax collectors and police are viewed as more rampant in their corruption.

The survey view of corrupt judges is 33% snd men of cloth at 31%. Still too high!

After the brouhaha over many years and media drama by SUHAKAM, the draft bill for IPCMC is now in the final stages.

Not much is revealed except it will be different than the EAIC.

In an interview last month, he expressed his seriousness to weed out the bad elements in the police force particular on corruption related gambling.

The gambing syndicate in the country do not exist any more. There is but only 10% left.

They refused cause all have gone online and servers are parked abroad.