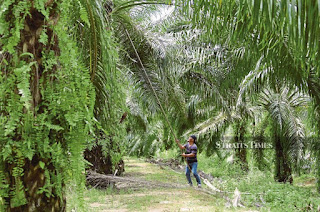 The government may want to engage directly with the settlers to get their support — convince them that the merger exercise would, in the long run, benefit them. They have nothing to lose. - Salleh Buang

There was hardly any arguments to convince the public that amalgamation of smallholders land to be managed but that became the title.

In fact, the above quote was the key takeaway of Salleh's article. He was dwelling on the legal ownership of settlers' over the land and hardly expressed his agreement.

One can assume that Dato Abdul Kadir Jasin loyalist and NST acting CEO, Mustapha Kamil Mohd Janor has started the public relation exercise for Felda amalgamation after the disastrous launch on Hari Peneroka past week.

Can Azmin be trusted? 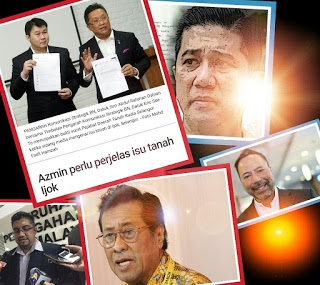 Dato Seri Azmin Ali denied he was "booed" and his boys were saying settlers left the hall early to eat.

Obviously, it is unbelieaveable and an amaterish attempt at crisis management. More so, he has been booed and sabotaged before to promote the amalgamation shareholders' land.

Azmin was reported by media somewhere that we (the government) are going ahead. Few days later, Azmin gave assurance government's plan will not affect their ownership. That is the key problem and Salleh saw that.

It does not help to have Tun Dr Mahathir and Chef Wan commented on the prospect of oil palm and insulted settlers as lazy.

As far as Chef Wan, read the Myth of the Lazy Natives and if he has intelligence more than the vegetable and spices he cook, then he has a chance to get out of a colonised mindset.

This is the age of Internet openness and free flow of information. Azmin should not assume the settlers are not aware of what happened to the settlers of Selangor's copycat of Felda program in Ijok.

And, Azmin must face to the questions and scepticism of the public on the plan to amalgamate smallholders' land. He  cannot shy away fro Parliament to avoid embarassment of the Sandakan video.

Why Civil Engineer as Felda CEO? 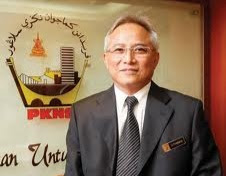 Any decent Felda settlers may wonder as to why Azmin appointed a Civil Engineer, with background in property development, project management and construction.

The state government entity under his charge was only playing lip service to the social role of the agency to provide law cost housing (later changed to affordable housing) for the public.

Unless second or third generation Felda was involved in the infrastructure development boom of the 90s and 00s, they would not have known of happenings in PROPEL.

The new Director General of Felda then forsaken the social role of PKNS, thus why was he then chosen to lead a social agency? 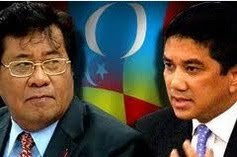 The quarrel then between Tan Sri Khalid Ibrahim, when he was MB of Selangor, and Azmin, who was in pursuit of the position, culminated in Dato Osman Omar not being extended his contract.

Is Felda going to go big into property development?

If so, it would seriously be a strange move after one monster known in PPBM circle as DMK hustled and forced former Felda Chairman, Tan Sri Megat Zaharuddin to stick to CEP directive to liquidate investment and abandon any plan to make Felda into a short-, medium or long term self sustainable outfit.

Megat is a Shell man that has multinational exposure, then taken in by Dato Najib to be Maybank Chairman, and is certainly capable of preparing a plan for Felda.

Not only Megat may have run afoul with the one research sensation economist, talk is Azmin's choice of CEO was running in a different direction from the Chairman.

Why Daim's sudden interest in agricuture? 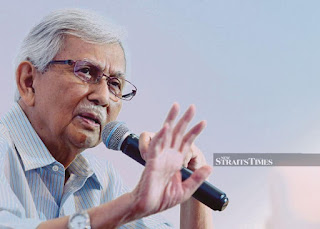 The Felda settlers may not remember this pieces of political past and knowledgeable enough on corporate matters.

They may not be curious as to why Tun Daim was suddenly talking about agriculture in June. It is too glaring that Dato Ahmad Talib wrote a piece to ponder on the sudden change in Daim.

Daim was talking about the way forward is agriculture as though for the past 40 years Malaysians have not realised the high food import bill, need for food security and lack of government will to upgrade agriculture to mechanisation and modern farming.

It was a surprise to the public as to why Universiti Pertanian Malaysia was turned into Universiti Putra Malaysia and may have lost its strength in agriculture.

Tun Abdullah Badawi had realised it earlier than Daim but was not allowed to develop it further. Hs advisers too were not keen to move it.

Clearly, Mahathir neglected the agriculture sector and was so obsessed with manufacturing without seriously developing a manufacturing culture. It was purely copy paste manufacturing taking advantage of low cost labour.

He was still at it and was only given a rude awakening upon assuming the Prime Ministership again. The world had changed and he could only realised it when Dyson rejected Malaysia's offer. High labour cost Singapore was selected.

Mahathir's argument in favour of manufacturing over agriculture then was an acre of land for factory provide more jobs and is more productive than an acre for farming.

His idea for agriculture was purely commercial cash crop and ignored the trend of rising food import. Policy makers were saying it is cheaper to import.

Ahmad Talib was right to be surprised because Daim's interest had always been in the area of finance, capital market and financial assets such property. His idea of investing in industries is to be buy distress asset for cheap with all known business risk mitigated and revenue guaranteed.

Daim hardly is interested in businesses that require in-depth knowledge and wide range of skillset. Infrastructure development or public projects is his rojak on weekend, but not businesses that need long gestation period. 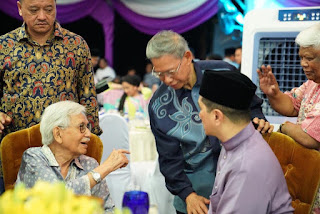 What is the issues or opportunity he had identified to want the country to "revert backward" to agriculture? As Daim pointed out, result from the return to agriculture is a long term move. Why is it he is willing to wait?

Leopard never change spots. It may have found a new prey but pretending to look the other way.

It is not normal for Daim to attend social events with large crowds. Recently, he attended Azmin Ali's Hari Raya gathering at his home. Joceline Tan interpreted it as Daim lending support to the Azmin, but he is not still in the clear yet.

The timing with the announcement and launch to amalgamate the Felda small holders land is impeccable. The Raya gathering was just before last week's launch. 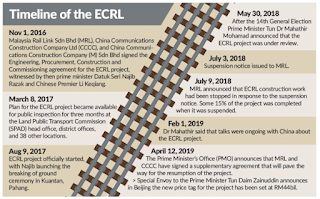 One need to remember that it was only in April that Daim managed to finalise the new route for ECRL. He talked about savings but it did turned out so. 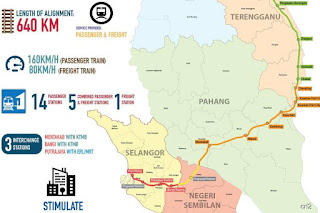 The route, originally planned to start at Gombak to cater for east coast passengers and stopover at Bentong as potential new daily commuter centre, was re-routed to Putrajaya and KLIA to Mentakab via Semenyih.

Was it meant to benefit some land owners along the new routes?

Anthony Loke said then that land owners along the route will be compensated. It is obvious and no need for mentioning. Was it to preempt something?

MCA President, Dato Dr Wee Ka Siong raised a question on whether there was side deal to sell land to China's CCCC. MIDA could only deny no MOU for exclusivity of land determined or granted.

New terms for the ECRL was also criticised heavily in the current Parliament seating. 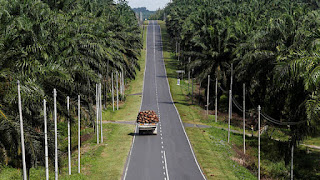 The idea to amalgamate land and manage it as estate management is not new. It has been attempted under various public and private initiatives. ECER had introduced the Agropolitan concept and successful model can be found in Sabah and Sarawak.

However, the problem lies in the current brutal cutback undertaken by Lim Guan Eng on advise of Tony Pua. Participants may not achieve the desired level of monthly income to sustain living. Mahathir promised the land amalgamation would increase income.

An attempt to do so for rubber in Kedah many years ago found themselves burdened with the huge with initial capital outlay.

Felda have been doing such estate management activities under their subsidiary, Felda Technoplant Sdn. Bhd. However, it is not as profitable and made only RM2 million a year despite revenue in the hundreds of million.

For Felda to undertake such a massive exercise involving a million acres of land, do they have the money to do so? Will the DAP-controlled Ministry of Finance play ball to commit money to such social program they would deem as benefiting only Malays?

The exercise to undertake the amalgamation may take a long time. If the plan is to plant durians, coconuts, pineapples and bananas and Felda is still at a planning stage, then it will be, but another "warm, warm chicken shit" (literal translation of Malay proverb hangat, hangat taik ayam) plan or ploy.

Agricultural reform of Felda on massive scale cannot be undertaken by a Civil Engineer, not trained in agriculture using purely his limited agriculture knowledge from growing up in Rengit, Johor.

Oil palm estare management have to meet RSPO requirement. Estates have given up trying to RSPO. Higher cost RSPO oil palm not taken up and ended up selling at non-RSPO prices.

Felda is doom to fail as rising social expenditure is crossing path with declining productivity.

However, this amalgamation plan could be designed to fail. The suspicion is the land amalgamated will only be along the ECRL route. By then, the management company will end up selling the land to developers. The Ijok story will repeat itself.

Former Selangor MB, Dato Dr Khir Toyo is right to described it as drying up the ocean to pursue a whale.

By the way, the lawyers appointed to handle the Ijok matter were Rasiah Sivarasa, and Latheefa Koya of the firm Daim & Garmany for the settlers, and N Surendran for the state.
at 7/15/2019 11:01:00 AM

Only one thing to say here.
Just how many generations of Felda settlers need to be spoon fed. Given everything from the womb to the tomb and their next generations are expecting to be fed for eternity!
What a useless bunch of peoples born on this planet Earth.
Rent seekers extraordinare.

How many more in FELCRA, RISDA? Who is paying for all this subsidized "humans".
Not an ounce of shame!

And they will still scream maruah bangsa whatever it means to them!