Wish You Were Here

And did they get to trade your heroes for ghosts?
Hot ashes for trees?
Hot air for a cool breeze?
Cold comfort for change?
And did you exchange
a walk on part in the war for a lead role in a cage?


This is the only visual found thus far in the newspapers, tabloids, and websites of our Friday adventure. What do you aspect? We were in the opposition party show. Despite their predominant, we two big white plastic banners and at least one is seen.

We were there under a non-partisan group, although seldom wrongly perceived by the public and observer as partisan. That Friday we were there on an issue that has sparked the displeasure of substantial and significant Muslims and Malaysians in this country, cutting through their political, racial, and religious persuasion. Some may not be able to understand the significance of it, but what can we say.

The publication of the satirical Non Sequitor cartoon by Willey Wiley on February 22nd issue of New Straits Times (NST) is not as blunt and rude as those by Jyllands-Posten, the Danish newspaper.

If you could understand, it is equally bad as it make light of the serious issue that angered the Muslim worldwide.

I found a more offensive cartoon published earlier on February 18th by NST (below) depicting Muslim subtly as lover of violence, women roving eye and brainless law enforcers. Such cartoon gives the impression that this is the norm and it definately wasn't any intellectual satire. 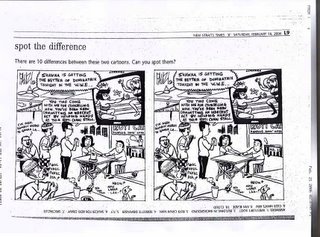 Even with all the commotion, another Non Sequitor cartoon (below) on February 23rd depicted in a lighter mood satiring Prophet Noah.

For long, it was the unethical journalism, vindictive writing and crude newspinning orchestrated by Dato Kalimullah and Brenda Pereira of NST I found extremely distasteful. Their writings have been injecting discenting agenda that in my view can be disruptive to the harmony of Malaysian society.

Who are they to be preacher when they used to be vocal critics of this country? And, it is the same ruling party and structure they were against?

Their response in "What NST Says" and so-called "Unreserved Apology" are blatant arrogance to even republishing the questionable cartoon. Answering your actions should be an explanation and not concorting assumptions and deflection blame to others. An apology is only apology and nothing else, not repeated denial and childish dragging of others.

Our people were few but we were visible. Only had... wish you were here. 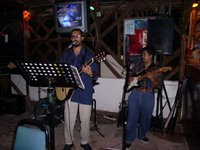 We met on the beach amid rumours of war
Your head in your hand, what you saw you won't say
As the newspapers blew in the wind
I can see you're one of that kind
Who carry round a time bomb in their mind, no one knows
When you'll slip the pin
Rumours of war
Rumours of war 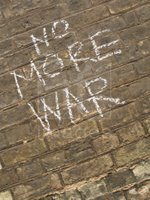 I see that your dress is torn at the edge
You were lost, intense, like a man on a ledge, waiting to jump
As the waves break over the shore
You say there's a storm that can't be delayed
And lately it seems to be comin' this way, you can hear it break
Like the slam of a door
Rumours of war
Rumours of war

You tell me, just look all around
At the past and the present, the cross and the crescent,
The signs and the planets are lining up like before
There are souls on fire in the day and the night
On the left and the right, in the black and the white
You can see it burn in the eyes of the rich and the poor
Rumours of war
Rumours of war


I haven't been able to up-date my blog awhile... been somewhat busy. And, spending time at home searching for Ali's misplaced press clipping. It was moved that was why I couldn't find it. Mind you, what seemed such a dissarrayed working desk is actually a finely tuned arrangement :-)

Continuing my dedication to Blues Treat and D'Attap is this Al Stewart song, rearranged and delivered with such feist. It left an indelible reminder of many impending next target of the Israeli-Anglo-American war complex ... next being Iran and perhaps Syria.

It looks inevitable. They are quite preset to set aside any explanation on the nuclear facility in Iran. While Iran may deter it with smart manouvering with the Russian, they could come with a price for the Iranian. And, the "invaders" seemed to got their logistics in place and just to roll out the battle.

The reluctant party in this so-called War Against Terrorism has been Western Europe. I believed the cartoon controversies on the Danish newspaper was intended to turn the public opinion of liberal Scandinavian sympathy to Muslims into haters. With one stone and judging from blogs, websites and newspapers from Europe, it could have affected Western European psyche.

The so-called liberation of Afghanistan left these two countries into a shamble. Life is not any better. In Iraq, after so-called instituting democratic election, they disallowed the winning majority Shia and led the country into a Civil War. Hamas wins handsomely in Palestine and they are out to starve every living Palestine soul, even their Christian breathens.

I think they way they are acting, where reason and justification is put aside are typical attitude and irrationality of War. And its not anymore just a ... Rumour of War. 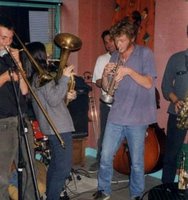 Another favourite number and "trademark" of Blues Treats at D'Attap.

Sultan of Swing described the music life with a scene at a music joint as the background.

There are dedicated fan that can come just to "feel alright when you hear that music ring" and appreciate ".... not to many horns can make that sound".

The typical unappreciative crowd with a stereotype taste of music. And, the musicians obliged to please.

When the nite is up, we'd have a fast finale to end it. The music stops, fans leave and musician pack. And, all look forward to come again next Friday nite.

You'd think its nuts why a bunch of people spent their time, money and life for music. Thats what doin' something for the love of it. You dedicate yourself to it even if the reward you are likely to get is pennitence.

For the love of music, you guys of Blues Treat '... are the Sultan of Swing'.

Big wheels keep on turning
Carry me home to see my kin
Singing songs about the Southland
I miss Alabamy once again
And I think its a sin, yes

Well I heard mister Young sing about her
Well, I heard ole Neil put her down

Well, I hope Neil Young will remember
A Southern man don't need him around anyhow

In Birmingham they love the governor
Now we all did what we could do
Now Watergate does not bother me
Does your conscience bother you?
Tell the truth

Sweet home Alabama
Where the skies are so blue
Sweet Home Alabama
Lord, I'm coming home to you
Here I come Alabama

Now Muscle Shoals has got the Swampers
And they've been known to pick a song or two
Lord they get me off so much
They pick me up when I'm feeling blue
Now how about you?

Sweet home Alabama
Oh sweet home baby
Where the skies are so blue
And the governor's true
Sweet Home Alabama
Lordy
Lord, I'm coming home to you
Yea, yea Montgomery's got the answer


I had written about this song sometime back and couldn't place the pictures in. By the time I got round to do so, the whole posting disappeared. So here I am reposting and wonder if I could recall what I wrote about.

This song is regularly played at D'Attap and I've got the picture Rfizan the front man with axemen Tapok by his left and drummer Arul at his right.

Someone commented to call Lynyrd Skynyrd a racist band. Sure they are mean rough neck lookin' fit the bill. And, when you hear the song is about Alabama, pow ... you are reminded of Klu Klux Klan, Governor George Wallace, etc.

Yes, I had the bad experiance of stopping over at a gas station in Birmingham, Alabama at night to be subtly told by a cop to get out of town.

As much we hate racism, it is equally wrong to stereotype all people as racist.

This song is exactly about that. Neil Young wrote two songs, Southern Man and Alabama, about racism. Lynyrd Skynyrd replied with this song to warn him of his sweeping generalisation. Read this interesting hyperlinked article entitled Jammin' with Neil on this exchanges.

While we remembered the racist policies perpetuated under Governor George Wallace, I remembered Birmingham used to have a black Mayor. The Reverand Dr Martin Luther King, Jr. organised a peaceful march to demonstrate for rights of black to vote in 1965 from Selma to Montgomery, Alabama.

Yea yea Mongomery's got the answer.