The Star backed company with questionable past for Silterra 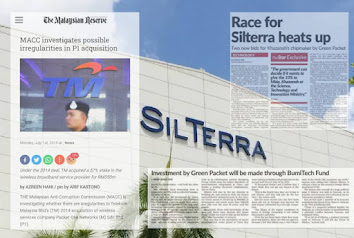 Someone bumped into a Tan Sri CEO of a renown Public Listed Company. He was fuming with Khazanah Nasional. Apparently, Khazanah invited them to submit a proposal to merge with an entity, they repeatedy failed to turnaround.

He was at the top of his voice ignoring passer-by over-hearing him.

"They asked me to submit proposal. When netizen and public whack me on social media, they kept quiet. Now I look bad. I could have just focused on my investments abroad!"

That is not an isolated case of unethical practise by former EPF CEO and now new CEO of Khazanah, Dato Shahril Ridza Ridzuan. Someone with an orang putih temperament should have been more fussy over ethics.

The son of a great man in Malaysia's early history lamented, "There is no more nation builder, bro." True enough, a government entity like Khazanah is pursuing money and putting aside nation building like unscrupulous investment banker, Gordon Gekko in the movie Wall Street.

No wonder they invited a company investigated by MACC to submit a proposal?