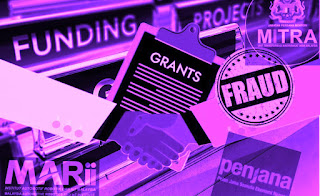 Grant fraud typically occurs when award recipients attempt to deceive the government about their spending of award money.

According to the Department of Justice, using federal grant dollars for unjust enrichment, personal gain, or other than their intended use is a form of theft, subject to criminal and civil prosecution under the laws of the United States.

Such misappropriation have been occuring in Malaysia but remain petty such as research grant abuse to share allowances with unrelated academic colleagues.
There have been more attention to this fraud since. Few years ago there was a call for recipient of FINAS grant be revealed publicly.
Its likely MACC uncovered serious findings on the current priority one investigation into Covid-19 pandemic spending and stimulus package for Deputy Chief Commissioner of MACC, Dato Seri Khusairi Yahya to issue a statement today.
Widely reported by media is Penjana Kerjaya. There are murmurs on misappropriation of the so-called economic recovery initiative involving Penjana Kapital and earlier written, drone company, Aerodyne.
Khusairi wrote in The Vibe today:
Read more »
at 1/31/2023 01:56:00 PM No comments:

BNM Board member is CEO of Aerodyne 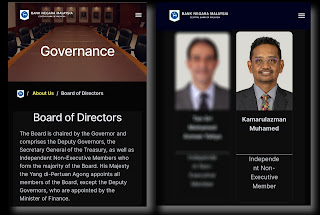 Sister blog, Thick as a Brick put up a posting prior to CNY holiday on Malaysia's supposedly "kereta terbang" company's planned listing with the question: "Is Aerodyne a scam?"

No person accused but since Aerodyne's CEO is a member of the Board of Directors of BNM, the questionable issues and rumours  are best addressed.

Not only the good name of Government department, and agencies involved should be upheld, the related industry players too.

The country's central bank is already tarnished by the alleged bribe and conflict of interest of former Governor Dr Zeti in the 1MDB debacle.

UMNO will continue to remain relevant

The night before the Vote of Confidence in Parliament, there was a Sinar LIVE session last December 15th.
Lecturer for the Centre for Communication and Media Studies, Ts Nurul Aishah Ab Raman expressed the opinion UMNO's brand remain relevant but need changes.
She is right to say so. Branding is important in politics. Golkar is not as dominant as in the days of Sukarno and Suharto, but the known brand remain the party to watch in Indonesia.
So does Kuomintang of Taiwan, Congress of India and LDP of Japan.
Read more »
at 1/20/2023 12:30:00 PM No comments: 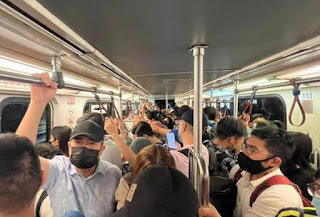 The next day after his appointment as Transport Minister, viral on social media are photos of Anthony Loke unassumingly riding the public train. He has since been seen riding and inspecting the rail facilities on few more occasions.
His regularity invited nasty social media comments calling a political show. Putting aside the snide remarks, Loke is sending the message that his main concern is public transportation specifically the Klang Valley.
Had they known that Prasarana operation lost RM13 billion and building the MRT3 will cost up to RM80 billion, the commentators would have been more judicious.
Scary as it maybe, the Klang Valley population is about RM8 million (2020), which is 24.5% of Malaysia's 32.7 million (2021) population.
To understand the Greater Klang Valley, one need to look beyond Sepang, Rawang, Putrajaya and nearby areas to include as far away as Bentong, Seremban and Ipoh.
Read more »
at 1/17/2023 12:40:00 PM No comments:

Not another effing Sheraton-like move! 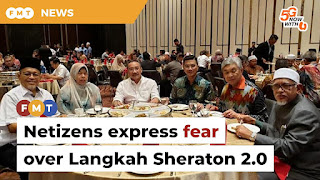 This blog's Monday posting to reproduce Edge Weekly article entitled "Will Malaysia avert a recession in 2023?", was meant to highlight that the economy was the priority for new Prime Minister, Dato Seri Anwar Ibrahim.

High on his list of priority is to avert a cost-of-living crisis for the low- and medium-income voters, and the fear of stagflation.

Political stability is a key factor in addressing these economic issues. Thus there should not be frequent changes of government, be it at state or federal level.

Agong impressed on this, thus the reason his Majesty insisted on a Unity Government as solution to the political impasse from the absence of any party holding a majority.

This message some how did not jive with certain Sabah politicians, which sadly involved certain factions of the ruling parties in the Unity Government.

Will Malaysia avert a recession in 2023? 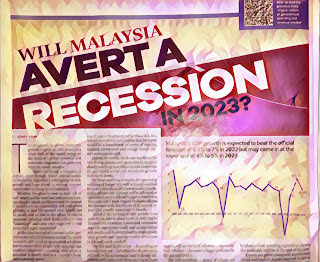 The prognosis for global economic growth is grim as 2022 draws to a close. Talk of the world being on the brink of a global recession and economic stagnation has gathered voice in recent months.

That’s not to say recession is certain, even though major central banks in December signaled a willingness to risk growth and forge ahead in raising interest rates further to bring down inflation.

Whether the glass is seen as half full or half empty, at this time last year, no one foresaw Russia’s attack on Ukraine and the impact it would have on commodity and food prices globally, or that US interest rates would rise so much and so fast in the effort to reign in runaway inflation. Back then, inflation was “transitory” and rates were supposed to stay for longer, remember?

At this juncture, what’s certain is that government and policymakers around the world have to be able to whip up practical solutions fast to ensure their people and economy can weather whatever is coming. And what is practical is closely tied to a country’s fiscal and monetary space.

In the midst of quantitative tightening, is the world dumping the dollar?

The rest of the world is catching on to the easy monetary policy of the West. The BRICS nations are developing a new reserve currency that is likely to be backed by commodities and possibly gold. If this BRICS currency emerges, this is bad news for the West and the U.S. dollar, says Alasdair Macleod, head of research at Gold Money.