Circulating in Whass App groups today is an expose of the Gobbels-esque lie being spread by Tun Dr Mahathir government ...

Firstly, Finance Minister LGE has confirmed that the official Federal government debt is RM686.8 billion, or 50.8% of GDP - which was what was reported by the previous BN Govt. This figure is exactly how the whole world measures its debt.

No Nathan Rothchild could avoid a market black hole 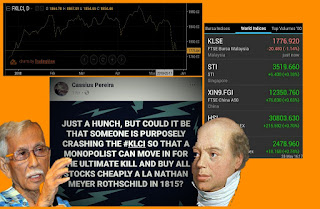 Election is over, so do not quite care of politics. Everything is confusing, directionless and at the extreme, it is heedless.

The government with a ruling party with 125 seats and opposition BN with 79 and PAS 18 is not a stable country. The underlying reason Malaysia attracted investments from abroad over the many decades of BN rule is due to political stability and continuity of the ruling party.

With that changed, foreign investors should look at the transition. Foreign financial media painted a rosy picture of a BN win.

The macro picture that won their heart for Malaysia is expected to change but it could not be done with Tun Dr Mahathir’s loud mouth.

The new Pakatan Harapan government came out from the win with a rather reckless disposition to change everything within a short time and Mahathir could not hold back on executing his revenge towards Dato Najib swiftly.

Lessons to and from India 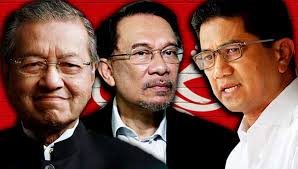 It is the same phenomenon that saw the end of the dominant Golkar in Indonesia, LDP in Japan and Kuomintang in Taiwan. So it is not for certain that the Indian experience was considered.

And, it is not for certain that the post victory possibility for Malaysia could be any different from India.

Its too early to call as the dynamics is not an exact science determined by macro factors but also filled with the intrigues of individuals and micro factors in the art of politics. 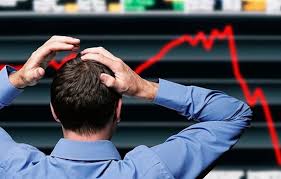 A market player was lamenting yesterday of foreigners not only sold their stock market holdings but went short.

What actually happened is more startling than the report by The Star here of foreign investors selling-off RM2.48 billion worth of shares caused the biggest fall to the Bursa since August 2013.

Singapore's Business Times here reported all the foreign inflow into the stock market for 2018 outflowed within days after the general election.

Prior to the election, foreign analysts forecasted BN to win and were generally supportive of the macroeconomic policies of former Prime Minister, Dato Mohd Najib Tun Abdul Razak.

The BN loss was not taken well by foreign investors who views the unconventional policies by the new government not to their liking and would be disruptive to the Malaysian economy.

Words coming out from the new government leaders does not indicate any intention to win back their confidence. 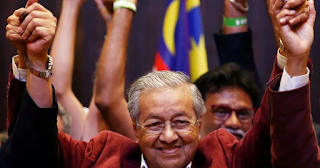 Tun Dr Mahathir was repeatedly defeated by Dato Najib in few battles but he did not give up and took his fight to new boundaries.

The consummate politician and dictator won another political war. Admittedly, we lost.

Though still believe it was a justified decision to leave him and stayed to defend the institution of UMNO and government, it is better to refrain from doing a post mortem.

There is a long list of concerns that came out from election result. The concerns are political, legal, economic and national in nature, but it will have to hold first. 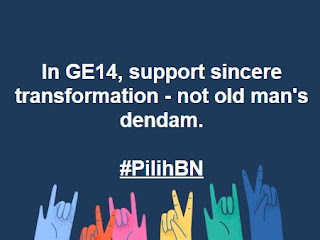 Lim Sian See's FB posted a message that incapculate the gist of this general election.

The writer described the poll as more of twist and turn more than a Shakespearean play to topple the government than any substantive policy differences.

The column by The National below: 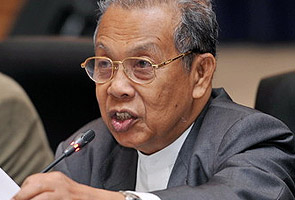 We received a WA of a pdf statement of former Chief Justice, Tun Abdul Hamid Mohamad.

Quite familiar with his writing. The language seemed to be him. More so, the sender is a credible political analyst. It is considered to have come from reliable source.

If it was yours truly, some would brush it off as one sided, pro-Najib leaning, and makan dedak.

However, this is coming from one of the two Federal Court judges that favoured the release of Anwar Ibrahim for his first sodomy charge in a judicial review.

This video came out two hours ago and already has more than 32,000 views.

One could only expect Namewee to be critical of government. The interesting part of this video is he is also did a satirical whack of Tun Dr Mahathir.

Equal opportunity critic? He he he ... 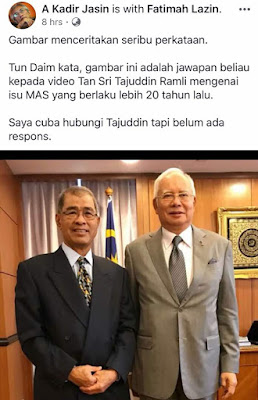 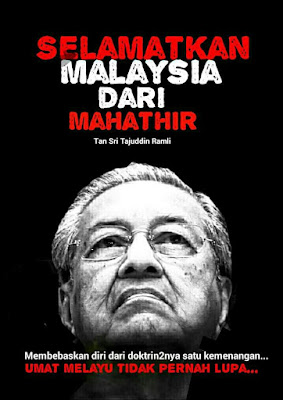